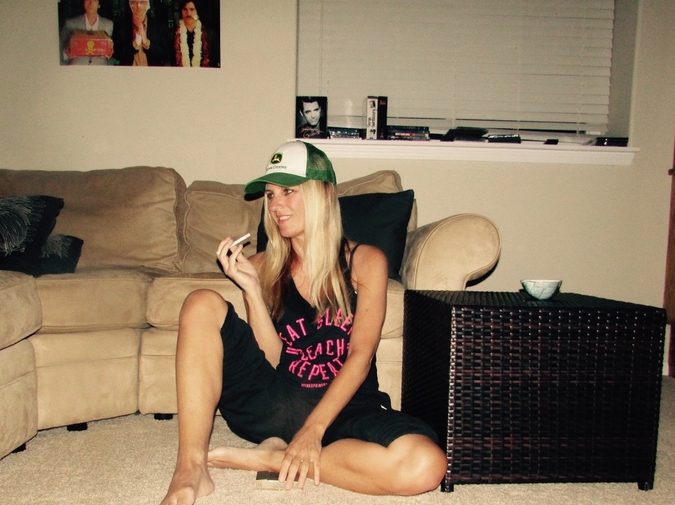 I was walking and listening to Joe Rogan again

All I did now was walk and listen to Joe Rogan

It reminded me of the early 90s

When all I did was smoke cigarettes and watch David Letterman

I was a shut in then, too (anxious, panic attack prone, depressed)

How would I get through Covid-19 without Joe Rogan?

Luckily, I didn’t have to

Every day it seemed there was a new Joe Rogan podcast

And almost every day the new podcast

I liked listening to scientists (now)

They soothed and calmed me

All their knowledge coming out so quietly and calmly

Like a Mr. Rogers’ conversation with the camera while putting on or taking off his shoes

I felt calmed as I did when I was five and watching Mr. Rogers in my grandmother’s living room

I envisioned these scientists wearing cardigans like Fred also

Because it was the only place I heard anyone talking about

Civil liberties (abt the potential loss of them, I mean)

No one I knew seemed at all concerned about them

(Netflix is the opiate of the people!)

I thought, “You know, you could have enforced family time before Covid-19;

You could have made your kids eat dinner with you, help you cook,

Watch content with you without the aid of a pandemic as an excuse or a reason.”

People with families didn’t understand there were people without

People who were alone, lonely, depressed

Suicidal; what did they care as long as they had their

What did they care about the loss of civil liberties

When there were so many new shows on Netflix

And they could order their groceries now for pick up

When they could feel safer than they’ve ever felt

Between the U.S. and Mexico

Safety was the issue there too,

How could we know whom to fear?

Anyone not us could be dangerous -

How could we know?

Best to lock down with our families and watch Netflix

While we all lose our civil liberties

And our friends without families grow more and more depressed

Who cares about silly things like personal freedoms and suicidal depression

Sometimes I listened to other podcasts

I listened to Katie Couric, too, sometimes

Katie had on a man who was a former surgeon general

The former Obama surgeon general had made loneliness

His platform, after touring the country and discovering ppl were lonely

Loneliness, he found, was the reason for so much suffering:

The common denominator: people were lonely

I was extending my walks now

It was good to hear someone else (read: not me) talk

(read: I was lonely)

The person Joe Rogan was talking to was another scientist

the scientists were all running together in my head now:

about war and grandfathers and love

there was the one who wore a mask on the show

(oh, maybe that was the same scientist, who did both of those things,

come to think of it; maybe they were all the same scientist! Maybe I was going crazy

through her television set)

I didn’t think Joe Rogan was speaking directly to me

I didn’t have dreams about him, either, as I had Letterman

(read: I didn’t think he was sexy)

(Letterman had been so sexy!)

He was just someone to listen to

Who had a sense of humor

I decided I should have been a comedian

So I could hang out with other comedians,

So everything would be funny (even the loss of civil liberties!)

Instead of self-accusatory and self-loathing and self-vilifying

I wondered if it were too late

To start a whole new career

If I started writing my set now

While locked down under quarantine

While locked out of my best friend’s house

eventually, as always happens, I had to stop walking (at some point)

I went back to my garage, took off my boots and winter jacket (it was snowing in april!)

I stood in front of my mirror

And preteen girls having posters of dolphins on their bedroom walls

surrounded by hearts and rainbows and smiley faces

becuz they didn’t know about the dolphins

But I knew, cuz I used to listen to NPR

And one morning a young female scientist had talked about dolphins

Kidnap her, swim her away from the group (pod?)

Even if she had a kid (name for dolphin infant?)

They’d just bring her kid along too

When they swam her away and raped her

This was something I’d learned on NPR

Back before I listened to Joe Rogan

I’d listened to scientists, then, too

Maybe I just really had a thing for scientists

I wondered if it were too late

To start a whole new career

But then I was always just a writer

Virus or no virus:

It was the one thing I was really good at

So maybe I could be a comedian, after all.

Started working on my life-as-an-asshole material.

I got so busy I forgot to wash my hands

Forgot to check how many deaths there’d been in my state in the past 24 hours.

I was going to be a comedian now

If only in my own house, in my basement

Like Robert De Niro’s character in The King of Comedy

I would interview scientists in my garage

I was going to have my own channel on YouTube

I was going to talk about how I was censored and blacklisted and a free thinker!

I had extended my dolphin-rapist bit by thirty seconds -

I was going to be so great.

Elizabeth Ellen and her dog got sprayed by a skunk at close range late last night (yes, while walking and listening to Joe-fucking-Rogan). Please take pity on her and buy her/ this poetry collection - Elizabeth Ellen - on sale now thru SF/LD Books. <3