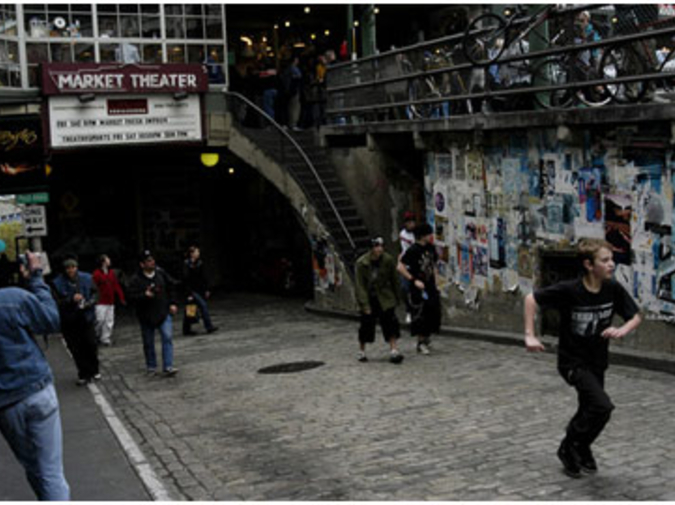 He could not look at the dog's eyes, light brown, like the sky before it started to rain. "Come on," Vassil said. The dog slowly followed him and climbed up on the backseat of the bone-shaker. Jivil was a peculiar mutt, yellowish-orange, like a crocus, but so feeble and aged that could hardy stand in front of his kennel. Jivil used to be a good guard of Vassil's house but there was no life in the old dog any more. When thieves once stole some instruments from the backyard, Vassil brought a new dog -- white with brown and black spots on his back. There were no crocuses and no rains in him; the newcomer had sharp teeth, malice and youth and no burglar could lift anything from the backyard.

Vassil's car was a ramshackle Ford, third or fourth hand. He hated it when his friends saw him drive it. He imagined he looked like the old Jivil, his fur thinning at the back, rains in eyes, death stalking behind the clouds.

Vassil was forty-seven when his wife gave birth to a third child, a boy, after his two daughters had grown and had children of their own. The boy, a dot of a child with red hair, was called Nikola after his mother Nika. While Nika did the housework, the boy and Jivil talked above the dog's empty bowl, a black eye, staring angrily at the sky.

The old Ford, which lacked any enthusiasm whatsoever, whirred and wheezed to the forest. Vassil knew he had to go a long way -- not only to the village of Bosnek, but much further, behind the springs of the Struma River, into the wilderness where even wolves would lose their way. The man and the Ford plodded on, the dog barked at the road from time to time. "Shut up, Jivil," Vassil muttered. Perhaps Jivil was deceiving himself that his master was again taking him hunting despite his scuffed coat where his fur had fallen off. The dog constantly raised his nose to the windshield.

Vassil had risen early in the morning on purpose so Nikola could not see him.

Nikola was a quiet comma which separated the days of Vassil's life and made his home complete and alive. Even Vassil's back that he had injured in Italy did not hurt so much when Nikola was around. There was no place in the world where his thought could go if Nikola was not there.

There were dozens and dozens of holes in front of his Ford. Not a road but a guillotine for the poor car -- which positively had driven more interesting folks in its heyday; Italians, and then some Turks from whom Vassil bought it. The guys just happened to pass through Pernik and were grateful they finally got rid of their rusty rattle-trap.

Vassil was a teacher in Bulgarian literature but there were not enough students in town, so he taught at the school for mentally retarded children. His students had difficulties remembering things. His wife was a teacher in physics, but there were no vacancies so she made tapestry cushions and prepared to go and work at a hotel in Greece. Vassil could not feed an old dog at home. He could not leave him to starve either and he had no bread for two dogs

The road before Vassil vanished altogether, then the track disappeared and only the hill was left.

"Come on," Vassil told the dog, but even before he had finished speaking, the orange pelt was jumping through the bushes. Vassil took out a plastic bag. There were bones and stale bread that he and his wife had been collecting for a week. Vassil had added a piece of cheap sausage. He had hidden it yesterday night from his dinner. He could do that much for Jivil.

He and his wife had carefully taken away the cubes of bacon from the sausage for Nikola. One never knew what sort of bacon they put in that cheap sausage. Vassil emptied the plastic bag with the bones and the shriveled piece of cheap sausage. The dog looked at him gratefully and bayed deeply, the way he did when Nikola took him for a walk to the hill. That hill was the end of the town of Pernik and the beginning of the disused colliery in which there were no coals. There were only rusty rails and old goods wagons in which snakes and spiders bred. The boy and the dog went about the deep ruts and Vassil was worried sick they could collapse in some old shaft.

"Eat this," he said to the dog. When Jivil licked his hand the man did not pat him on the head as usual. He withdrew guiltily, made for the car without turning back, started the engine and drove along the dirt road, through the holes, each one a grave for the ancient bone-shaker the Turks had gotten rid of.

The dog looked around confused, left the bones, and forgot even the shriveled piece of cheap sausage, which Vassil had kept for him from his dinner. His barking -- deep, long and loud -- mixed with the autumn leaves. Vassil could hear it, but didn't turn back for he didn't want to see the dog's back with the fur falling off, as orange as a crocus. He could not look at the eyes in which it constantly rained and death waited for the last autumn day.

The dog ran after the car. Finally he lost the game, yet made it to the asphalt road, crouched down beside it and set up a quiet deep-toned howl. Vassil drove quickly, as quickly as his old tub of a car could. He hated the rear view mirror although now it did not reflect the dog, but the roofs of the village of Bosnek. Vassil kept on seeing rain although it had stopped raining. It had stopped raining long ago. He parked his car in front of the school for mentally retarded children where the students studied very slowly. He was on duty during the night. He was in charge of all these kids, but he was not sure he could teach them any good at all.

In the afternoon he went home, to his house with which the town of Pernik ended and the empty colliery began. The railroad reached almost the door to his backyard and abruptly ended there. On the curb, in front of the house, Nikola -- the red-haired comma that separated into two all sentences in Vassil's heart -- waited. Although it was autumn, his son sat on the stone and played with the frayed leash on which they kept Jivil. The boy had put half a piece of the cheap sausage in the black dog's bowl -- an old piece of sausage, from which someone had carefully taken away all cubes of bacon. Nikola stood up from the curb -- a mite, a little round stone, hurled near the house.

"Where is the..." he began, but his father cut him short.

"Listen, I am in a hurry. I have to help your mother."

The red-haired boy bent his head, a reddish kite that had by chance tumbled in their backyard. He rolled the leash into a ball and thrust it under his shirt.

At noon the boy fell sick. His mother left the tapestry cushions she was weaving. His grandmother, a small woman who lived in the neighboring borough and smiled easily, came. She brought honey and dried linden blossoms to kill the high temperature. The boy didn't say anything, just listened to her, as quiet as a crocus in his bed in the kitchen where it as warm. He easily swallowed the pills his mother gave him. On the following day the rain stopped, the wind came from the empty colliery smelling of old wagons and spiders, the street behind the window was full of autumn. The boy was again running a temperature and the doctor made up his mind to put him on antibiotics.

Vassil came back from school. The children there, although they had difficulties remembering and studying things, had made greeting cards for their teacher's red-haired boy. There were smiling kids in these cards and a couple of scribbled words, "Get well, Nicko."

Nikola, too small for his heavy grand name, lay in his bed in the warm kitchen and spoke to the TV that was on, or perhaps he was talking in his sleep. Vassil brought him another dog -- a brownish-black thing that he kept on Jivil's leash. The boy tried hard to smile and gave up somewhere halfway through it. His mother sat by his side with a bottle of medicine and other pills.

It was cold and rainy, the red roofs of the houses thawed in the clouds, the wind hid somewhere and Vassil didn't know what else he could bring his son. It was quiet and gray and his boy probably lay in his bed in the kitchen. Vassil was walking slowly toward the end of Pernik, to the hill from which the autumn was to go away. It was impossibly quiet. The railroad of the colliery ended abruptly in this street, and his backyard began. If only Jivil could come back... but he had driven him far from here, too far. Even the Struma River was not there. There were no springs either, only wilderness. He'd do everything for his boy. There was nothing to be done. Vassil didn't feel like looking up. When he finally did, he couldn't believe his eyes.

Crouched by the curb, a boy and a dog sat side by side on the stone. Jivil and Nikola, both of them yellowish-red, the kid small, his hair very short, the dog's fur falling off from his back, two crocuses that had unexpectedly grown by the railroad of the colliery.

Zdravka Evtimova was born in Bulgaria.

In her native country, she has published several books of fiction.