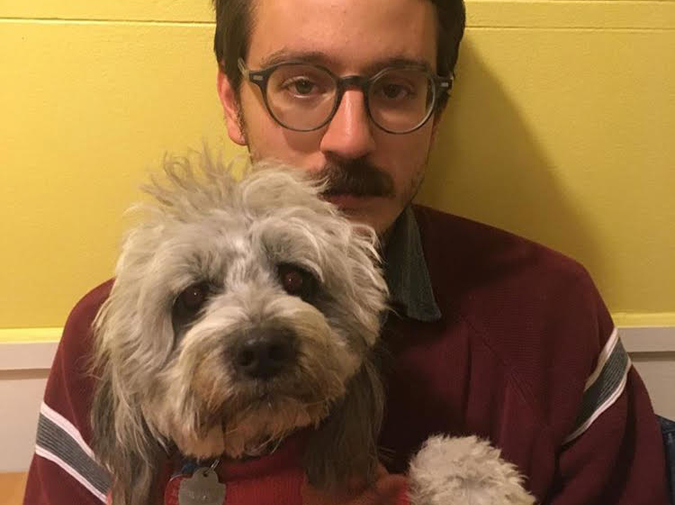 I was sitting on the floor yesterday in my parents’ house.

In a place called Dublin, California.

I was petting my dog.

And I thought about another dog.

“There have been others,” I said.

There was one in Beckley, West Virginia.

Her name was Jelly.

She was small, grey, and fluffy.

I lived with her owners, Scott and Julia, for a couple of months.

They were writers and college professors.

What we did was take Jelly for walks around the local track.

If Julia was busy teaching, Scott and I took Jelly.

If Scott was busy teaching, Julia and I took Jelly.

We walked around the entire track.

Sometimes we picked up Jelly’s poop.

Other times we were tired and we didn’t pick it up.

Scott told me once that he got in a fight with an old man at the track because the old man saw Scott leave Jelly’s poop on the track.

The old man told Scott to pick up the poop.

Scott told the old man to mind his own fucking business.

But they were walking in opposite directions around the track, so after about fifteen minutes they had to walk past each other again.

The old man grumbled but he didn’t have anything more to say.

And neither did Scott.

One time, on our way home from walking Jelly around the track, Julia and I drove by the community center and we saw a sign.

Julia said, “Do you want to stop in and check it out?”

I said, “Yeah. You never know what you might find at a book sale.”

Julia said, “It’ll probably just be a bunch of Dean Koontz books and some Bibles.”

A week prior, I had seen people from every walk of life commune in a Golden Corral.

It made more sense than church.

A woman with her throat cut open, some kind of plastic tubing inserted into a hole in her neck and wrapped around her collarbone, helping herself to pulled pork and corn.

She’d had a tracheotomy or something.

An obese teenager eating an ice cream sundae across from his emaciated father.

Smiling families and none of them looked alike.

Golden Corral was where everyone in the world was.

I was the only one.

And I was starting to remember that I was from California.

Julia pulled into the parking lot of the community center.

Jelly was in the backseat and she seemed excited.

“It’s just going to be a bunch of Dean Koontz books and some Bibles,” Julia said.

Jelly hopped from one side of the car to the other.

It seemed like Jelly was excited about the Dean Koontz books and Bibles.

Julia cracked the windows so that Jelly wouldn’t suffocate and die in the car.

We got out of the car and Julia locked the doors.

Jelly looked at us from the backseat window.

“We’ll be back in a minute, Jelly,” Julia said.

We walked into the community center.

We saw a piece of paper that said “Book Sale” on it, with an arrow pointing down the hall and to a small room.

An old lady was sitting outside the small room.

She was sitting on a tall chair.

She looked like an old baby in a highchair.

“Welcome,” she said. “Let me know if I can help you find anything.”

And we entered the room.

There were four or five long tables in the room.

Each table was covered in books.

And when I looked closely at the books, I saw that they were all Dean Koontz books, or they were all Bibles or books about getting closer to God.

“What did I tell you? Dean Koontz books and Bibles,” she said.

I kept looking at the books.

I looked at the books on the first table.

I picked one up.

On the back of the book was a picture of a smiling man with a mop of dark brown hair on his head.

This man was named Dean Koontz.

I picked up another book.

One Door Away From Heaven.

On the back of the book was the same smiling man with the same mop of dark brown hair on his head.

I walked further into the room.

I looked at the books on the third table.

I picked up a book.

And on the back was the same smiling man with the same mop of dark brown hair on his head, except that this man had his arm around a smiling golden retriever.

Julia was still standing at the first table.

She held up a Bible.

She put the Bible down on the table.

She held up another book.

It was another Dean Koontz novel.

“Maybe I should get this for Scott,” Julia said.

I walked to the back of the room and looked at the books on the last table.

I saw a book called Being Christian.

I saw another book called God and the Gay Christian.

And another one called Have You Truly Been Born Again of Water and the Spirit?

I dug around through some of the Bibles.

And then I found another book.

It was a book called Crapalachia and it was by a man named Scott McClanahan.

I put a Bible on top of the book called Crapalachia and I kept looking at the books on the last table.

I saw a book called I Want to Be a Christian Psychiatrist.

It was next to a book called the Bible.

I saw another book called Loving My (LGBT) Neighbor.

And next to that was another book.

It was almost falling off the table and it was under a book called When God Whispers Your Name.

The book underneath was bent and warped and some of the pages had dark coffee stains on them.

It was a book called Black Cloud by a woman named Juliet Escoria.

I looked over at Julia and she was buying the Dean Koontz book from the little old lady.

They were exchanging dollar bills.

“What?” Julia said, from across the room.

I walked back over to the third table.

And for five dollars I bought both of them from the old lady.

When we got back to the car, Jelly was hopping from one side of the backseat to the other.

She was alive and excited.

Julia unlocked the door and I got in the passenger side.

Julia got in the driver’s seat.

I put the Dean Koontz book and the Bible on the backseat next to Jelly.

I turned up the volume on the radio and we listened to NPR as we drove back to their house.

We saw a couple of people limping down the road.

I looked at the people.

We drove past a store called Artificial Limbs that sold artificial limbs.

I told Julia that before I left Beckley, I wanted her and Scott to take a picture of me in front of Artificial Limbs.

“You can just have the picture Scott took of my mom and me in front of the store,” she said, pulling into their driveway.

We both got out of the car.

I opened the back door of the car to let Jelly out.

She hopped out and ran past the yard, up the steps of the porch, and into the house.

Scott met us in the yard.

Julia said, “I got you something, Scott.”

He saw a book in Julia’s hands.

His face lit up and Julia handed him the book.

“The Husband by Dean Koontz,” Scott announced to the yard.

He pulled her in close for a kiss.

I reached into the car to get my books and when I did I noticed that they were wet and torn apart.

Jelly had eaten half of The Good Guy and at least a gospel of the Bible.

And the next day, on her walk, her poop was grey and dark black.