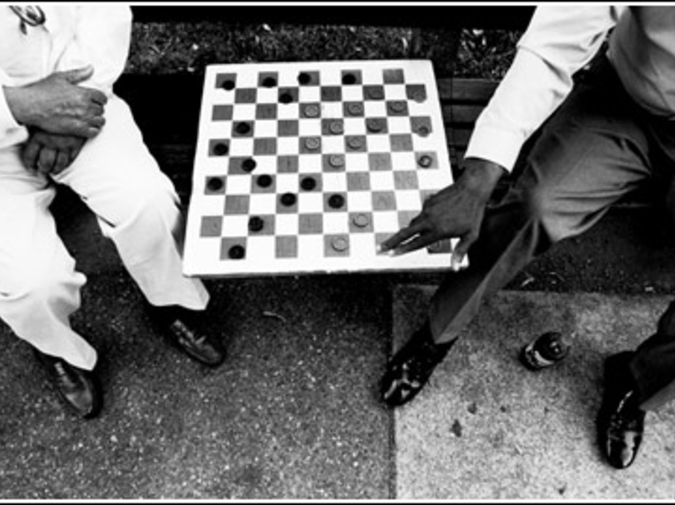 He sits in his chair, absently running his fingers through his thinning white hair. She hunches on the sofa, quivering, holding a shredded tissue in one hand and rubbing warmth into her forearm with the other. An afghan, knitted long ago by his wife, lies folded beside her. Low flames and dying embers in the fireplace barely dent the chill of the room, the smell of oak more evident than heat.

She wipes her teary cheeks. "Maybe you need someone else."

He stares at the tall, heavy clock that stands in the entry hall. Carved figures half-emerge from its mahogany frame. Each week, he cranks up its going and chime weights. Each morning, he checks its precision and listens to its heart: Tick-tock-Tick-tock...

The pendulum swings from side to side.

"You could hold me."

She begins to cry, again. "I don't even know what I did."

She wipes her eyes. "We need something that's ours."

Was that louder than the last?

He glances toward a window and the leafless trees beyond, etched black against the snowy landscape and gray overcast. On one of the misted panes a minute droplet suddenly grows and gives way to gravity. He follows its downward slide as it gathers size and speed until it disperses along the mullion. No, the mullion is the vertical thing. What's that horizontal thing called?

She wipes her nose. "We could try counseling."

"We could give it a second chance."

"We just go round and round."

"I'm sorry if I disappoint you."

The clock whirrs as it pulls its hammer back, then a release-click -- Bonngg! Another whirr-click-Bonngg! before resuming its dirge: Tick-tock...

Two o'clock. He pulls a watch from his pocket. "It's fast."

"The clock is running fast."

She looks at her useless tissue. "Can I fix you something to eat?"

He grimaces. God--women have so many weapons. "I'm not hungry."

"You should eat. You don't want your stomach to start up again."

"No." What did the guy say last night? "She looks young enough to be your daughter." Christ! She acts like my mother.

"I don't have to do anything."

"Please don't yell at me. I'm just trying to take care of you."

"Jesus!" He rises and walks past her.

He stops at the clock and moves the minute hand back a bit then goes out the front door, slamming it behind him.

His breath fogs the air as he marches from the house toward the road thirty yards away. The snow crunches beneath his feet, the cold penetrating his leathered soles. At the road, he stops. No one in sight--deserted. His face is stiff. He blows on his hands and stamps his feet. He shivers and his nose begins to run. Stretching his upper lip down, he sniffs back the mucus, and then stands still, half-frozen.Thump-thump-Thump-thump...

To his right, the town is too far.

To his left, the cemetery is too near.

It's cold as hell.

The old man takes the watch from his pocket and follows the jerking tick of the second hand. It's about time. Another minute, or so... We'll start our day over again.

Martin Dodd joined a writers group at age 67 in 2002. Since then, he has been published in The Barmaid, The Bean Counter, and The Bungee Jumper; Chicken Soup For The Recovering Soul; Homestead Review, Hobart (Dec '06), Cadillac Cicatrix, and Writers Weekly. He has also won awards, or been a finalist, in contests of Writer's Digest, Inkwell, and Glimmer Train. Martin can be reached at gopumps@aol.com (but hurry, at his age he doesn't buy green bananas).