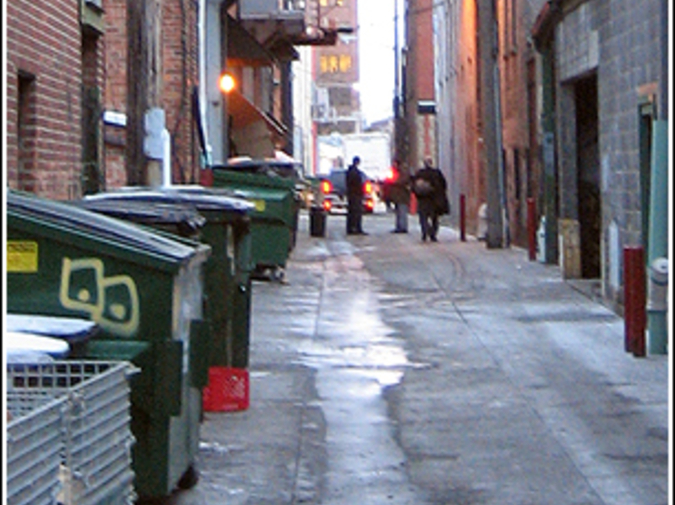 In less than an hour, the ferry was at half-speed, the wind had died and the magnificent flora of Cane Island was in full view. They were in the brochure again, the one the travel agent had given them: Lush, tall trees, a great belt of them bent by the trade winds into an arched solid shape, a kind of terrestrial tidal wave challenging the sea. Ray watched as Maddie shouted, "Hallelujah!" She said she couldn't hit the spa fast enough.

They unpacked and she was off for a seaweed wrap — and, by default, Ray was off too, walking for no other reason than to walk. He told himself he was headed for the bar, any bar. Resorts like this had them inside and outside, anywhere and everywhere. But where he found himself, once he'd turned a corner or two, was nothing like a bar. He was at a place that lacked congeniality of any kind. It was one of those border points where the manicured resort property — the mowed grass and the procession of specimen plants — came to a dead stop and changed into something not for the eyes of guests: a parched patch of limbo that looked hacked and burned and abandoned. Judging by its size, it could have been a field for croquet or badminton at one time, but now it contained four Cane Palace dumpsters, big as army tanks, and their unpleasant overflow. At the sight of them Ray automatically turned away, but a flash of turquoise water to the right of the farthest dumpster gave him a different option — a path that ran to the side of the dumpsters rather than towards them and beyond — and when he had taken it he found himself looking out on a little empty cove, shimmering like a sapphire. It was bordered by a wall of forest so thick the bunched green shapes were almost black — as though pressure from the jammed trees had squeezed the shadows in the forest until they poured out, the way ink might seep from a monster squid.

Ray stopped, looked and listened, and was about to head towards the cove, but aÂ disturbance in the mass of branches and vines stopped him in his tracks — and out of the forest burst an island man riding a horse with no saddle. Both the man and the horse had a feral, starved look, ribs as prominent as sticks, the man nearly as naked as the horse. Ray crouched and watched as the man dismounted, led the horse into the waves and carefully splashed sea water all over the animal. He spent a long time at it, the water up to his waist, as though he were dousing a fever. Then the man re-mounted, and he and the horse rose out of the water like a ravenous centaur. They vanished at full gallop into the forest, and Ray, nerves pounding, made his way back to the barren field. The moment he reached the paved pathways — there were several of them joined in a circle — he was startled by an engine sound. It was a luggage cart about to cross in front of him, driven by a resort worker, an island man in crisp white shirt and shorts. The man stopped the cart abruptly. "Ride, sir?" Ray hesitated but finally climbed in, simply because it felt easier to say yes than no. "Where are you headed, sir?" the driver asked, speaking politely, but staring in a way that was too cold for what the voice was offering. Ray stammered his request: the beach-side bar, and the island man gunned the cart. But the path he swerved into wasn't the path Ray expected. In fact, it appeared to go in the exact opposite direction, back towards the cove, and for a brief time they plunged into forest so dense Ray saw nothing but jungle, yellow-green walls, and he found himself thinking of locked places: bunkers and vaults.

Just as Ray was one blink away from jumping out of the cart, they emerged from the jungle and re-entered the streaming light. And it was as though a dungeon had crumbled and disappeared. The walls of wilderness gave way to Asian gardens and statuary. They went over a rise and the beach-side bar appeared. As they sped toward it, Ray fumbled in his pocket for bills...

That night he and Maddie shared an exquisite dinner, food so carefully raised and prepared even the mince of chicken could be eaten raw. They were in the brochure again, the storied and much photographed dining room, with its paddle fans and fantastically carved ceilings from the old plantation days. Â But in his mind, Ray stayed in replay mode, his thoughts a running spool in which he was forever pulling out bills and handing them to the luggage cart driver. When he tried to break this loop all he could do was switch tracks and go back to the cove and the wild-looking man and the horse. As he sipped the wine — they'd ordered so pricey a Burgundy it was decanted by a candle-holding sommelier — he obsessed over the forest rimming the cove: whether it was home to other desperate men and their fevered, starving horses, andÂ even whether the man on the horse and the man on the cart were connected in some way. It worried him that he could not, for the life of him, think of the bills he'd handed the driver as just a tip.

Instead he saw it as ransom, and this thought alone robbed him of sleep, even though he kept drinking on the bedroom balcony long after Maddie had nodded off. Even though he threw down a double Ambien.

Just as the night sky faded from black to grey, Ray finally fell into a brief swirl of half-sleep, a delirious place where he was back staring up at the dumpsters and then pushing himself to go right past them, straight into the forest. He stepped over a swarm of roots and found himself face to face with a huge snake, hooded like a cobra, except the cobra face was gone. In its place was the head of a starving dog, fur withering and raw bone showing through the patches; fangs bared and foaming, eyes that were blood red yet bluish cold.

In the morning, croissants were brought by a man who could have been the same man who had driven the luggage cart. He set out the linen and silver with a flourish. Yet there was something Ray saw in the eyes: a chilled look that seared, somehow defying and denying every act of hospitality the man performed. He had seen this in the eyes of the cart man, a knife-cold flash, and now Ray knew it had been in the eyes of the cobra-dog and the man with the horse as well.

He choked his way through the croissants and busied himself until Maddie took off — for a morning of yoga. Then he turned to the only task that seemed to matter: finding peace on Cane Island, peace for which he was prepared to pay a bigger price than the fat sum he had handed the travel agent. What that entailed was still uncertain, yet one aspect of it was ridiculously clear. He would have to forget golf and dining and basking and everything else the brochure had touted as the essence of a Cane Island experience. In the brochure these things had been trumpeted in bold type, even heralded with a title splashed across the cover: The Great Cane Island Escape.

But now Ray had his own idea of escape, and there were no options, no other possibilities. Escape meant he would have to go off to the dumpsters again, go to them and go beyond them. He dressed quickly, without brushing his teeth or shaving. Before he closed the door behind him he seized the brochure and tore it to pieces. There were no dumpsters in the brochure.

Paul Silverman's stories have appeared in The South Dakota Review, Tampa Review, Eureka Literary Magazine, Minnetonka Review, Hobart Online, Pindeldyboz, Word Riot, Thieves Jargon, Alimentum, Smokelong Quarterly, The Pedestal Magazine, The Jabberwock Review, The Adirondack Review, Dogmatika, The Summerset Review, VerbSap and many others. He's been a Spotlight Author in Eclectica, which nominated his story, "The Home Front," for Best of the Net, 2008. His work is on the 2006 and 2008 Million Writers Award shortlist of Notable Online Stories. He has three Pushcart nominations for stories in Byline, Lily and The Worcester Review.