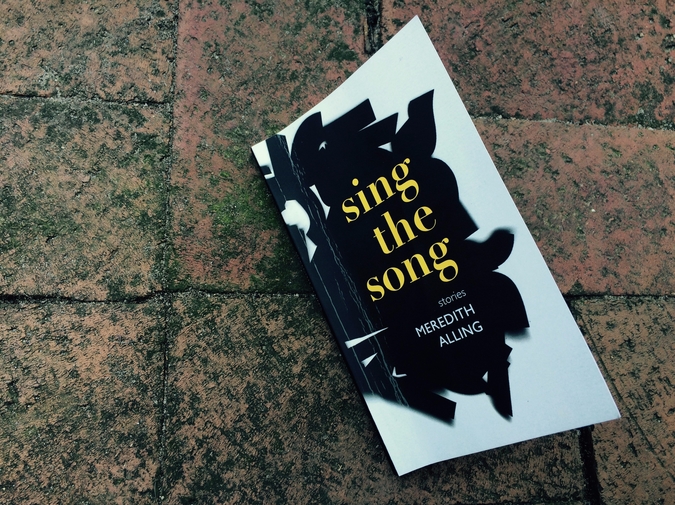 “Some babies drink soda the second they are born,” writes Meredith Alling in “Other Babies,” the opening story of her debut collection. “They glug it down. The sugar courses through their body. You can see the brown humming through their spider web skin. It shoots through the brain, the hub. It clocks in at five past and gets to work.”

In that story, Alling describes a lot of other so-called babies, too, including even stranger ones, like “vibrating piglet” babies. I can’t introduce her fiction any better than that, although there's a lot more to it. There is wise humor, but also a level of depth that causes you to suspect she is a writer who will continue to be a relevant and interesting for years to come.

SING THE SONG, published by Portland’s Future Tense Books, is gripping and palpable, and is easily enjoyed in only one or two sitting. Many of the stories are in the two-to-three page range and vibrate just like “Other Babies.” Others are slightly longer and feature more complex narratives. Like the best collections composed of shorter stories — Amelia Gray's Gutshot or J. Robert Lennon's Pieces for the Left Hand — much of the tension comes from reading the pieces side by side, allowing meanings to jostle and accumulate. Alling was kind enough to answer some of my questions about writing, the Los Angeles literary scene, and weird name coincidence.

How did this collection come about? Most of the stories are on the shorter side of the short story spectrum. Did that make it harder when putting stories together in book form? And how do the pieces connect in your mind? Is it mostly by subject matter, like investigating mortality and beauty?

Kevin Sampsell of Future Tense Books had read some of my work and after meeting him in Portland, he asked if I’d send him a selection of stories to see if there was anything we could do together. Kevin liked what I sent so we decided to do a full-length collection that would include the stories I sent him along with new ones that I would write. The fact that there are so many stories—because many are very short—definitely made it more challenging in terms of figuring out the best way to organize the book, but I’m really happy with how it turned out.

As far as the stories connecting, I would say that they don’t in any overt way, though many share the same themes and language and world.

You mentioned working with Kevin Sampsell on the collection. Since you must have worked with a variety of editors publishing several of the individual pieces with literary journals before the book was picked up for publication, how was it working with one person who could finally look at the book as a whole? Did some of the previously-published stories change? Did any of the pieces in the collection change during the editing process in ways that surprised you?

One of the reasons I was excited about working with Kevin is that he has great taste, and so when it came to looking at the book as a whole, I really trusted him. Some of the previously-published stories did change, but not in any way that was hugely surprising. He and Bianca Flores, who is Future Tense's editor/publicist, had a lot of good suggestions for how to push certain stories further. For example, they both loved the character Grandma Chet in “Hot House,” so I ended up re-working the story to make her a more central character. Kevin also had great notes about adding sensory details to stories, like “what did it smell like?”

A lot of the pieces in your book are first person. Do you get questions about whether they’re inspired from your own life? If so, do you think that’s more usually the case with shorter prose or poetry when pieces can be arranged around images and/or metaphors? There seems to be a lot of fiction in general these days that plays with readers’ assumptions of author vs. speaker. I try to be conscious of the speaker distinction as a reader, but I’ve wondered about how readers would perceive my own in-progress work in that way sometimes.

All writers of fiction face these types of questions whether they are writing in first, second, or third — short or long. I think it’s just assumed that personal experience must play into what we’re writing, and it’s often (but not always) true. That said, I haven’t really had anyone ask me about this, now that I think about it. And really, I don’t care if one person reads it all as straight fiction and another person assumes I’m the speaker in the first person stories. That’s something I’ve learned to let go of — I can’t control how anyone interprets what I’m doing.

Could you explain the story “Ancient Ham” a little bit? I think what I like most about it is how the reader is not only observing the weird ham (pig meat or human blob or whatever) but they experience it with other senses, poking the ham, touching ham juice, etc., and how the whole thing seems to work to shed so much light on humanity’s desperation.

Yeah, it’s a disgusting story in a lot of ways, and yes on humanity’s desperation. And there’s a worship element there. Despite the fact that this ham is secreting foul juices, people are eager to get a taste. They are also putting a lot of stock in this sickening ham’s answers — it’s a high-stakes situation. What I like most about the story is that the grossness makes way for the sadness.

This is going to be a little bit of a strange question, I guess, but a couple of my favorite story collections I’ve come across recently have been yours and The Great American Songbook by Sam Allingham. I told a friend this and he pointed out that it was weird that the names Alling and Allingham were so similar. And then I realized that my favorite story in the Alling collection is about a ham? Thoughts?

Whoa dude way to blow my mind. What about the fact that his title has the word “song” in it and so does mine? Time to call my pastor.

You’ve mentioned that although the collection was written in Los Angeles, there aren’t really any explicitly “LA” stories aside from “Sample Sale”. (I love that one by the way). I don’t really know LA. What’s the literary scene like there compared to other places you’ve maybe been?

I don’t have much to compare it to since I haven’t been a part of any other literary scenes (other than when visiting places). But I’ll say that it’s a friendly scene and people are really supportive of each other. And despite being a big place, I’ve found that it's been easy to get to know people here, and I’ve made some great friends through going to readings. One of favorite parts of the LA scene is J. Ryan Stradal's laugh.

What are some books you’ve been enjoying lately, either because they’re influencing your writing or because you just like them a lot?

I’m currently reading What Belongs to You by Garth Greenwell and Satan Says by Sharon Olds. I’m just getting onto the Greenwell, but so far it’s worth the hype. And Satan Says, I’ve been meaning to buy it ever since Wendy C. Ortiz performed Rhapsodomancy on me at Henry Hoke's book launch and chose an Olds poem from the book that was too perfect. And Sharon Olds is so good, of course: “My da on his elegant vegetarian ankles drank his supper.”

What kind of work are you doing now? Have you written a novel or thought about writing one, or done work in other genres? I enjoyed the humor a lot in SING THE SONG. Are there different challenges with humor and just writing in general for you with longer vs. shorter work?

I've been working on some poetry but I can’t tell if it’s any good yet. I’ve also started working on a novel, but slowly. I don’t think there are challenges for me with humor in longer vs. shorter work, but the reality is that I’ve never tried to write something novel-length, so of course that comes with all kinds of challenges, like patience and continuing to give a shit.

What would your advice be to beginning writers just starting to hone their craft and getting ready to send out work?

I would say slow down, take your time. When I first became aware of the possibility of getting published in literary journals, I sent out all kinds of bad work that wasn’t ready to see the light of day. Fortunately most of this work was rejected. I think submitting can be addicting, at least at first, and it can eclipse what you’re ultimately trying to do (write). I submit so much less today. I have nothing out right now, actually. I’d also say read a lot, and read all kinds of stuff. It’s the best way to find out what you like and don’t like, and that can help shape your writing. Also, don’t take everything so seriously, and be nice to other people, and to yourself.

Gregory Lee Sullivan’s writing appears in The Washington Post, The Guardian, VICE, The Nervous Breakdown, and other places. Before completing an MFA in Fiction from Rutgers University, he worked as a newspaper reporter and editor in Georgia and Tennessee. Links to his writing may be found at gregoryleesullivan.com.