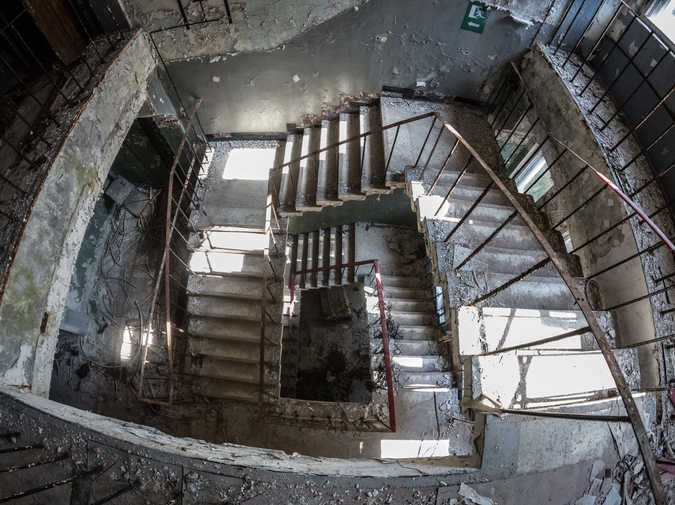 Z doesn’t remember because—despite a terrific memory—she never remembers her profundities. The bus ride was otherwise very memorable, our first from Islamabad to Lahore as people who had just lost their virginity. She doesn’t remember saying it because she said it nonchalantly, an aside in the midst of heady chatter about new sex. Somehow, I had found someone in college, and as it turned out, I wasn’t scared about people seeing me. On the contrary: I wanted people to see my spectacle. I wanted them to never forget it. We yakked on for hours, giddily, making sure to cover every detail. But at some point during the bus ride, Z had wondered aloud: what if the joy of experiment dies with joy itself?

Two buildings were under construction that winter. The first was the School of Science and Engineering building, of which only half the interior was complete and almost none of the exterior. The second was the sixth addition to the male dormitories. That was where I took him. He was a senior, and I was a sophomore; he was one of the most beautiful boys on campus, and I was—oh, I don’t know what I was; mostly I was nerdy, I had a lot of friends, but most people seemed to worry about me. I befriended them all.

He didn’t need anyone. He was the first out boy on campus, it felt like everybody was secretly in love with him. I felt like I’d pulled off a bank heist—mischievous, on the precarious railings of a half-built staircase, where I demanded him, and put things in places so fast that I have no recollection of ever actually taking off any clothing. We did, of course, amongst the dust and rubble and cement-gray pillars. He would always wind up naked first, and he laughed and blushed and chastised me. Once, a railing almost tore straight off; I leaned against it hard, blood draining from me to him. He didn’t let me try again in the same place, but I insisted on other railings and staircases; taunting him, daring him, staring into him as if into a crevasse because all lines were becoming softer and my over-guarded interior, the island of my singularity that until now had brought nothing but pain, had begun to disperse and run ahead of me, like the suggestion of euphoria rushing ahead of this sentence.

We fucked in every empty auditorium on campus. When we had sex on the roof of the School of Science and Engineering for the first time, I looked out from the roof of the tallest building for miles in all directions. I ripped his shirt open because I knew instinctively who this boy was in ways no one else did, and I wanted this mean, wretched city to witness me admitting him. There was no queasy shivering, just the rub of me against him. I would hold up this thing to everyone who had ever known me or would ever know me—myself, this verboten, splintered boy who would, first, exhibit his carnality on the hard edges of a steel cable and drop you down the elevator shaft, or throw you over the roof, and his belly would fill with nasty delight. At the first, my sexuality proclaimed itself sneeringly, asking: would you dare fuck with me now?

Who knew I had it in me? I barely met my friends anymore. One of my closest friends told me she missed me, that she felt I had stopped being friends with her. I told her there just weren’t enough hours in the day. Mostly everybody was happy for me, but a little shocked too. I had always been outspoken and bold, but also too tightly-wound to be so reckless. He, too, was a bit busy being shocked. It all went pretty thunderously—my demand of public sex, and an unprecedented level of acceptance in college. Love was mentioned a few months in and then it was all we ever talked about. In the meantime, he blew me at the back of a packed bus. We had sex in a room filled with friends pretending to be sleeping. A stranger approached us in my car— parked next to a tree opposite a happy trail of houses—as my hands massaged his bare groin. The stranger told us to leave, or wait for the police. I rolled down my window, and laughed in his face. Before I graduated, a security guard told me he used to stand vigil outside one of our regular spots, because I was kind to him, and he was scared for me. Kind? Scared?

Chicago and New York, post-college, felt like so much freedom—too much. So I had no use for all that monstrous longing. I’ve never loved anyone as much as I loved him when the longing settled down. The day I asked him to marry me—a choice Z didn’t approve of: it’s a rash declaration of love he doesn’t deserve, she said—we fucked in his room because he wanted to. I acquiesced, and worried; we were one closed door away from his parents. Months later, I was paying a deposit for a wedding reception at the Lincoln Park Conservatory, and then: in the blink of an eye, the spectacle that had lasted for the better part of a decade evaporated. He drew an eraser over it all. It was gone in a split-second, but for years every morning, I woke up and remembered, as if for the first time. Z didn’t have to say ‘I told you so’. I knew she had hoped she was wrong. Where there was once a vast amphitheater I had opened to the world as a means of power over it, there was only me, trying desperately to keep a peephole from shutting.

Two years later, another boy kissed me unexpectedly outside the Lincoln Park Conservatory. I liked him, but wouldn’t allow it. I saw that beautiful, tenuous salivary thread that connects parting lips and pulled away, from all boys. When it was all gone what was left behind were the entrails of everything that had ever comprised my longing. The suggestion of all that nothing, in perpetuity, rushing ahead of this sentence.

Kamil Ahsan is a biologist and historian with a doctorate from the University of Chicago. Originally from Lahore, Pakistan, he is also a journalist, writer, critic, and Reviews Editor at Barrelhouse. His work has appeared in The Rumpus, LARB, The Nation, The Masters Review, The Millions, and A.V. Club among others.