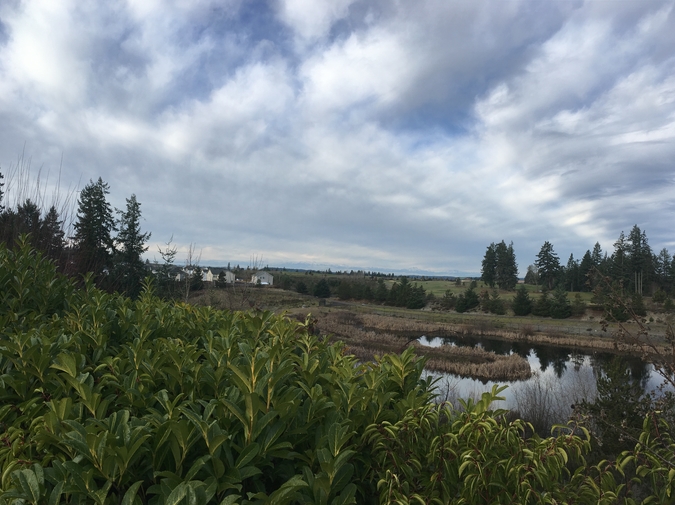 It was sometime in the nineteen seventies that I watched you from my window seat, hustling along the platform, your red hair and green corduroy jacket a bit of bright in the dull grey light swirling from the glazed roof of Paddington Station. When you boarded a car two down from mine, I exhaled with relief. My compartment—bench seats upholstered in a nubby maroon material, racks for the ubiquitous umbrella—was still mine and mine alone. To the lurch of the train and the accompaniment of grinding wheels, I returned to my monologue, muttering for the umpteenth time, “You have ungently, Brutus, stole from my bed…”

But then I saw your reflection—ginger-bearded, robust, Henry VIII in his slimmer period—peering in at me from the corridor. I was twenty. You were middle-aged. Pervert, I thought, and stiffened my back, willing you away. But it was no damn good, in you came, sliding back the ­­­­­sliding door and settling into the opposite corner, tossing your umbrella onto the seat, unbuttoning your jacket, as though you were royalty. I wanted to flee, but years of politeness training stood in my way.

The station slid past and into a skein of railway tracks and sheds, then the backs of businesses and industrial buildings, drab residential houses with little gardens and an unlucky shirt or two flapping on a clothes line in the cold air. Conscious of your eyes on me, but unwilling to let you derail my mission, I whispered to myself, “You’ve ungently, Brutus…”

As we passed below a series of trestle bridges, I heard your mellifluous voice say, “Where are you taking your Portia?”

Your sharp blue eyes and large-lipped smile were waiting for me when I turned.

This statement gave you credibility, and I found myself telling you how I’d scheduled an audition for the Old Vic Theatre School in Bristol, flown standby from New York, overslept today—the day of the audition—until I was waked by my British grandmother and frantic Great Aunt, who rushed me from their semi-detached house in Kent and onto a commuter train to London, where I changed to the tube and ran to watch my train pull out of Paddington. So here I was, on a later one, likely to be late.

Your answer, uttered as you stroked your ginger beard, near orange against the red of the cushion: “I’m a RADA man myself.”

The Royal Academy of Dramatic Arts is and was hugely prestigious. I hadn’t even tried for an audition there. You moved to the seat directly opposite, beside the window. I didn’t mind; you went to RADA. I was enthralled with your stories about the places you played—London, the provinces, and most especially Stratford, the Royal Shakespeare Company. Oh, what I would have given to work there. You did film and television as well and had exactly the sort of career I wanted. But when you said your name, which I’m sorry to say I’ve long forgotten, I had to shake my head.

Your thick eyebrows did a solid lift. “I’m quite well known here.”

Now outside the window, the English countryside fairly galloped by—fields enclosed by ancient hedges still wearing their winter brown, then, shockingly, a field of bright green with sheep grazing, roan horses, stone churches in the distance, all so lovely despite the March grey. I knew I could happily live there. An anglophile, everything British called to me.

You, accustomed to the beauties of your countryside, were in the midst of an anecdote about your agent getting a call from a producer who wanted someone for a role who was like you, but not actually you. I only half-listened. Worry moths were feeding on my gut. I needed to get back to my speech.

Aware you were losing your audience, you leaned forward. “Why don’t you ring the school and ask for a later time. You’ve come all this way. Why let yourself be rushed?”

I stared glumly back at you. Could I request another time? It seemed bold, and unless I’d drunk a lot of alcohol, at twenty I never felt bold. Also, my uncle was picking me up afterwards, driving me to his house in Salisbury. With my cousins. And there was a dinner involved. I’d inconvenience everyone.

And then you said in a gentle voice, “Why don’t you come back with me. I have a house in Bristol. I’ll coach you.”

Your eyes were a warm blue, not a cold one. There was nothing predatory in your gaze. But I heard a clanging in my ears, and my teeth wanted to clench. I was impressed by you, but wasn’t that your intention? Me, a college girl in purple suede, you, a man of—forty? An old story. I cited my obligations.

Beside you on the platform, we were the same height—you’d seemed much taller, altogether bigger on the train—the look in your eyes was bemused. You asked again. I smiled and ran for the taxi, not looking back.

In the cab, I experienced a twinge of doubt.

For you were right of course. I should have called the school, delayed my audition, had a cup of tea and calmed myself. Instead, I raced into a bare little room, full of apologies, prostrated myself on the floor and rushed my speech. The auditioner was kind and the school sent me a letter when I was back in the US, saying I’d been put on the waiting list. Out of pity, I imagined.

And if I had gone home with you that day? Did you plan to attack me the moment the door shut behind us, knowing the silly ingenue would be too embarrassed to report you? Or would you have waited till after that cup of tea or glass of wine? Would you have made a smoother move? Or could something altogether different have happened, you helping me with my speech and sending me toward a glittering future on the London stage? What was in your mind, dear actor quite well known in England, when you invited me home that day after the train stopped at the alluring city of Bath and had crossed the river Avon, houses becoming more frequent along the tracks, along with goods yards and railway sheds as we approached Temple Meade, in Bristol.

Mary Portser lives in Venice, California. As a playwright, she has won the Otis Guernsey “New Voices in the American Theater Award” and has had plays produced in Dublin, Los Angeles, Toronto, and New York. She is also an actress, working in theater and television and showing up in such movies as Passion Fish, True Love, The Italian Job, and Human Nature, as well as the HBO series True Blood. Excerpts from her first novel, Squawk, can be read in the online journals Embark and Bartleby Snopes, and her short story “The Surgeon” appears in Nightscript V.