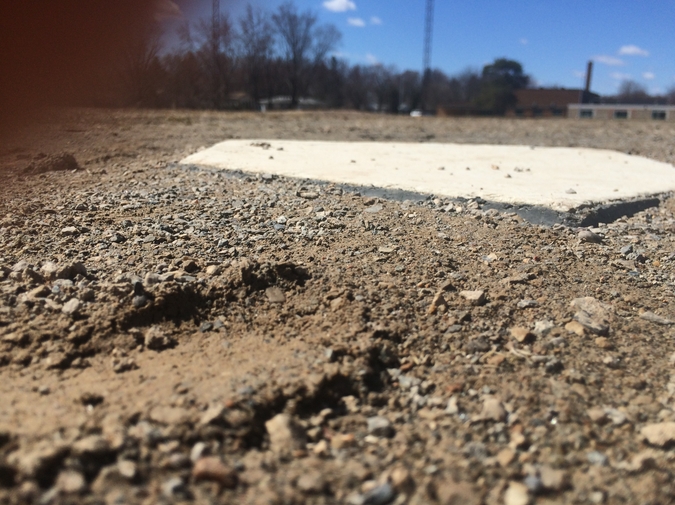 When the time came for its demolition, there was no implosion at Shea Stadium.

There were no wrecking balls, no dynamite, no chants of ten, nine, eight and so on from huddled fans and onlookers. A New York City ordinance prohibits implosions within city limits, so Shea’s demolition required a more painstaking approach. This proved no problem, for the most part: the Mets know how to stage a collapse.

The stadiums that did implode (Veterans in Philadelphia, Three Rivers in Pittsburgh, Riverfront in Cincinnati) were built, like Shea, during the 60s architectural mania for coliseums. These were weighty utilitarian things, eyesores as mammoth as megachurches. An implosion is a marvel of synchronicity, an orbiting centripetal collapse, the catharsis a child of twelve, say, dreams of wrecking on his room after another senseless late-season loss to the Braves.

Even those who loved Shea wouldn’t call it pretty. The upper deck rose so steeply there should have been seatbelts to strap you in. The stands shook slightly from the planes passing overhead, taking off from La Guardia, the roar of engines so entirely and regularly washing over the field that a visiting pitcher would step off the rubber and a seasoned ticket holder could tell you which plane was which without looking up. Most garish of all, Shea’s seats ran around the stadium in concentric color coded rings, like the donut the on-deck batter drops round his bat for extra heft as he times his swing to the pitcher’s wind-up—first dropping and then notching his elbows back to lumber the 32 ounces of maple through the zone—so that when pitch has already snapped its report in the catcher’s mitt, strike or ball, in play or foul, the man on deck is still following through with his swing, the barrel level, his eyes down. The whole process seems to operate under a different sense of time, as serene and slow as if underwater.

The implosions at Veterans, Riverfront, and Three Rivers were like that: slowed down into grace. The dynamite carved the stadiums into sections and each crumbled inwards as soft as wedding cake. In less than a minute, the whole stadium fell to its knees like sajdah at a mosque. The dust above Veterans Stadium, the evening news reported, hung there all afternoon. It baptized the new ballpark and only by evening slogged its way into New Jersey.

Through this all, the fans cheered. The whoos, the yeahhhhs, the steady claps like the thrum of a car down the highway. What were they cheering exactly? If the stadium is old and the team miserable, then it’s a razing of ghosts and bad spirits. A last cheer for the memories, now more hallowed in the site’s destruction. Or the promise of the new stadium next door, raised up on an old parking lot, a monument built out of city tax dollars and corporate sponsorship.

Or do they cheer something more innate? To implode is to collapse violently inward. Its component parts: in, within, and plodere, to clap. To implode is to burst inward with noise. We applaud to show our appreciation that something has appeared true to life, that we see our own form in the figures on the stage. We applaud perhaps because we too fall in on ourselves; we too will collapse.

Shea, though, was dismantled. A few weeks after the season ended, its demolition crew drove their Bobcats to the middle of the field. They swept up the peanut shells, blowtorched steel, and bulldozed the grass. They took down the scoreboard, then the bleachers, the batter’s eye, the bullpen. By mid-December, the loge and mezzanine sections were rubble. By the new year, only the upper deck remained. And then that was stripped section by section until the steel framework hung in the air. On January 31st, fans came to take a final tour. On February 18th, the last section of ramps was removed and all signs vanished. Shea Stadium became a parking lot, its remnants relics. The foul poles, the bricks and railings, the letters that spelled S-H-E-A on stadium’s facade. Pairs of seats were sold for $869 a pop. Like fans after a game, Shea dispersed and disbanded, absorbed back into the folds of the city, into its private apartments and glass-cased memories.

And there were moments, after all, when Shea was beautiful. Moments when the stadium’s lights turned on and the day imperceptibly darkened into night, as if the electricity summoned sunset and not the other way around. Those moments when a gaze from the left field’s upper deck would land on the far-off mass of fans in right (the stragglers leaning against the railings and watching gratis from the subway platform) and the fragmentary would become whole, a collective pulse riding the fever pitch of Benitez or Franco, Wagner or Orosco. A rumble would belly up from some unknown part of the stadium then, louder than any plane, and Shea’s foundations would rock and creak, everyone standing up and shouting and willing it to shake even harder. Those moments when it felt as if no demolition team would ever be needed, as if we could deny city ordinance and bring down the whole stadium ourselves, those moments when we realized that this was why we clapped, why we imploded, even if our power was just the combination of shoddy architecture and the building feeling of salvation that never really came.

Thomas Mira y Lopez holds an MFA in Creative Nonfiction from the University of Arizona. His essays appear in The Pinch, PANK, CutBank, Green Briar Review and elsewhere. He writes and teaches in Athens, Ohio.