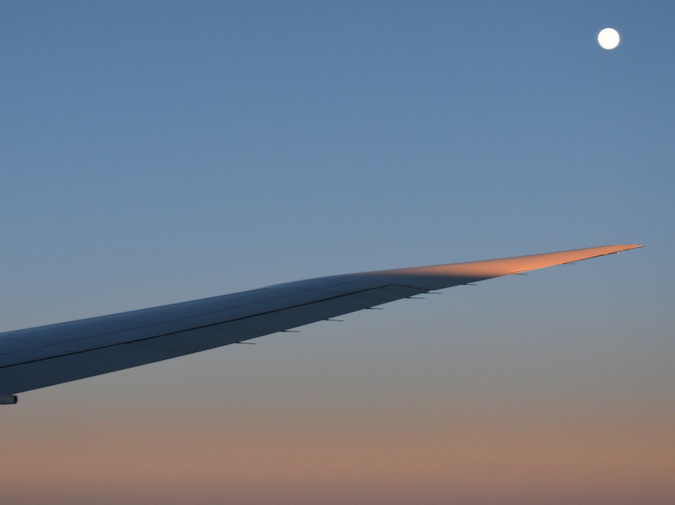 On planes she thinks about crashing. Especially when the clouds are pressing in on all sides and the hollow machine heaves and drops, leaving them weightless for long moments before scooping them up again. The passengers in the seats around her don’t make eye contact, just grip their armrests and keep their eyes fastened ahead, but she humors herself that they’re in this together. Below them, out of sight, the wide Atlantic stretches like some pilled length of fabric, and she knows these are the people she will die with, that they will crash-land too far from anything, float off on the neon rafts in their stupid life jackets that no one remembers how to inflate, make landfall by accident in the middle of the night on a lifeless sandy knoll that is barely large enough to fit all 200 of them, if all 200 of them even make it. She’s heard of planes going missing over the ocean, sinking too quickly for the search parties to locate, endless circles of radar and satellite, and who could find them, shoulder to shoulder on some miraculous spit of land, staring up at the sky, the children whining and chattering until finally they quieted of their own accord and ceased speaking completely. Across the vacant middle seat an old man is sleeping through all of this, chin to collarbone, neck bent at a right angle. She watches him, worried that his neck will snap from the turbulence, or at the very least have an awful crick when he wakes up, which doesn’t make it any easier to follow the emergency protocol, to put the mask on, to run to the exit row. Maybe he is too old to run, maybe the terror would stop his heart before they’ve even touched down, and she’d be the last to see him, the last to touch his body, climbing over his knees to get into the aisle, pausing for the briefest allowable moment to say she was sorry, to lay her hand on his head and pray that his memory be a blessing. But then she would have to keep moving, keep following all the others, and she would stand in the open door with rain spitting into her face, look out at the place the horizon should be if only she could find it in all that gray, hold her breath, and fall forward into whatever might briefly catch her.

Sionnain Buckley is a writer and visual artist based in Boston. Her work has appeared in Winter Tangerine, Wigleaf, Strange Horizons, CutBank, New South, and others. Her flash fiction has been nominated for Best of the Net and Best Small Fictions, and was a finalist for the Anton Chekhov Award for Very Short Fiction. She is a 2019 Rhinebeck Resident with The Seventh Wave, and serves as Art Editor for 3Elements Review. More of her work can be found at sionnainbuckley.com.