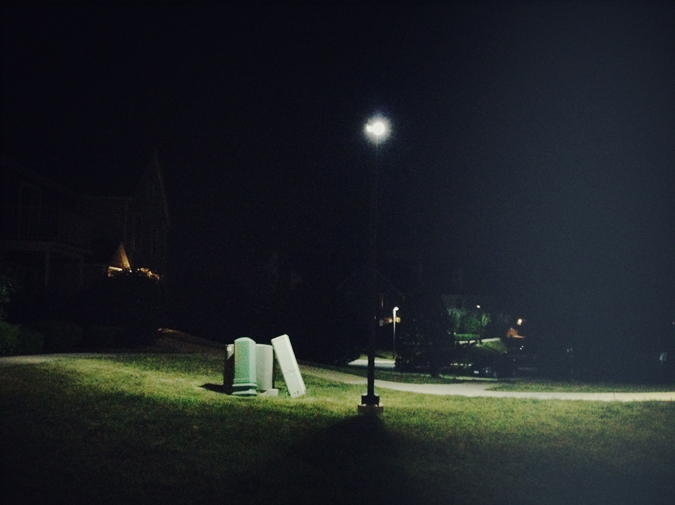 The night needed a push. I was the only customer in the place, this small dark place called Barely Legal with just one stage and a handful of circle tables and red candles. I’d run out of money after getting a few drinks in me. It was a bad feeling, like finding a straight piece of blacktop under a noon sun and hardly getting her opened up before hitting a red light. I was sitting up front watching this tiny thing swing around and around. Then the spinning stopped and she let gravity pull her slowly down. I was leering at her and she was eyeing me with big lusty eyes, waiting for me to make a move toward my pocket.

The song faded out and she’d sunk down to stage level. A new girl came up and I think they must’ve had a bet about who could get any money out of me, because this young blonde immediately gripped the pole and bent over and started punching herself in the ass. I was surprised, but didn’t let on. I sat there, watching the impacts ripple down her thigh, and I thought about all the things I’d like to do to her if I had maybe just twenty bucks.

I sunk down into the chair, staring at the back of her like a Thanksgiving turkey, and  suddenly got the feeling of all the other eyes on me. There were the other girls off sidestage, wondering what to do to get a couple bucks out of me. The bartender waiting for my mouth to get dry. The bouncer wanting to toss me into the neon street. And that girl on stage just letting loose, raining fists on her own sweaty, glorious ass, tallying each hit up to another dollar that I owed her.

This place was like that. It made a person think about everything he owed. I started feeling indebted to everyone there, like I was getting something I had no right to. I sunk farther into the chair and my heart sunk a little farther into me. I didn’t belong here.

Outside, the street smelled to high heaven and when I looked down a nearby alley there was a couple going at it like two feral cats. The woman’s skirt was up around her waist. She had her hands up against the brick wall and her legs spread like an officer was about to shake her down, but what she got instead was this guy up on his tiptoes with every thrust. He must’ve been huge, what with her legs spread out like that and still yelping. There’s nothing else to say about it. It was beautiful. It looked like real love, so I walked on and left them to it.

He looked older than he probably was, his skin tanned and wrinkled and yellowed in the lights. It was the middle of the week and the streets were mostly empty. I looked up and down the street. There was the hum of brightness and the glow off the concrete. There was trash in the gutters. I wondered how much money he might have on him.

“You know a place that’s got beer for a quarter?” I said.

He narrowed one of his eyes. He was onto me.

“Never mind,” he said. He turned and started away.

“Wait,” I said, reaching after him like he was a balloon I’d just let go of.

“Screw you.” He kept walking and I watched him turn a corner and disappear.

That was my chance, I thought. I bet that bastard had plenty of money for a beer. At least a pint.

So then I started feeling like I’d been had. There was nobody around. I could’ve socked him one in the gut, one big one, and emptied his raggedy pockets while he sucked for air. That’s the thing, I thought. Some people just need to be reminded of their priorities. Some people just lose sight of what’s important in the world. Knock the wind out of a guy and for a few minutes breathing is the most important thing, getting air to inflate the lungs, and money be damned. Here, take it. I don’t care. I just need air, give me some space. I want to breathe again. Take the money. Please.

An old lady screamed like a fire engine. Torn from my self-pity, I turned the corner and down the way was a handsome middle-aged woman in heels, all dolled-up on the sidewalk, crying and screaming about her purse. And there was that guy, the same goddamn guy, sprinting my way with a purse in hand.

What luck. Here was the world giving me something back for a change, like all my debts were paid off. He’d seen me come around the corner and for a second it looked like he might dart the other way. I stood there and he must’ve thought I wouldn’t do anything because he kept coming straight at me.

In the air was the howling and in my heart was a feeling, the feeling of the traffic light turning to green and me shifting to fourth in a matter of seconds.

He stared at me as he got closer, his eyes scared like a rabbit’s but a little smirk on his face, too. I knew that rush. He stared at me, expected me to move out of the way, but I did no such thing.

This was my chance to redeem myself, to earn something.

Right as he came up on me I bodychecked him into the brick wall, and I heard his skull hit up against it. The woman stopped screaming for a second as he crumpled to the ground, but started up again when I kicked him in the stomach. I thought the guy was out but when I buried my shoe into him he grabbed my leg and twisted it, pulling me to the ground. We rolled around getting elbows in, each of us trying to come up on top. He got a clean swing on my nose and immediately I was pouring blood all over myself and all over him, too, and still we were rolling and we ended up in the street between two parked cars. He was on top of me trying to get his knees on my arms. I spotted a bottle in the gutter and I swung it up against the side of his face with a crack. I think I probably broke his jaw.

This is my chance, I thought.

He rolled off me and blood oozed from his left ear, thick like sap from a tree. That’s how I thought of him. A tree to be felled. He was moaning and the woman had stopped screaming. She just stood there with both hands in her hair. She might have puked on the sidewalk. I picked up the purse and ran in the other direction.

The purse had forty-eight dollars in it, but I figured I ought to wash up before I went to spend it. I had dried blood all over my face, on my forearms and my hands. My shirt looked like a slaughterhouse floor. I smiled to myself. I shoved the bills in my front pocket and tossed the purse into a dumpster.

Down at the river the smell of the city was thinned by a breeze coming up the water. The moon was bright and the stars weren’t there. A tugboat pushed a load of barges past me upriver, the engine silent in the night. The engine was running. The engine was strong. I took off my shoes and rolled up my pants, and when I stepped into the water I sunk to my knees in mud, but stopped sinking when my feet hit a harder layer below. It all felt very familiar. I scrubbed off my arms and splashed water on my face. I got cleaned up.

Kevin Weidner hails from Missouri and currently lives in Tuscaloosa, where he is pursuing an MFA in creative writing at the University of Alabama. Work has appeared in Hayden's Ferry Review, storySouth, Midwestern Gothic, PANK, and elsewhere. He edits the online journal 751 Magazine.