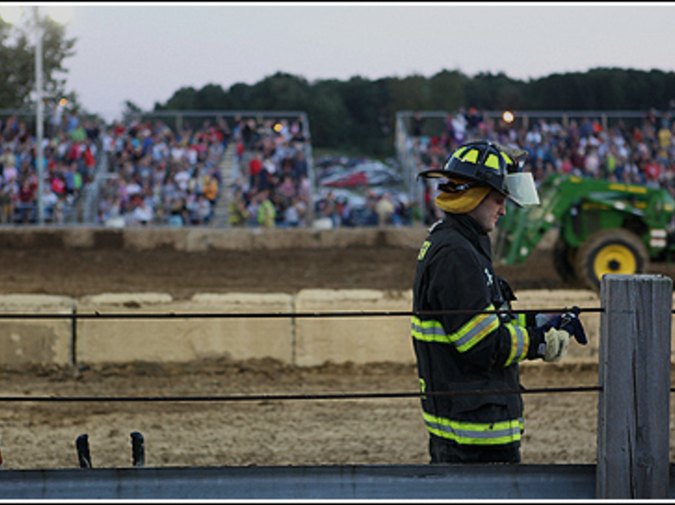 The drought has been going on for so long that there's a separate number to call for grass fires. You can't call 911 anymore, so you dial 411 and instead of asking for an address or a phone number, you report a grass fire. A bored woman asks you how large the fire is, whether it's windy where you are, and if you can see any small children or dogs in harm's way. In due time, a fire truck shows up and a crew jumps out of the back, sweating and hot in their heavy jackets, and they spray foam all over the ground. Not water. You need that for drinking, and for the Mr. Turtle pools that you set up for small children and their small dogs in the shade of a withering birch tree because it is so damn hot. They lie in the water and look at you with dark, wet eyes.

The foam the fire brigade uses is pink. Sickly pink, thick and globby, and it squirts out of a canister welded to the side of the fire truck, puffing up into ridiculous pink clouds of sticky, thickly pink foam that smothers the fire. It can smother living things, too, and in the early days of the drought, there were several tragedies.

This is why the woman from 411 will ask about small children and their dogs. They like to play in the foam. After the fire is out, and the fire truck has pulled away from a vacant lot or a hillside by the highway, the children come creeping out to look for the adults. If they see none, they jump into the pillow and hillocks of foam, sliding and squealing. It is still warm from the fire on the bottom, cool in the  middle, and warm on the top from the sun. These children come home with wads of foam dripping off the backs of their legs, and it takes a long time to get it out of their ears with cotton swabs.

You know they will come home the same way the next day, and the next.

Still with the drought. Still with the grass fires. The water for the Mr. Turtle pools is soon too precious. You save it for drinking and for cleaning your sticky, pink children. Your lips grow dry and cracked. Everywhere you look, there are patches of pink foam, pink islands surrounded by a sea of yellowed grass, and although the foam looks like it might taste of peppermint or strawberries, it only tastes like what you imagine the oil floating around in the Gulf of Mexico might be like. Foul. It smells like a mouldy old flip-flop left at the bottom of a health club locker, or like the cracked underside of an ancient sneaker. You start to breathe through your mouth whenever you can remember to do it.

At the office, the air conditioning is cranked up so high that your teeth chatter, and you huddle in old sweaters and pilled fleece zip-up jackets you bought on vacation the year before. You shuffle around like an old woman, complaining that it's too cold. You step outside on your breaks to look at the traffic rushing by, and you complain that it’s too hold and head back indoors. You answer the phones with rushed and surly words, and when you are reprimanded by your boss, you return to your cubicle in tears. The sting of salt on cracked lips is almost too much to bear.

Water is rationed. One flush per eight uses of the toilet, and you start to work at training your reluctant bowels to move at the end of the day, on the eighth use, because you can't stand the smell otherwise. It's possible that the neighbours aren't doing the same - it's always possible, but everybody is supposed to do their bit, and if that means that you stop using china and start eating your dinner off paper plates to spare the water you'd use for suds, well, you just do. You have given up tea and coffee long ago; your caffeine headaches stab you in the temples for days on end because it isn't right to waste water like that. Not on cappuccinos or lattes or americanos. You are too fitfully conscientious to indulge.

The islands of pink foam are beginning to join up. Pink archipelagos everywhere. The power grid is overloaded - too many air conditioners whirring away in the heat of the day, and now there are brownouts and rolling blackouts. You turn the a/c off at night and open the windows, sleeping with the smell of the pink foam entering your dreams.

There is another grass fire by the time you get home from work. Somebody has called 411 and now one side of the street is a rapidly congealing mass of pink foam. In times like these, there is no fresh milk. The cows aren't giving enough, and what they do let down is saved for the old and the very sick. You begin to drink condensed milk from cans, fruit punch from bottles, and the emergency case of bottled water you were obliged to buy during disaster awareness week several years ago. It has a faint tinge of plastic to it, a chemical taste that lingers on the back of the tongue. You tell the children not to play outside, but you don't have to because they only want to sit in the basement and read. It is too hot for even them.

Everybody is angry. You are, I am, we all are. You make obscene gestures as you drive to work, and you snap at your children. You don't care to have sex at night because you don't feel sexy, you feel thirsty. You restrain yourself from kicking the small dogs, but you want to. Oh, yes, you want to. You are hot, you are tired, and you are slightly encrusted with a salty rime that prickles and burns. You try not to look at the riverbed, to see the rocks that have never been exposed before. You blame global warming and China. You hate the colour pink. You post angry rants on your Facebook, and your tweets are bitter. There are fist fights on the train, scathing op-ed columns in the paper, and a general sense of doom and despair that coats you like pink foam coats the bottoms of your shoes and the hands of your children. You want to leave, to go away, but there is nowhere that isn't dry, no place that isn't too hot, and no money to leave with. You consider chipping away at the ice in the freezer and melting it down just to have a decent bath, because you can't stand cleaning yourself with alcohol and baby wipes, and then you are guiltily angry at yourself for not thinking that you would bathe the children first. You make another angry comment on Facebook. You click the like button on sad posts.

When there is the briefest of rain showers, you race outdoors with buckets, telling the children to strip down and run around, and you laugh and cry and say to them, see? It's over, it's over! But the rain doesn't last long enough, and all it seems to do is melt the pink foam and now the air is filled with the thick smell of rain on a hot summer's day, but there is no more rain to speak of. The sparrows, weakly cheeping, have tried to drink as much as they can but the sun burns off the puddles, dries it all up, and they are left staring glumly at you. You have nothing to offer them. You wonder what the point is. Of what, you're not sure. Of anything.

It's not the end of the world, not really, not yet, but you trudge about your days as if it is, and you fall into a semi-permanent sneer. When Wanda, cheerful Wanda, whom everybody at the office loves, is finally due to retire, there is a party for her: an entire pot of coffee is made—the waste! the luxury!—and somebody brings in a fancy tablecloth and decorates the lunchroom with balloons and streamers. Your boss, the one who made you cry, gives a speech, and you think about how much you hate him, even though it's a silly thing to feel so angry at a going away party. Somebody has brought in a huge rectangular slab cake, no doubt made with condensed milk and sour cream, covered in pink frosting that reminds you, for one revolting moment, of the fire retardant foam that covers your dead rhododendrons in the front yard. As you stand there, clutching a cup of precious coffee and watching Wanda cry over her fare-thee-well party, you are consumed with a dry, dusty hate that fills your mouth with dust and ash, your chest heaving as though it is filled with slimy pink foam. All you can think of is the sarcastic Facebook group you will start tonight: the one that is called I Bet I Can Find A Million People Who Hate Slab Cakes.

Heather Clitheroe lives in Calgary, Alberta - a place that can often be hot and dry, and where people are constantly worried about drought. Besides Hobart, you can find her work in Awkward Two,'Evolve: Vampire Stories of the New Undead,' andKaleidotrope...and elsewhere. When she's not at the Banff Centre for the Arts, she's in her office cubicle or at the library...or online at www.lectio.ca. She's not a fan of slab cakes, either.