How To Unclog Your Lover’s Toilet 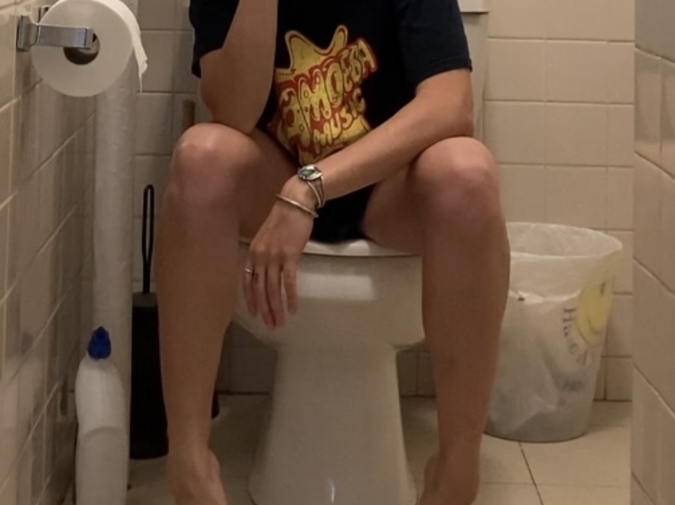 The first time I go to take a shit at my boyfriend’s house I have a little pep talk with myself in the mirror first.

“This isn’t a big deal,” I say, “he’s pooped with you around plenty of times.” Which is true.

Theoretically I’m definitely a girl who would be down to poop at her boyfriend’s house. I think probably it’s feminist, and possibly even punk rock to poop at your boyfriend’s house. It’s definitely cool, like in the sense of, ‘most people would be embarrassed by this but I’m not because I’m evolved and and disarmingly self-assured,’ which is a vibe I tend to give people when I’m not dating them yet.

On the night we met I drank too much and had to find a bush to squat behind on the way home. I usually can’t even pee in front of my best friends, but there, next to him, crouched in between the meager yards of outer North Hollywood apartment complexes, it was no problem. Some combination of alcohol and the well-founded (if ultimately erroneous) assumption that I’d never see him again emptied me without self consciousness or hesitation. It helped that he was only in town for the weekend. I hummed a Carly Rae Jepsen song that had been playing in the bar earlier and it came streaming out of me, hot and diluted by five dollar PBRs. I wanted him to know that this didn’t matter to me, that I thought of him as if he was already gone.

Afterwards, I grabbed his hand and steered us vaguely in the direction of a taco truck on Magnolia, stumble stepping and delivering a semi-coherent monologue about capitalism and Madonna. We looked over the long list of meats and ways to configure them in a tortilla and he asked if I was “vegan or anything.” I said no defiantly – half because I’m not, and half because I thought he would approve. “So many people have weird food things in this city,” he said, and I searched his voice for the hint of a scoff. He just shrugged. “I’m glad you can eat whatever.”

“Yeaghff,” I agreed through a large mouthful of carnitas, to illustrate just how much of whatever I could eat.

He was looking at me, thinking something very obvious, like, “This girl is cool. She takes big bites and says what she thinks and thinks what she says and pisses in other people’s yards and I’m pretty sure she’s not wearing a bra.” And he wasn’t entirely wrong.

The trouble is this: the whole taking big bites and having opinions about capitalism and Madonna and not wearing a bra thing has a distinct shelf life, or at least its appeal does. Given enough booze and some decent lighting, it’s pretty easy to create one’s self in a night. But the thing that I knew in that moment which he didn’t know was that the longer he dates me the less I will manage to resemble my creation.

I will stop taking big bites. He will learn that although it’s true that I’m not vegan, it’s not true that I don’t have weird food stuff. He will learn that I almost never eat tacos and when I do I feel the sour panic of a dormant eating disorder coaxing them back up in my throat. That will be really unattractive to him in the way that scary things you can neither understand nor control usually are.

He will realize that he thought he was getting someone who Doesn’t Give A Fuck™ in a playful, Instagrammable way, but instead got me, who for long stretches of time just doesn’t care. Me, whose moodiness is not French enough to be sexy, whose sadness is not cinematic enough to be profound, who is at her best on first dates, in the inscrutable haze of mystery and hopefulness.

I’ve never lived with someone before. I’ve shared an apartment, of course. But I’ve never taped my life up in a box with someone else’s and given it a good shake. I’ve always had some place to retreat to, lick my wounds. Change costumes. What I’m saying is it’s hard to put on a good show when there’s no backstage.

My boyfriend is a big bear of a man. He is covered in thick, curly tufts of hair which peek out of necklines and carpet the bathroom floor if he goes too long without vacuuming. His voice is impossibly booming and deep, as if pulled downward by the gravity of confidence. The point is, when he shits you’re supposed to know about it. The smell is supposed to run from room to room announcing itself to the whole house.

There’s something sexy about it, even. Something about how unbothered he gets to be, how little he minds if I hear it or smell it, and how much he trusts me to still want him afterwards.

I am a small person, partly by nature and partly by design. I am often asked to speak up. I cross my arms when walking into rooms. That kind of thing.

I have tried to convince him that I am not small. That I have never wanted to make myself even smaller. That I am not afraid of being unquiet. That there is some great mystery in getting to know me that doesn’t involve my many terrible smallnesses. But it is a lie.

I know it’s a lie because I’ve never pooped at his apartment. My poops are not small. They are big and loud, the kind that echo in the toilet bowl and linger in the air impervious to freshening sprays or the sulfuric bite of a match. So I hold them inside my body until they can’t betray me.

The whole first week after moving into his Brooklyn apartment – our apartment he keeps correcting me – I’m horribly constipated. I sit on the couch which is a mere several feet away from the bathroom door and listen to the muffled sounds of a body emptying itself proudly while mine churns and packs more tightly.

On day four, he begins to get worried about me. He buys some natural laxative tea at the bodega and makes me a cup before bed. When after two nights of this my bowels remain unmoved he suggests we try something a little stronger. I buy a bottle of shiny little stool softeners in the pharmacy and never meet the eyes of the man who sells them to me.

The package says to take one but I take two. They don’t know my insides like I do.

When I return, my boyfriend is in the kitchen making breakfast for us. I can still hear him humming along to the stereo even after I close the bathroom door. If I fart right now he will definitely hear it.

I farted next to him once (accidentally) and he laughed and called it adorable. But still. I wonder how many farts, and which kinds, that holds true for.

For that matter, how many pimples? How many period-stained sheets? How many pounds on hips, or hairs on nipples? How many unguarded moments reading on the couch, forgetting to arrange my face into its most flattering shapes? And how much petty anger, how much bitterness, how many unfun drunk nights, how much aimless sadness?

You know the joke about girls not pooping, right? The punchline is something about the inherent absurdity that women somehow magically keep all their unsavory bits stuffed up further and further into their bowels and never let them out. In order for it to be funny we need to all collectively and immediately understand the expectation that women should, in fact, keep all their unsavory bits stuffed away somewhere and never let them out. There is no joke about men not pooping because it wouldn’t be funny.

The shit finally comes out of me and when it does it goes on forever. It looks like a core sample pulled from the depths of hell, the days packed together and layered one on top of the other in dark, stinking strata. I can see the night we cooked quinoa, and the morning we roasted beets and eggs.

When I flush it barely moves. Hardly surprising given its size and density but I still curse the toilet, our landlord, and New York City plumbing in a long stream of prayer-like expletives.

We bought a plunger when we moved in, like two real adults foreseeing the inevitable and getting out ahead of it. But it is a cheap, flimsy thing, and, as it turns out, not at all up to the task at hand. I’m in the middle of Googling innovative toilet declogging methods involving dish soap when he knocks on the door and asks, a little hesitantly, if everything is ok.

Everything is not ok. I wish to be swallowed by the toilet, along with my terrible creation. I remember a story I once heard about a woman who clogged the toilet on a first date and threw her own feces out of her date’s window with her bare hands. At the time I remember feeling mortified for her but today I would gladly trade places. I wish this was a first date. I wish I could walk out of here and be nothing more than a wasted Saturday night and a funny story for later.

I wish I could go home and get drunk on my old couch with the wine stains on the arm rests. I could cry meaninglessly about probably being alone forever, and then, with ruined mascara still slashed grotesquely across my cheeks, remake myself from scratch in the ever-forgiving DMs of an unsuspecting stranger.

Our bathroom has no window to climb out of, though, and that couch is languishing in a landfill in a city 3,000 miles away, so I open the door that he is on the other side of.

He brings the dish soap and reads instructions to me from his phone as we stand anxiously over the swirling mess of my most unsavory bits, willing it to stay contained by the toilet bowl. I don’t want to look at him, but I finally do.

He’s got his T-shirt pulled over his nose and I can tell he’s laughing under there, but his eyes are kind. And then he’s looking at me again, the way I’ve caught him looking at me a hundred times before, that way that I always found very easy to decipher. Except this time I have no idea what he’s thinking. When he kisses me it’s warm and unflinching, and I wonder, for the first time, what he thought he saw.

Misha Scott is a video editor and recent New York transplant. In her spare time, she runs a blog for music and creative writing called Hullabaloo, but she’s still getting used to calling herself a writer in bios. Her work can also be found in Gold Flake Paint, Five 2 One, Slutever, and Jr Hi Magazine. She has an on-again-off-again relationship with Twitter at @mishadavia.