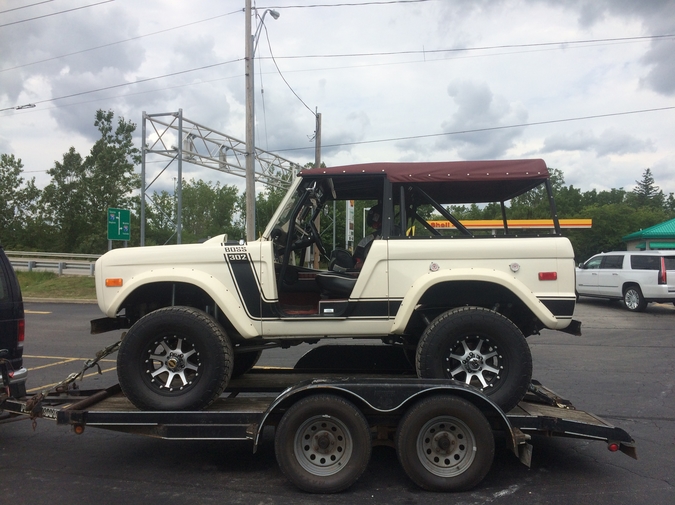 Sitting in the Montreal bus terminal I make a decision. To eat the last of my weed candies. I munch them down. Throw the wrapper on the ground. I have little more than an hour before we hit the American border.

Which should be just enough time for the gummies to kick in. I tell myself that this is the key. A deep feeling of contentment and bliss should be hitting me full on as the bus pulls up to the guard booth. I'm convinced it'll be easy. Like the Sunday morning in that Commodores song.

And sure the gummies wash over me in time. But it's not exactly what I had in mind.

I spend the next hour heavy lidded. Looking out the window. As the bus blasts south through a heavy rainstorm. I think about New York City. How I've never been. And how I'm going because I've been asked to read. By people whose writing I like.

At the border the bus stops. The driver comes over the intercom. He says things like we could be awhile and you never know what might happen. People all around begin to shuffle in their seats. Murmur. I ignore them. I look out the window.

But I can't get a feeling for what to expect. The action is minimal. We're about three deep in a line of busses. To the right is a small one story grey building. SUV's with the emblem of the U.S. Border patrol on the door are parked along the side.

A man comes out of the building. From this angle I only get a glimpse. But it's all there. Crew cut. S.W.A.T team uniform. Boots. Pistol on the hip. Authority. Military swagger. Total motherfucker.

He gets on a bus idling in front of us. I lose sight of him. But in a minute he gets off. Escorts people into the building single file. There must be sixty people on it. And the one behind it too. We're going to be here all morning. I lean back in my seat. Close my eyes. Snooze.

When I open them the bus is pulling up to the door. Something makes me want to sit up straight. This is it, I tell myself, time to look like a regular citizen. Like I give a shit about mortgages. Taxes. Full time jobs. And a future too far away to touch.

But nothing happens. We just sit there in anxious terror for about five minutes. All part of the procedure I'm sure. Then the guard comes stomping out. Slowly. Can't be sure if it's the same one I saw before. But all the markings are the same. And I'm certain he hails from the exact same tribe of bullies.

The driver opens the door. From where I'm sitting at the back. I watch the guard's dark brown crew cut come up the stairs. At the top he makes an about face. Shoulders squared just like his hair. His mustachioed face slowly scans us over before saying a word.

All right, listen up, he barks, I don’t want to have to repeat myself fifty times. So I lean forward as far as I can. Sure not to miss any of the rules. Like no bags no purses no laptops. Cellular phones must be turned off. Passports and supporting documents only. Some conditions apply. You may be subject to a fee for entry. Cash only.

He stomps back off the bus. The driver follows. The passengers closest to the door get up. Shuffle off. I stay seated. Slide my hand deep into the one small bag I brought along. I take all of the cash I have hidden there. Place it into my pocket. I'm not stupid. Sticky fingered authority figures are nothing new.

I file off the bus like expected. But a few people stay back. Faces washed with confusion and fear. I wonder how many of them only have a slight grasp on English. And are clueless to what they're about to walk into.

But that's none of my concern. They're on their own. I have to think straight. Self preservation. Just answer the questions. Yes sir! No ma'am! I'm a hardworking individual. With strong ties to the community.

All lies. But I'm sure I can make them sound good.

Inside I wait in line. Look around. I've never seen so many buzz cuts. A row of guards sitting behind a counter. They're set up like bank tellers.  More are pacing around. Strutting like attack animals. Keeping an eye on us like we're all about to fucking crack. Guilt assumed right off the hop.

Then some fool a few people back from me. He pulls out his phone. Makes a fucking call on it. Real stupidity. Not the place for this sort of civil disobedience. A guard notices. And is on him quick. Turn off your phone! he snaps. One hand closing around the handle of his baton.

I prepare myself to see some blood. But it stops short of that. I sigh with relief when the man turns off his phone. Slides it back in his pocket. And the guard turns his wide back to him. Swaggering off like he won the big fight.

Behind the counter they start waving people from the bus ahead. I'm glad I'm farther back in line. And can get a handle on how things are supposed to run. Slide passport across. Maintain eye contact. Never hesitate.

I watch as they go through the passengers. And notice anyone with skin a darker shade than ivory soap is given a rough time. Grilled longer. Then told to wait in an area of seats off to the side. Until deeper checks can be made into their backgrounds. And they get a heavy-handed pass from suspicious eyes.

Of course. Some of the guards look nicer then others. And I start to hold out hope that I'll catch one of the ones with a kindness in their face. But as the line ahead diminishes. It starts to seem like my wishes aren't going to materialize.

All of a sudden. Right at the front of the line. I remember how fucking stoned I am. I laugh a little. But just to myself. And not for long. I don’t get the chance. Because I'm being beckoned. Two short flicks from the fingers of one of the meanest looking assholes sitting there.

I gulp as I walk towards him. Push my passport across the desk. He takes it. Studies it. Holds my eyes with his. I want to look away. Just beyond him. Where I normally rest my gaze. But I know I can't. So in my head I practice my mantra.

Where do you live? Where are you going?  he asks. Easy shit. So I tell him. Montreal and New York. Then he asks what I'll be doing? The reason for my trip. This is where most amateurs pipe up. Say stupid things like I'm a writer and I'm here to read with a big shit eating grin across their face.

But I'm wise. And know how these things work. Blend in with the tourists. Just another dipshit on vacation. So I say I'm here to visit friends.

Where do you know these friends from? And that's when time slows down. And my mind starts racing. Of course the truth wants to force it's way out. But that's not good. I can picture his reaction when I tell him what he doesn't want to hear.

Well sir, I'm going to New York to meet a young poet. Pretty much a boy. I know him from the internet. Then we're off to Jersey. To stay in the apartment of a burly sensitive construction worker. I'm sure you hear this sort of thing all the time.

But of course he doesn’t. And the next step would be me calmly escorted to some back room. Or another building altogether. Where I'm delivered a professional beating. From connoisseurs.

Then quick as lighting I lie. Like I love to do. And I tell him that we're old school chums. Which almost makes me laugh out loud. Because maybe Bud and I. We're close in age. But I'm meeting Joey straight from the bus. And he's a god dammed kid. Fifteen years my junior. I would've had to be the teacher.

So I hope the guard drops the subject quick.

I'm still holding eye contact with him. Which must be a new record for me. And I feel like it works to my advantage. Because he moves on. Asks me what I do for a living. And how long I plan on staying.

So I give him my answers. Like screen print and a couple days. He asks if I make shirts. And I say yes sir. He looks back and forth from my passport to my eyes. And I stand there. Wondering if shaving off the long hair in the picture two day ago wasn't a bad idea. Hoping he sees the same person in both.

Which he must. Because he gives me back my passport. Waves me over to where everyone who was cleared before me is standing. I tell him thank you. And to have a nice weekend. The well wishes are not reciprocated.

Eventually everyone is cleared. We wait around. The driver paces like he was ready to go before we got here. Another patrol guard comes in. Says the bus is good. That we're able to leave.

I find my seat at the back. Sit down. Ready myself for the next seven hours. I know I won't sleep. Or be able to read. I'm too excited. Because if you'd asked to two years ago. That if I thought my writing would take me to New York City. I would've laughed in your face.

And let's be honest. You would've had it coming.

Steve Anwyll's novel Welfare is coming out fall 2018 from Tyrant. He runs the twitter oneloveasshole.