Heart of the Hide 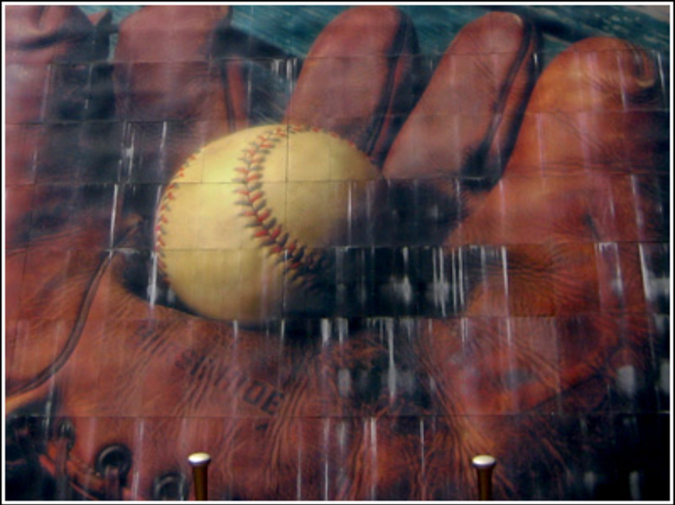 Frank wanted a "heart of the hide" glove ever since he was in the PeeWees, but the dad of all knowledge said nothing doing, a glove like that had to be earned, game by game, and by earned he didn't mean a season of games but an eon. The old man quoted some philosopher and said he didn't go for the whole business of buying kids three-figure equipment before they showed one-figure prowess. That wasn't the way Honus Wagner did it, wasn't the way Musial did it, and it sure wasn't the way the old man himself did it. So Frank, who wanted a Rawlings, got a RawHide, from Gibson's Discount City, a glove that was made in a half-minute by some Pacific Rim machine and wasn't even true to its name, the principle material of construction being pigskin. Pigskin, mushy and thin, cool for a wallet, cool for a watch band, but when it comes to baseball glove price/performance, one step above newspaper.

And newspaper is what the old man stuffed under the pigskin. But only for a while, until Frank built up some callous. The dad, once an ump in the boonies, had done the same thing coming up. He'd also used a broomstick for a bat.

So Frank went through all of Little League toting a starter glove. Hey, that's just what Little League is, the old man said, a starter league. But the coaches still wrote things down, the parents still yapped, and Frank had a rep, just like any player at any level. He was known for fast hands when they were curled around the neck of a bat, and slow ones when he was hounding balls in the outfield, and the old man didn't go for that, not for one second.

The old RawHide did get tossed when the Pony League came up. But the old man said this was only because Frank's fingers were thicker and longer. Not because he'd earned it.

Frank pleaded his case, even wrote the old man a note quoting Jackie Robinson. His friends had Mizunas and Nokomas. He wanted to go to a genuine sports store, not some bargain barn where the ladies department was nine times bigger than the sports section. But it was back to Gibson's Discount City, and back to RawHide. Back to the pigskin that might as well have made a nice prom glove for Libby, Frank's girlfriend, but was a palm-burner when a screaming liner struck the pocket. The price was five bucks higher than the old pigskin, and Frank knew this was no upgrade, no reward. It was just because his new hand size needed more pigskin.

You're in the Ponys now, the old man said, you work on scooping those liners before they fall in for singles, you work on moving your tail when you hear the crack of the bat, not when you see the pill in the sky. You work and you work and let me worry about the gear.

Frank became a notable in the Ponys. Someone to watch, a kid with a future. He was known for spraying hits all over the field, from one foul pole to the other, very rare in a young player. He was known for hustle in the outfield. Not circus catches â€“ he was no acrobat â€“ but he kept his ears perked and usually got the jump on the hitter.

High school was next. But before that, the South Shore League. July and August. It drew influentials. The school coaches went to every game. Occasionally, scouts had been seen jotting on clipboards.

Tryouts were six weeks away, and, during a weekend breakfast Frank would never forget, the old man said they were going glove shopping. At Hanson's, the premier sporting goods store. The Hanson's baseball department was wide and deep, the salespeople were players, and a special group did big wholesale orders for school teams.

Heart of the hide? Frank asked.

Heart of the hide, the old man answered. And they were off in the car.

The Hanson's salesman explained what Frank pretty much knew already. That the best baseball gloves come from the hide along the cow's backbone. Cows do most of their growing in the belly region. This stretches and compromises the belly hide. Not so up by the backbone. It's the best of the beast.

By definition, a heart of the hide glove, cut from backbone skins, is top of the line. And the old man bought Frank one, a Rawlings. You may have this for the rest of your life, he said, it's your gamer. Cal Ripken locked his gamer up and wouldn't let anyone near it. Yogi Berra rubbed his with shaving cream and swore by spinning it in the dryer for a day or two.

Frank did what Yogi did and more. He rubbed it with Vaseline, saddle soap and neatsfoot oil. He greased it and baked it in the oven for four minutes. He went to a batting machine and caught fastballs to form a pocket. At night he used old shoelaces to tie a ball inside the glove to keep the pocket intact.

At about the same time Frank got his glove, Libby got a new video camera, a Sony with all the bells and whistles. She was a movie nut. She looked gorgeous holding a camera, the way she swayed with it for those shaky-cam shots. She had a knack with a whip-pan and a zoom, and she loved tracking Frank loping after a long fly.

Every spare moment of daylight the old man had, he hit fungoes at Frank. Frank leapt high in the air to rob taters and dove to make shoestring catches, even a few with his belly sliding on the grass. The weeks before tryouts were good weeks. Frank felt he learned and he grew.

It wasn't that way at first, though, especially not for Frank's glove hand, his left. A hand doesn't think like a brain does. In a way it has a brain of its own. There were those flies that Frank muffed or nearly muffed, the kind he and the old pigskin snagged with ease. Everything was different about the new glove. Bigger web, bigger pocket and, especially, bigger leather. The pigskin had worn so thin Frank had sometimes felt he was playing barehanded.

But then Frank hit his groove with the new glove, and he was more of a threat than ever in left field, because the glove stretched his reach, and the reach stretched his range.

The day came. He made the team. He had serious competition, it wasn't cut and dried, but that was good. It made him focus. He hit sharply and made left field smaller with his stride and range.

Opening game was a picture-perfect day, the kind of day when beaches are swarmed and carnivals ring up records at the till. Frank had a family that could fill a small grandstand, and they were all there. Libby was outstanding in her sundress. She'd brought every lens she had. She blew him kisses all through batting practice.

The old man chewed the fat with the head umpire.

From the moment he stepped into the batter's box, Frank was locked in. Single to left, single to right, moonshot of an out to left, should have been a double but, even so, it drove in the tying run.

He made catches too, one a neat running scoop along the foul line, a shot that would have been trouble if they'd called it fair.

Then came one of those baseball moments the writers rhapsodize about. Light breeze in the outfield. Sun chasing the last puffs of clouds. Azure above, green below. Clocks running, but time seems to stop.

The bat cracked, and Frank could tell from the sound. Might have been a fungo stroked by his dad, lazy and high. He rambled in and stood under it. He raised his glove and prepared to squeeze. From the corner of his eye he saw Libby swaying. Everything seemed to take forever, the ball pausing, pure white against pure blue. The crowd quiet as the summer air.

At last, the ball fell from the sky and landed, with a smack like a fastball on the hard heel of the leather. It took a violent bounce, and another, and another, before Frank caught up to it.

His throw was a gunshot, a strike to the catcher, and one step behind the tying run.

The crowd now loud as thunder.

Five hours later, the cousins were still all over Frank's backyard, scarfing down barbecue and saying what cousins always say.

One said the sun got in his eyes. Another said it was the baseball gods.

The dad of philosophers quoted Ted Turner, who said losing is just learning how to win.