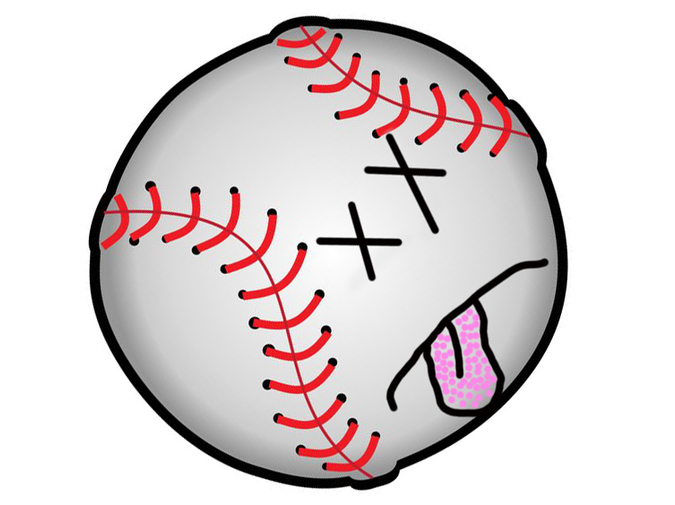 The fat ass coach was having me play catcher, and I didn’t like that. Didn’t like the gear. Or the weird crouch stance I had to be in behind home plate. I wanted to quit, and was too young to realize that I could just quit anything. I think I was waiting for WWIII to break out so all of Earth would die in nuclear fire so I didn’t have to be catcher on the little league team.

The field was overcome with goose shit. The ice cream truck kept playing “Pop Goes the Weasel” next to the overflowing dumpster. But I was looking up at the sky and the sky was purple and green and any second now there’d be the electric rip of lightning. I was smiling. I couldn’t wait for the game to be called.

The coach, all sweaty and stupid came lumbering over. “Hey! Why aren’t you in your gear!? Let’s go!”

I pulled the chest pad on. Put my metal mask on. Walked as slow as possible around the fence towards motherfucking home plate. And wouldn’t you know it, the sun came back out, my hopeful storm clouds dissolved.

I couldn’t hit, either. Home runs smashed over the wall and out of the stadium, smacking the hoods of cars, were the only reason I liked baseball anyways. I wanted a couple things from my life. I wanted to draw cartoons and get paid a million dollars. I wanted to be best friends with Metallica. I wanted to crush a grand slam in the bottom of the ninth to win the World Series and have it destroy a brand new Mercedes, triple parked sideways outside Yankee stadium, make the car explode in flame and shrapnel from the impact with that game winning ball. And since I couldn’t hit for shit, I knew my life would never be complete. No matter the other things.

The house we rented didn’t have a yard. But oddly, it was in a campground and we could do whatever we wanted in the entire campground after it “closed down” for the season. There were no other kids after Labor Day. I was bored and it’d finally stopped raining. My dad was at the junkyard working his second job. I woke my mom up in the middle of the day.

I walked with her down the dirt road. She worked night shift in a factory that made perfume and deodorant. She read thick horror novels. She had bowling trophies from before she’d met my dad. She was carrying a plastic bag from Wawa with fluorescent soft balls in it. She pitched in a league too, and because I’d been striking out a lot, and bitching about it, she agreed to teach me how to hit. There was a trick, she said. I was letting my Louisville Slugger drag behind me, through puddles and mud, pretending it was a club and that we were on a march through prehistoric jungle to kill brontosaurs.

We passed the station where the RVs dumped their sewage. Then we cut through empty campsites. No tents, music, coolers, laughing, yelling, life. Nothing but the rim of a tire and a picnic table with vacationer’s names carved into it, wet and rotting.

We crossed another dirt road. The general store had a sign on the door that said, “See You in Spring ’93.” There was a cabin farther down the hill from the store. Smoke was coming out of the chimney even though no one was supposed to be living there.

She set up so that when she pitched, the balls would hit the concrete block wall, and if I got a hit, the balls would fly into the cleared field where the campground had bulldozed the trees to make room for a volleyball court to be finished next year.

“Keep your eye on the ball,” she said.

“And when you swing, don’t swing like a mad man, swing to connect. If anything, swing easy. This isn’t home run derby. You’re trying to get on base.”

“There aren’t any bases.”

But I didn’t like baseball. I liked playing home run derby on some Nintendo games.

She threw the ball and I swung in an uppercut and missed and the ball slapped the concrete wall in the same spot the kids my age smashed the toads.

She took another fluorescent ball from the bag and stood up straight again and said, “Watch the ball. Connect. I know you can do this.”

She was patient and kind. I swung again and missed.

She said, “Don’t swing like that. Swing like you’re slicing down the horizon instead of up towards the sun, alright?”

“Forget what you know, and focus. Nothing matters and it’s all a game. Everything is just a dumb game.”

It was loving advice. Advice I’ve always known to be true after that.

My mom got into pitching stance. I settled in on my back leg and relaxed. Ready to try. To get better. Here came the pitch and I saw it as in slow motion. I saw every lace on the ball. I saw every dimple on the leather. I mean, it wasn’t hard anyway, it was a pink fluorescent softball half as big as a watermelon.

I reached way back with the bat and the bat slid through the air like it was the only happiness in the world and the world was complete now. I swung with hips and shoulders and my wrists rolled and elbows extended, locked—and there was the horizon, and I reached for it with the Louisville Slugger.

This time I did hit the ball.

And it was a missile cracked off the bat and headed straight at her teeth. She spun at the last second and the ball struck the side of her head and she dropped to the ground without a sound.

I stood there with the bat. She didn’t move.

I didn't want to get too close in case she jumped up to attack me in a blind rage. But the longer I waited and the longer she still hadn’t moved, I knew the truth. I’d hit her in the temple and she was dead. I’d seen enough 80s action movies to know, if you hit someone in the temple, that’s it for them. They dead.

I dropped the bat and ran around the front of the general store. The payphone was inside the store but the door was locked and I’d have to smash the window to get inside. I looked around for a rock big enough but there wasn’t anything but some pebbles in the sugar sand. Then I saw the smoke from the chimney of the cabin and I ran over to the cabin and I started pounding on the door with both fists.

There was yelling inside. After a minute the door flew open and there was a shirtless man with a wild gray beard and hateful eyes and I backed away in a panic and yelled, “Never mind! Sorry!”

Instead of running home and calling the paramedics I ran back behind the general store to get my bat to smash out the window to climb in and use the payphone. But there was my mom, starting to sit up. She puked into the grass.