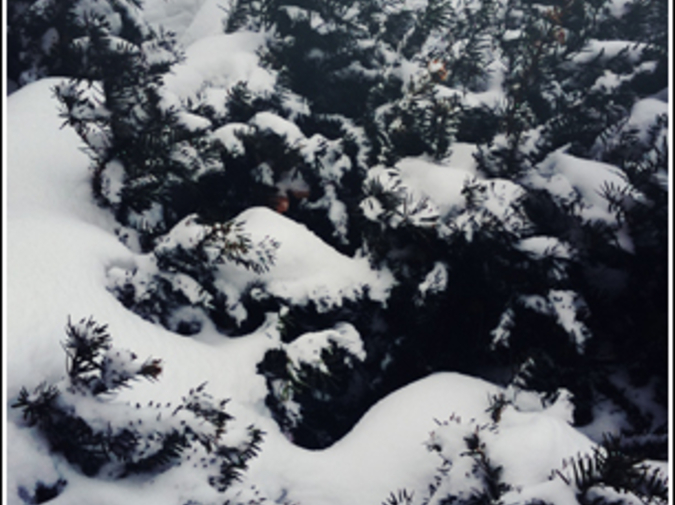 Here is one photo for each story in my story collection, Happy Rock. It is available now.

All the stories in Happy Rock are set in Upper Michigan. Most in the towns of Gladstone or Escanaba.

(Author's Note: As I have not been home to Upper Michigan in a few years, the photos in this photo essay were taking using a camera phone and the Google Maps Street View function. I stand firmly behind my decision to produce this photo essay in this way because the alternative would involve a plane ticket, a rental car, a nicer digital camera, and both flight anxiety-related & visiting home-related sedatives that the muckety-mucks at Hobart refused to purchase for me, despite the fact that this image suggests that they are shamefully wealthy.)

"We Never Ever Went to the Moon" 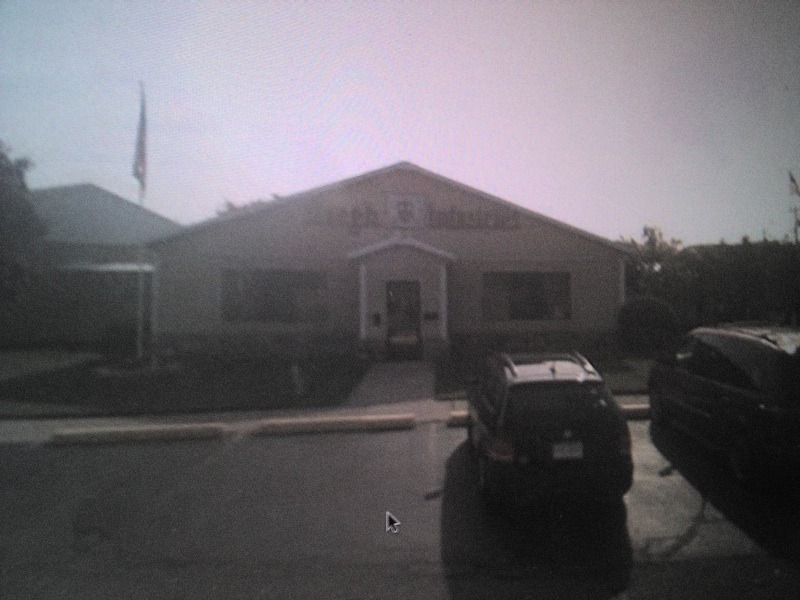 This is Hoegh Industries (ESTABLISHED IN 1966). They make pet caskets. Years ago, you could stop by and take a tour of the factory. You probably still can. I took the tour a few years ago, and admired the way they shaped flat sheets of plastic into solid little containers for the bodies of people's dear, dead pets. 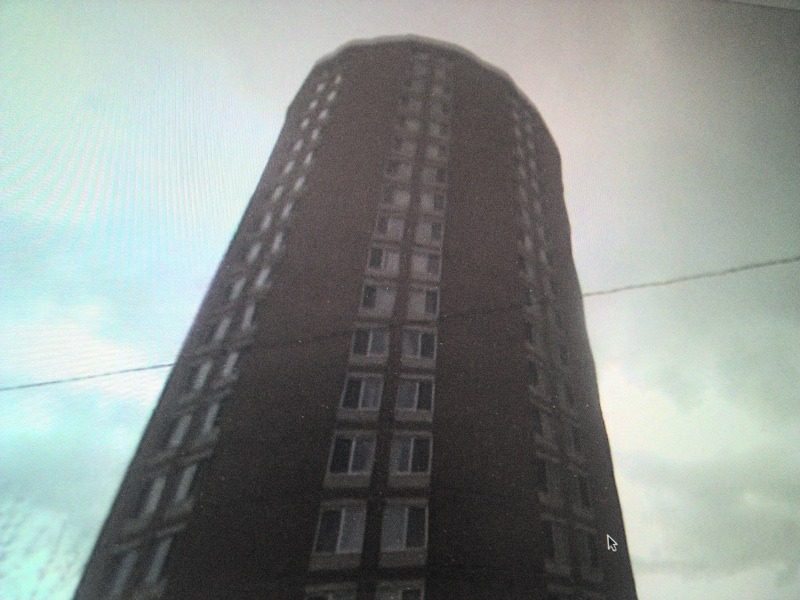 This is the Harbor Tower Apartments. It offers QUALITY LIVING WITH A GREAT VIEW. It is now smoke free. It is the tallest building in Escanaba, standing 18 stories high. 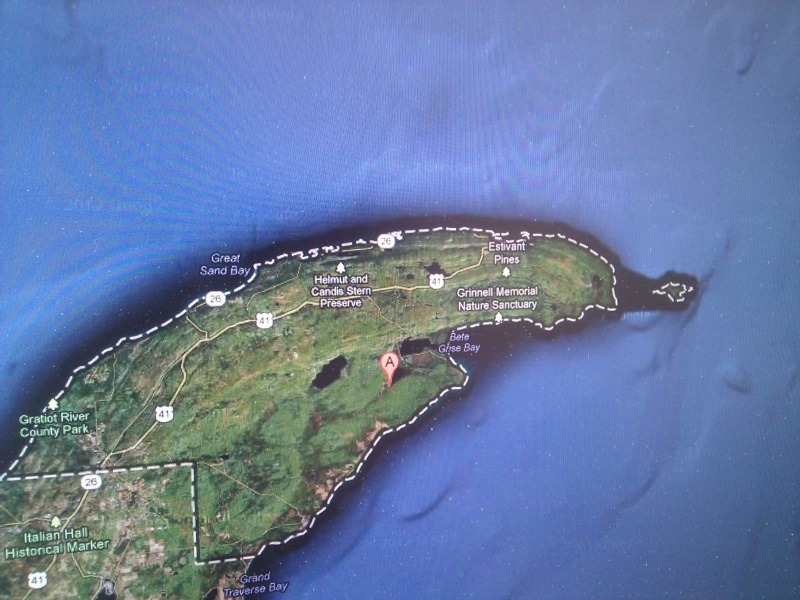 This is the Keweenaw Peninsula. The snow gets so deep here, sometimes it blocks your door and you have to leave your house through a window. Houghton, home of Michigan Technological University, is here. In Houghton, there have been a couple of noteworthy deaths. 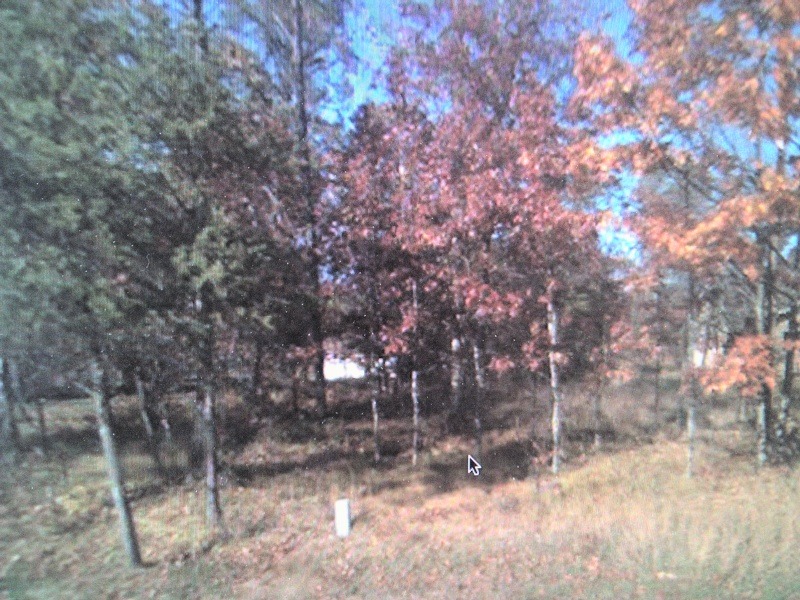 This is near my old house. Somewhere around the arrow is where we found a Lady's slipper orchid. It is illegal to pick them there. It's illegal to move them. You just have to leave them alone. Somewhere in that same area, we also found something that appeared to be a pot plant. A neighbor with more direct experience came over to check the plant out to see if it really was a pot plant. He dug it up and took it home, and as far as I know, he destroyed it. In another spot, a couple of pieces of plywood were used to hide a plastic garbage bag filled with pornographic magazines. They were, for the most part, Playboy magazines. I think there was a single Hustler. (I refuse to divulge the identity of the person who hid the magazines.) Farther back, you can find the place where we buried first our pet parakeet Susie, and then our pet Pekapoo Schatzie. 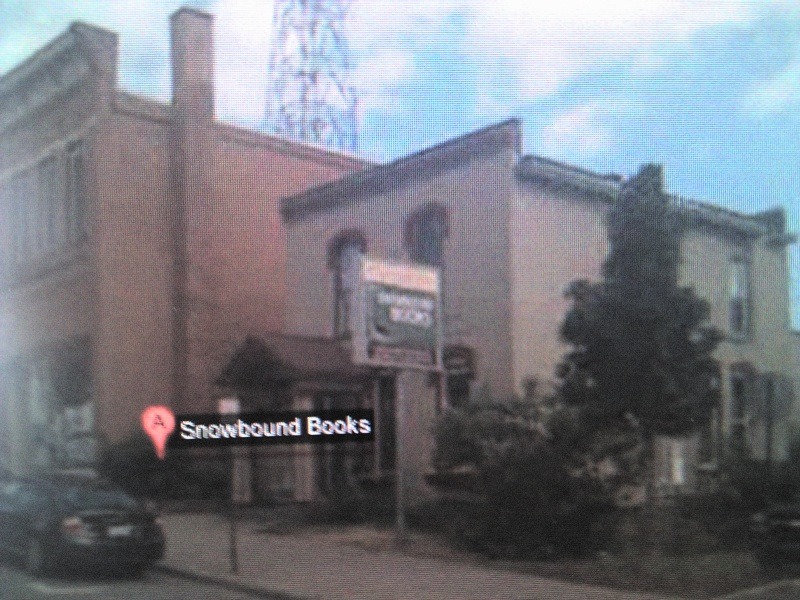 Marquette, Michigan's Snowbound Books is and probably always will be my favorite bookstore. 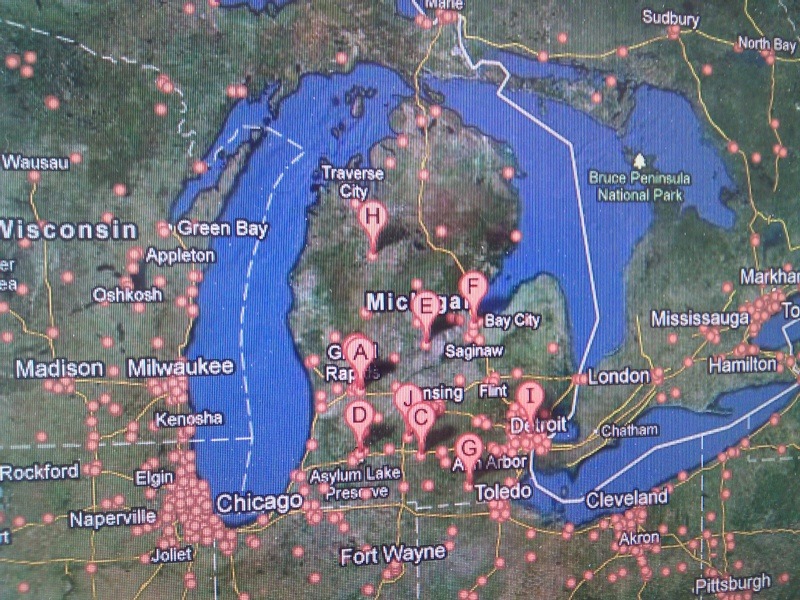 Here are all the places that appear if you check Michigan for the word "college." Here are all the colleges in Michigan. By the time I was about to graduate from high school, all of them had rejected me. I had no idea what to do next. For a short time, I started go-karts at a go-kart track. The go-karts have lawn mower engines. I started lawn mower engines all day for a couple of months. My employer and coworkers were all from the same family. I sometimes wondered if I might someday get a chance to hand out putters and golf balls for the mini-golf course instead of starting the go-karts, but I never got to. I started lawn mower engines all day, every day I worked there. The only variety was when I had to run out on the track and help kids who got hung up on the little fences around the track or got hung up on each other after a crash. 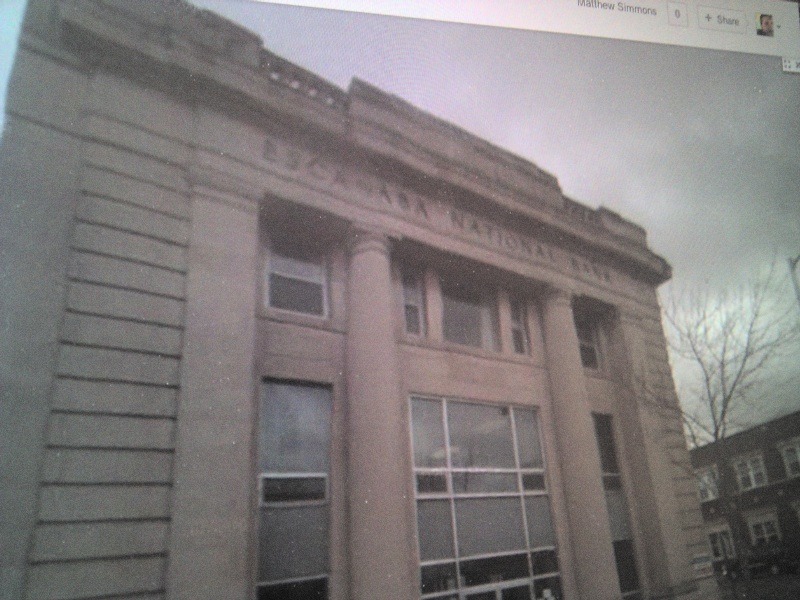 The women in "Happy Rock" work at a bank and talk to each other about work and the soda machine. They both have names. Happy Rock the book passes the Bechdel Test because of "Happy Rock" the story. My mother worked at a bank for a little while. She made some very nice friends, and thay are mostly all still in touch. In the fall, my folks go to Mexico with one such friend and his partner. 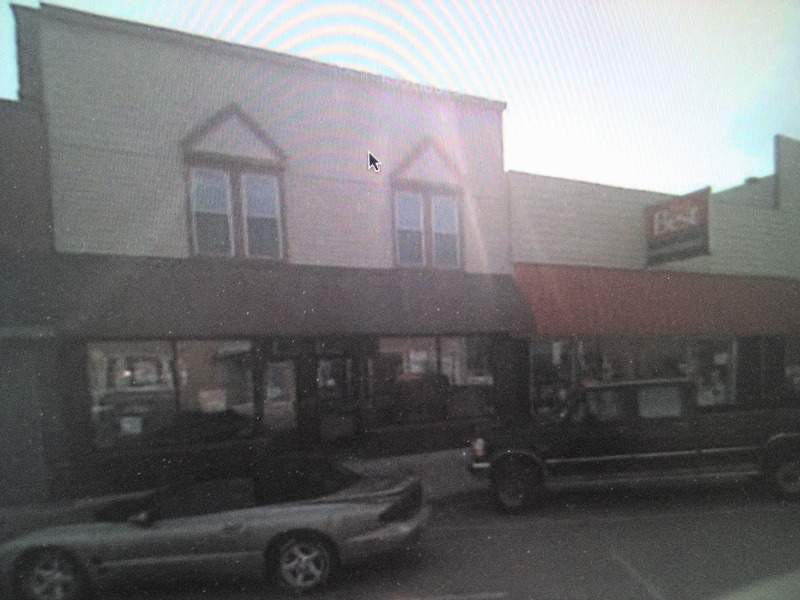 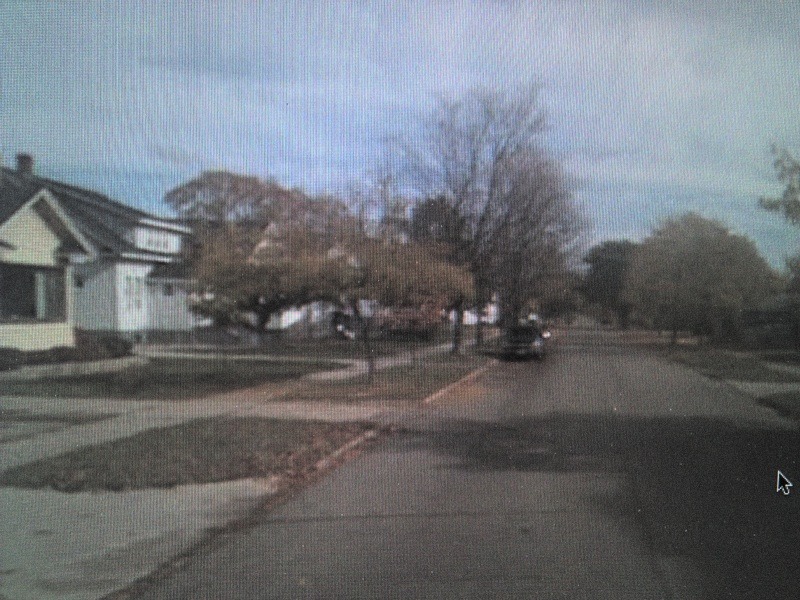 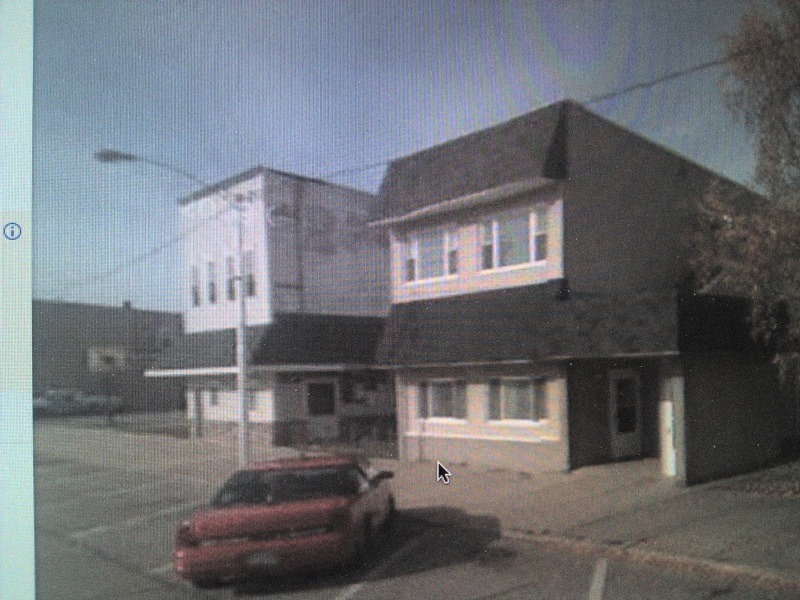 My friend Todd had a friend named Chris. (I think his name was Chris.) Chris was a high school dropout who was trying to get back into high school and graduate. He seemed quiet. His arms and legs were covered with tattoos he and his friends had done with needles and ink. One sort of looked like a flower, but none of the others really looked like anything. He looked like he'd been absently doodled upon, everywhere. He and his girlfriend—she an emancipated teenager in her senior year—lived together in an apartment on Delta Avenue. It might be this one. I don't remember. 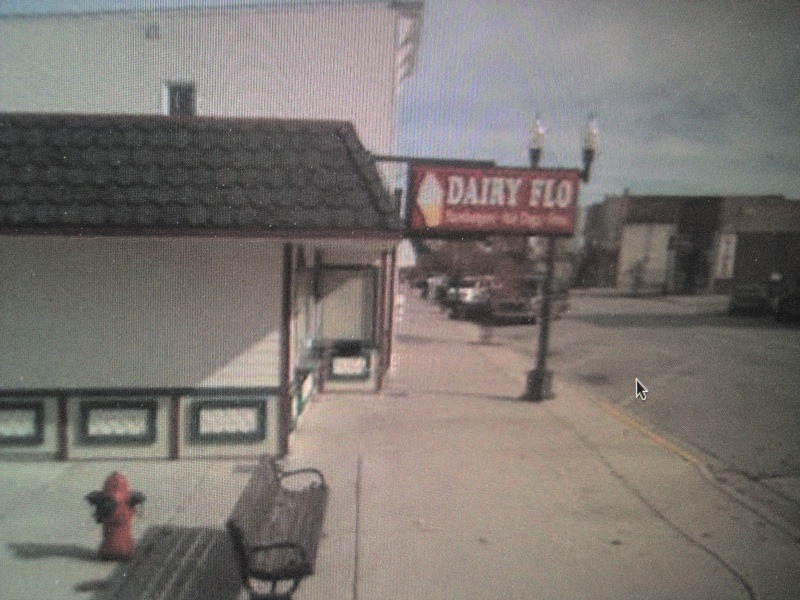 You could get Green River soda with your cheeseburger and fries at the Dairy Flo. One time, a couple of skater friends and I were there eating, and a couple of kids who said they were from Chicago and visiting relatives came in and told us they were in a street gang. They also implied that they were cocaine dealers. My friend Chris had a mohawk, and they asked him if he knew about a gang called the TAB ("Those American Boys"). They said a few days earlier they had gotten into a fight with a couple of members of TAB at a mall. I'm pretty sure they thought we believed them. We didn't. 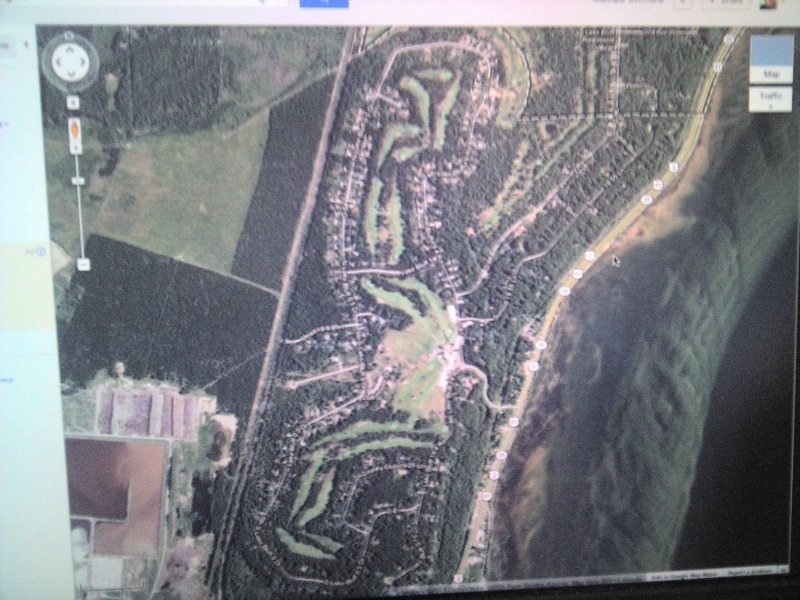 This is the Lake Bluff. We lived there. My folks still do. It's a residential neighborhood that coexists mostly peacefully with a golf course. Of most of the streets and the paths between holes, there are trails where the kids rode their bikes and avoided adult supervision. When we skipped school, we'd usually just hide out on the trails. We'd get into age-appropriate trouble: preteens would sneak cigarettes and dirty magazines, teens would get high and make out and fight. When the age groups met, each trying to get into their own age-appropriate kinds of trouble, things could get confused and difficult. It was best to simply acknowledge each other and move on without attempting to communicate across the age divide. 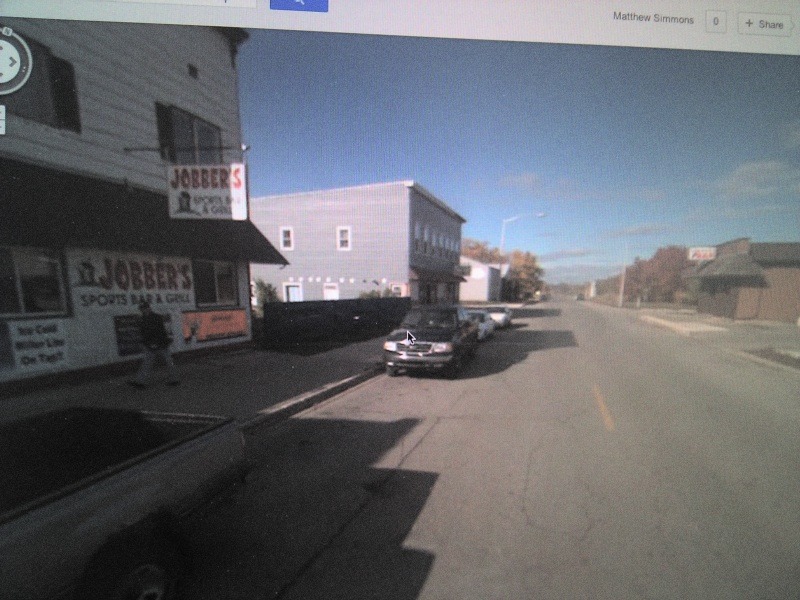 If you get 86ed from a bar in Escanaba's North Town, you can walk half a block and find another. 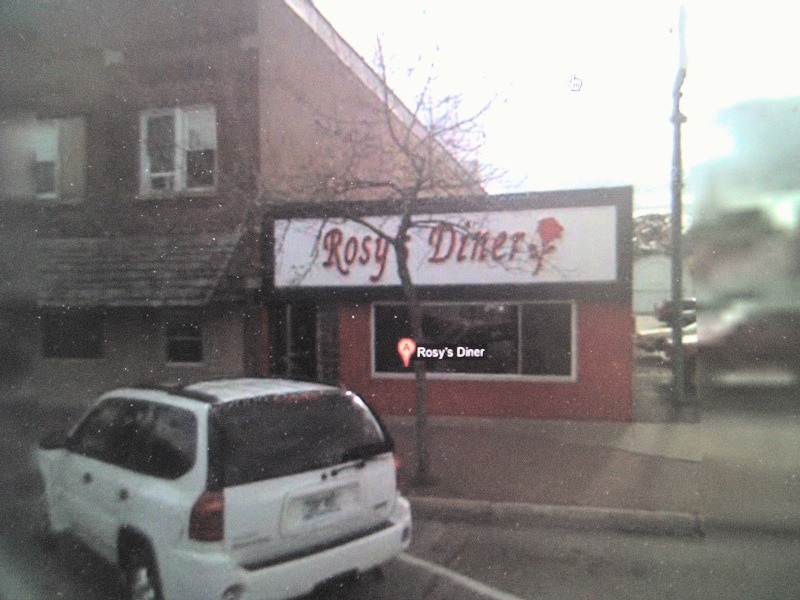 Rosy's Diner used to be bright yellow. When it was bright yellow it was called Tommy's Diner. Tommy was the guy at the stove. Is Rosy his daughter? Did she take over when he retired? Is Rosy the woman who used to sit at the register? Did Tommy die? It's been 22 years since I lived there. Tommy must have died by now. We might be getting closer to Rosy's death. What color will the diner be next? 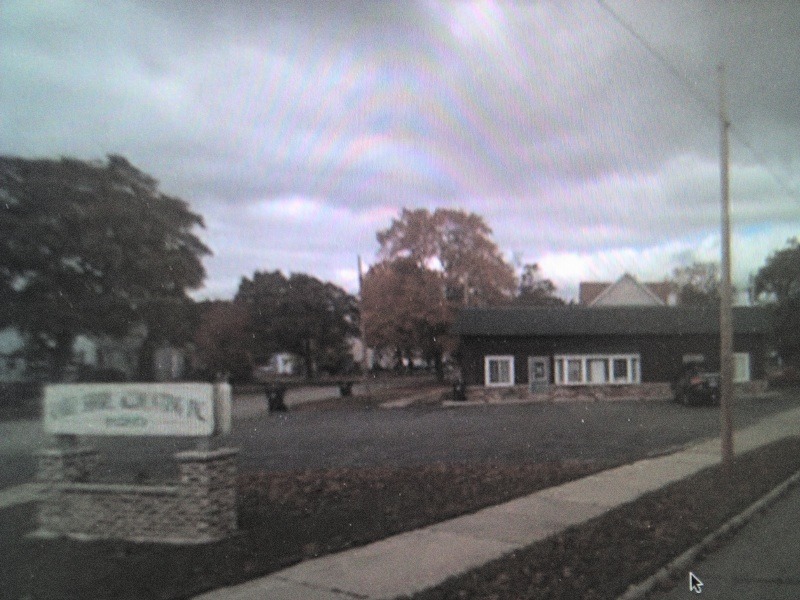 The parking lot of this once-chiropractor's office was a place where a lot of us would gather to skateboard. If you go to EscanabaSucks.com, you can check through the links at the top for Sk8spots, and then look through the Retired to see another photo of The Chiro. It's also worth looking through the Pics section for images from the 80s and 90s. Also, in the Interviews tab, you can read interviews with Todd Gayeff, Chris Wallace, and Jeffrey Woolford, three of the guys I used to skate with. Chris, Todd, Andy and I were all from Gladstone, but during the high school teacher's strikes in 89 and 90 or 90 and 91, we would take the Delta Area Transit Authority (DATA) bus to Escanaba to skate at the Chiro while the Escanaba High School kids were in class.