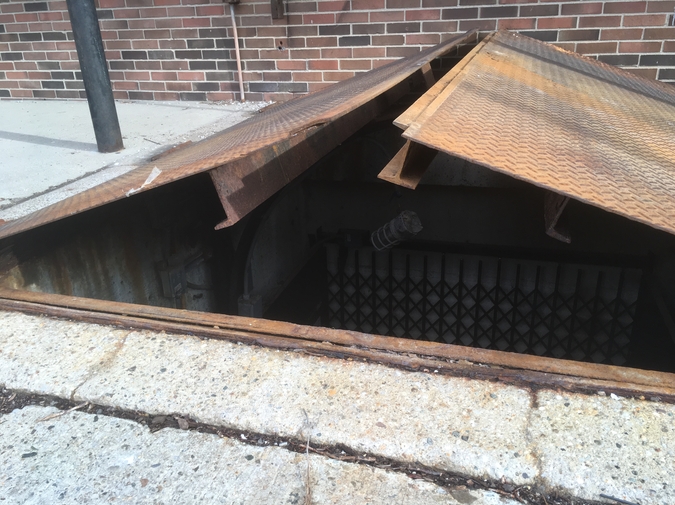 It starts like this: Hirsch leans over the sandwich board at the P&S Lunch just after the rush and feels faint.  A little touch of the queezywheezies, says Pinskey. Lie down for a little, says Sturgis.  Hirsch lies down for a little, on a cot in the back, within a noseful of turned cheese.  The fridge is out and he gets this noseful, it's all he needs.

Later, around eight, he gets up and feels fine, like nothing is wrong, except for a beat or two he can't get his bearings.  The place is dark, nothing but the fridge lights on, and he pieces things together and soon he knows where he is.  Imagine, he thinks, the fridge is out and the lights still work, can you beat that?  He gets up, stretches, yawns.  Pinskey and Sturgis are gone, and Hirsch uses the key they left for him.  I have my own key, Hirsch thinks, locking up.

The next morning, he gets into work and Pinskey and Sturgis, they give him a look like you wouldn't believe.  Hirsch can't figure.  What's going on? he says.  Pinskey and Sturgis, they keep looking and looking, like they've never seen anything like it.  Hirsch guesses he must have said something in his sleep the day before.  He does that sometimes, says stupid things in his sleep.  Maybe he drooled and they're looking at him like they can't have someone making sandwiches who drools in his sleep.  Who knows?

What's on your face? Sturgis says, at last.

Hirsch doesn't know how to answer.

Your face.  What'd you do to your face?  (This time it's Pinskey asking.)

They go back-and-forth in this way until Sturgis drags Hirsch to a mirror and says, Your face, your face, look at your face!

Hirsch looks at himself and sees, to his horror, a thick growth of hair.  Overnight, just like that, he gets this thick face hair and he thinks, This is not good.  He thinks, This is the end for me.  He doesn't know what to make of the whole business.

We can't have him out there making sandwiches looking like that, Sturgis says, the voice of reason.

Pinskey agrees, but what is there to do?

A specialist, Sturgis suggests.  We'll take him to a specialist.

Hirsch rubs his hands across his new growth.  He looks like something in a zoo and here he is, coming to work to make sandwiches.  What they must have thought when he came in!

Tell him, Sturgis yells to Pinskey.  Tell him, he won't believe it.  Tell him.

Pinskey tells him and Felb can't believe it.  Specialist or no, he can't believe such a case would fall into his lap.  Out of the sky and right into my lap, he thinks.

Yes, Pinskey assures him over the phone.  Like a monkey, he looks.

Hirsch is still in the mirror, staring, disbelieving, his mind racing for answers.

Soon, Felb is in the back room with them announcing, This is one for the journals!  He looks at Hirsch.  It's true! he cries.  I've read about such cases, but they're rare, very rare.  To be able to see such a thing, it's a blessing.

Felb has a quick look and tells Hirsch not to worry.  You wouldn't believe the things medical science can do these days, he says.  We're on a roll.  Ever since penicillin, we're on a roll.

Hirsch looks at this Felb, this specialist, and wonders at the sudden turn his life has taken.  One minute, fine, nice job, nice life, nice face.  Next thing he knows, poof, a face full of hair and his life is turned upside down and things, probably, will never again be the same.

Felb takes Hirsch aside.  It's not as bad as it looks, he says.  What you have is treatable, let me begin by saying that.

Hirsch touches his face.  He can't stop touching his face.

Felb looks to Pinskey and Sturgis.  A good thing you called when you did, he says.  Leave something like this for a few days and who knows what might happen?

Well, Sturgis says, he can't very well be out there making sandwiches with a face like that.

You're telling me, Felb says.  The three men laugh, imagining Hirsch making sandwiches with a face full of hair.

Sturgis suggests they call the newspaper.   The publicity from this thing will put the P&S Lunch on the map, he says.

We're already on the map, Pinskey says.  Plus, what kind of publicity is that?  Saying you got a guy makes sandwiches with a face full of hair?  What kind of nonsense?

Hirsch is alone in this thing, he's realizing.  What he sees in the mirror is disturbing.  Under his lip, down around his cheekbones, up at his temples, everywhere there was once just face there is now also hair.  It is as though someone put glue on his face and tipped him over forward onto the rug.  This is the lint and the dirt and the carpet all bunched up on his face, is what he is thinking.  This is what I look like now.  This is my face.

No newspapers,  Felb insists, back on the newspaper thing.  Nothing in this for the newspapers until we operate, he says.  We operate, we're successful, we hit the front pages, I guarantee you.

When he wakes Hirsch is unable to touch his face.  His hands are strapped, he's too weak to move.  He can't bear the not knowing, the not seeing, so he twists his face, crinkles his nose, brushes his cheeks against his shoulders, against his pillow.  He gets back nothing, no way to tell if he's returned to normal.  No way to tell what the rest of his life will be like.

Felb returns with a mirror.  We got it all, he says to Hirsch.  Looks like we got all of it.

Looks that way to Hirsch, too.

I'm afraid, though, I have some bad news, Felb starts in.  This condition you're now in, it's only temporary.

What temporary? Hirsch wants to know.

Felb explains how the growth could return.  Perhaps even on a daily basis.  This is the nature of the beast, he explains.  This is what happens.

Hirsch can't accept that this is what happens.  He comes to work every day, makes a nice sandwich, no skimping, no charging for extra tomatoes for his regulars.  This business with the hair on his face is not what should happen.

Felb explains how the condition is outwardly treatable but that the growth has spread beyond the bounds of medical sciences.  Not even medical science on a roll can handle this one, he says.  Hair can burst from the pores of your face at any time.  This is what you'll live with from now on.

Sturgis walks in, he's been waiting in the hallway.  Good, he says.  The specialist did a nice job.  He says Pinskey wanted to come, said to say he wanted to come, but someone had to look after the P&S Lunch.

Hirsch doesn't say how his problems are only starting, how this could go on every day, how he could be leaning over the sandwich board and, poof, hair all over the place and who knows what the customers will think?

When Sturgis leaves to relieve Pinskey, Felb takes the time to counsel his patient.  It's not as bad as it sounds, Felb says.

Hirsch wishes Felb would just tell him all of it at once, not just a little here and a little there whenever he feels like it.  Tell me the whole thing! Hirsch yells.  Tell me how hair busting out all over my face whenever it wants is not as bad as it sounds!  He is pretty excited for someone still sedated.

Felb produces a small surgical instrument, a sharp blade with a handle.  Also, a jar of some kind of lotion, a cream or something.  It's not as bad as it sounds, he says, because you'll learn how to use these.  He explains that it's a type of home surgery.  He shows Hirsch how to rub in the lotion and remove the hair with the blade, gliding it slowly across his face with even strokes.  Wherever there is hair, you rub this lotion, he says.  Wherever there is lotion, you rub this blade.

Hirsch picks up the mirror and puts his face back into it.  He's not saying anything.

And so this is it, the beginning of Hirsch's troubles.

Turns out Hirsch's hair bursts out in something of a pattern.  It seems it's only going to do this thing while he sleeps, and in the morning before work he removes the night's growth with Felb's blade and nobody notices.  This business with the daily home surgery, even Pinskey and Sturgis don't know.

Felb's in all the journals, on all the talk shows, someone's even interested in doing a play based on his life.  Imagine, Hirsch thinks.  Me with hair inside my cheeks waiting to burst out onto my face, and him, Felb, the specialist, with a Broadway show, a musical probably.  My troubles choreographed for the world, can you beat that?  Nobody knows about the daily bursts, though, so at least there's that.  Felb says that part of it is between them, doctor and patient.  A sacred trust, he says.  Hirsch couldn't take it if anybody knew about the way things really are.

And yet despite the regularity of his condition, despite the predictable pattern, Hirsch every day carries a deep, black fear that the pattern will change, that suddenly hair will burst out, poof, all over his face.  He thinks while doing a tuna melt or a Genoa and Swiss he'll grow a puff of hair.  He thinks he'll shock the customers from the P&S Lunch and into the Hale & Hearty next door, like they even need the business.  Or maybe he'll be buying shoes and out of nowhere start to sprout hair.  He is ready at all times for his face to explode into hair.  Everywhere he goes he lives with this fear, lives with it so that it has become a part of him, a growth, almost like the hair itself.  He walks around like he's a Stephen King book waiting to happen, and this is what gets him.

Daniel Paisner's most recent novel, A Single Happened Thing (Relegation Books), was named an Indies Finalist as best book of the year (literary fiction) by the editors of Foreword Reviews.  His previous novel, Mourning Wood, and a non-fiction account of the aftermath of the historic home run race of 1998 - The Ball: Mark McGwire's 70th Home Run Ball and the Marketing of the American Dream - will be reissued in January. Follow him on the twitter: @DanielPaisner