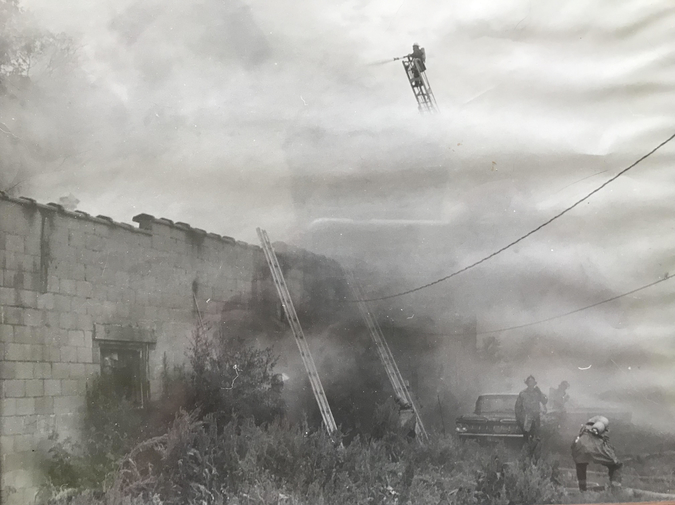 The first time I went rock climbing, I lasted 30 minutes. My forearms ballooned then stiffened. My hands trembled, out of control. These were muscles I rarely used and never exercised. Afterwards, the simplest of tasks—opening a bag, unlocking a door—required tremendous focus and effort. “You have Grandpa hands,” my brother said, as I struggled to tie my shoelaces. “Sometimes,” he added, observing his own hands, “I get scared I have early onset Parkinson’s.”

Growing up, my Grandpa would say, “Alright, let’s see your handshake.” I’d roll my shoulders and we’d clasp hands. I squeezed as hard as I could. I knew this was a test. I realize now I tried to hurt him during these tests. That was how I’d pass.

Our time together was a series of tests.

In climbing, there are many types of grips. There are grapes, crimps, slopes, pyramids, pinches. Inexperienced climbers, such as myself, tend to rely on hand grips more than footholds or technique.

Hand tremors are an early sign of Parkinson’s disease, a disorder that infiltrates and deteriorates the central nervous system affecting, primarily, the motor system.

When my Mom called to tell me Grandpa was diagnosed with Parkinson’s, I didn’t know what to say. I didn’t even know what it was. I sat down at the kitchen table and googled if Parkinson’s was hereditary. It can be.

My relationship with my Grandpa was that of foreman and employee. He always had jobs for me and my brother.

As a child, I operated machines twice my weight: rototiller, snowblower, woodsplitter. Once, while I wrangled the rototiller - a machine that breaks down hard top soil and turns up fresh, rich soil - across a vegetable patch, he shouted over the engine, “Let the machine do the work.” There is wisdom in this, in assigning labor to the machine rather than one’s body, in acknowledging weakness.

Proper technique and use of climbing equipment is crucial to safely summit a route.

I didn’t mind the work. Grandpa always paid us fairly. But he frightened me. Not in a violent way. Something other than my body was vulnerable. Pride. I was in his arena and knew it.

I learned to tread lightly and move quickly. Without looking up from the task before him, Grandpa bellowed like a foghorn, “Connor: needle nose pliers.” I knew nothing of tools and was too scared to ask which one. I made my best guess and prayed I hadn’t embarrassed myself. Still, I had no motivation to learn the names of tools, how to maintain machines, and so on. I had no incentive to succeed, only the fear of failure.

Grandpa told me to always lift with my knees, never my back.

Grandpa’s first job was working on a dairy farm. Frost forces rocks and stones to surface every spring in New England. Before farm work can begin, the fields have to be cleared. Grandpa had back surgery at the age of 16.

In Nebraska, you can work the earth all day and rarely find a rock.

Top rope requires two people: the climber and the belayer. The ropes are set up in a pulley system and the belayer supports the climber by pulling the rope taut through a clip device, the size and shape of a sliced avocado, to reduce slack and mitigate any falls to no more than a few feet.

The instructor didn’t tell me what to do when I got to the top. Arms and breath heavy, I clung to the wall, terrified. “Let go,” she cooed.

There are two types of wood: hard and soft. Hardwood is slow growing, making it dense and dark. Softwood climbs quickly and easily ignites. Ash and oak are hard and burn steady. Cedar is soft and scented, ideal kindling.

Every fall, we split felled trees for the winter to come. And every spring, we tilled the land, upturning soil rich with detritus. The dirt turned up pillowy and thick, like brown sugar.

Grandpa was always very keen on safety and preparedness. When he taught me how to operate a machine, the first lessons were not how to actually use it, but everything that could go wrong and what to do if it did.

If a rototiller plowing the earth began turning up rocks: let go and the engine will die.

If the wood is poorly aligned on the woodsplitter, do not try to adjust it last minute: let go and try again.

The belayer’s dominant hand should never let go of the rope.

There was no one I’d rather belay my first time, and no one I was more nervous to belay, than my brother. His well-being was in my hands, my dominant hand. My hands didn’t know the movements, not like they do now. I gawked skyward as I watched his every movement. My eyes, like my hands, never let go. For once, my neck hurt more than my forearms.

“The descent beckons / as the ascent beckoned,” writes William Carlos Williams. The poem reads like a waterfall. Leaves me staggered, breathless, under a torrent of memory.

Descending is more difficult than ascending, more conducive to injury.

In 1956, a barn was burning at Dana Dairy Farms, Grandpa’s first employer. Grandpa forgot his gloves. This was his first major fire and he burned his hands. He was 16 then; he never made that same mistake.

The most common cause of fires is human error.

Grandpa visited my elementary school to instruct our classroom on fire safety. I felt proud and, in the days leading up to his visit, openly bragged, to teachers and classmates, about the number of lives he saved during 9/11. I wrote an essay about his heroism.

I lied. I don’t know why I lied. But I knew my lies commanded a hushed respect. I knew it was a better story than removing debris from Ground Zero. As bard to his fight with terror and fire and finance, I shared in his bravery.

“What,” he asked the room of fourth graders, “do you check for before opening a door?” My hand bolted up and he called on me. “Look for smoke,” I said with confidence. He shook his head. “Smoke rises. The first thing you do is check the door handle to see if it’s hot. If it’s warm you choose another exit.”

My hands are buttery.

Climbing introduces a new topography to my palms. Friction blooms a chain of volcanic islands that rise, bleed, and callus.

Fire seems erratic, but it is not.

Fire climbs. Fire feasts on oxygen. Fire will ascend a hill in no time. It will not, however, race downhill.

The night before Grandpa’s funeral, I edited Mom’s eulogy. It was the first time I cried. Words do that to me. Especially my mother’s.

That night, thunder and lightning and poetry woke me. I reached for my notebook, but could not grasp the words. The lines, written inside my eyelids, had disappeared. The poem was for the dead, not the living. I had little to say, but so much I wanted to ask.

Chalk is a drying agent used to improve grip.

I love chalk. I like it under my nails, crusted around my cuticles, dusted over my bicep. I like to wipe my forehead and feel the oils thicken between my fingers. I wear black to show the world I went climbing.

At the funeral, I read a letter Grandpa’s father wrote to him. The letter begins, “Dear Son, Today is your 21st birthday and so you become a man.” At the time, Grandpa was stationed at an Air Force base in Greenland known as “The Rock.”

A black and white photograph above Grandpa’s sickbed showed a firefighter perched on the highest rung of a ladder, above a thick cloud of smoke that obscures the rest of the ladder and much of the photograph. Smoke softens the facade of the brick building and makes it appear fragile. It threatens to crumble, not from age, but heat. And there, at the summit, is Grandpa, fighting to save the building’s integrity.

As we lined up to receive the flag-covered coffin, bagpipes split the summer air. The sun tunneled through my dark suit. But something else made me sweat. This was my final task for Grandpa. He was a heavy man. Was I strong enough?

The last year of his life, Grandpa’s hands never stopped shaking. He was shaking hands with death, testing its grip.

On his sickbed, we still shook hands. Shaking hands was easier than hugging, always had been. His once-hammy fists were now deeply bruised, deteriorated to the point that you could see piano strings run down to his knuckles. Now we shook hands, not as a test, but to steady each other.

When deliberating how to best fight a fire, read the smoke. Flames tell you nothing.

Connor Goodwin can't stop. A writer and critic from Lincoln, Neb., Connor's writing has appeared in The Atlantic, High Country News, MEL, NPR, and elsewhere. Find him on twitter @condorgoodwing.