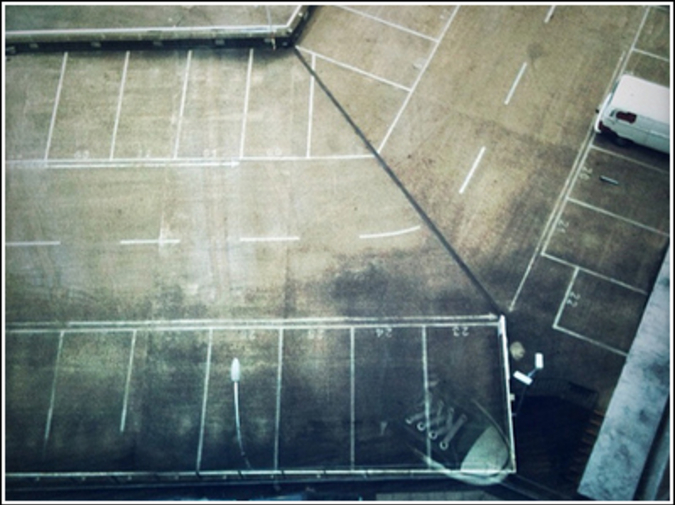 All these people. How did they do it? Well, many did not. Broke as eggs on sidewalks, sister. They were walking around in the street, everywhere, and I was there, watching it unfold. In their clothes, with their personalities like so many fish. People looking as sharp as weapons in holsters— I'm talking potential for protection or striking out in equal but opposite directions on their own. Minds in their bones, bones in their minds. Bones in the future and bone in the past, bones in clothes, with premonitions and shadows, fore and aft. Mid-morning, big engine sun banging on cement and metal, and all the littler engines in the streets and buildings, in the cars and bodies.

A blond girl squinted out the giant window of the 7-11, luckiest store in the world. She'd been connecting the dots with her car, one lucky star to the next, across the bright city. She wore a down coat. A girl roller bladed by the window in a bikini, a bright pink headband with plastic feathery fluff on it that made the blond girl feel the fur lining of the hood of the girl on the other side. Three round and haloed heads, counting the sun. The girl in the bikini rollerbladed back, did a spin in front of the window and then leaned on a parked car, sucking on a soda, contemplating the girl in the parka in the air-conditioned store. She felt the condensation on her big cup. She felt her hip on a headlight. Luck, or whatever luck is code for, is cold, unbalanced, and connected.

Sad girl in her mania. Sunny girl with her pop. Looking through glass as if it's a mirror. With any luck.

At the park a man says, "It's hard to watch that crippled dog." The woman explains that it's not a dog; it's a really big puppy. He says, "Oh, that makes it better," but she can't read his tone.

The puppy, mouthy, galumphs around with bones that bow and bulge. Then the puppy does something, something really familiar with his face, one of those things your own dog does, that thing with their face when they look at you with more desire than you can possibly imagine having, no matter how much desire you know you have, and also with absolute conviction that you can fulfill that desire, if only you will choose to do so, making you think, wait a sec, can I really do what I want? The man squints at the puppy and thinks, It's a kind of assault, to bring something like that to a park, when everyone... whatever, he can't put his finger on it.

He says to the woman, "It's not yours, is it?" so then the woman wonders, did she not look cruel enough for whatever he suspected, a Frankenstein? For now she is going to pretend there is something wrong with her ears, or the wind.

There are at least a dozen dogs in the park, and several clumps of owners gathered under each of several trees that dot the field like overwrought buttons that don't button anything.

What if the problem with the puppy wasn't its legs so much as it didn't have its face? He suddenly thinks that might be what's pissing him off, and the woman looks so squishy there, suddenly, compared to her bony animal.

The two of them stand under a tree, watching the dogs. They can't figure out how to stop standing next to each other. The tree makes a shadow around them that looks like a big dog, sitting. One of the dogs out there belongs to the man. It could be any of them, they are all so healthy. One dog is a collie, zooming around the giant puppy in tight circles as the puppy flops from one side to the other to keep track. Is this alive enough?

The woman looks around at the people, standing in clumps, talking about their dogs, narrating what they think their dogs mean.

"Look," someone is saying about some other dog. "He's like, 'take that, cowboy!'"

The man no longer seems to be waiting for her to answer, his face drawing a blank. In fact, compared to the puppy there's nothing going on.

But in the woman's mind, he'd imagined her looking for approval from the dog people at the park. In her mind, he imagined she wanted to be congratulated on her charity, and he imagined her dreading people like him, who would start off uneasy and increasingly roil as the puppy continued to play, miraculously, as if past death, as if he'd never known whatever it was he'd known.

I loved her, but the day before the storm she kept coming into my room and looking at me. She knows what gets on my nerves. That, along with her cats, my dog, everyone. The plants down the street, the bundles of garbage that float by our windows and roll along the sidewalks, snowballing like human souls. We knew all along about the storm, about it coming, and this is why we live with our whiskers twitching as if we'll ever sense anything that will help us.


Ben and Becky Have a Word

That day, they were doing something with their lives, blowing off work in rental kayaks. Chirping, lapping, the bridge in the distance like a fake frown. The city lagged behind. Below, they still had to rely on their imaginations for fish. Ben was telling Becky reify jokes, which he stubbornly pronounced with a long "e" so that it meant something like, "to make something like something again."

What's all suffix and prefix and rootless? Reify.

What's all brains and no brawn? Reify.

What's one step away from a push-me-pull-you? What cancels out its application? What's a double negative in action?

She didn't want to know any of the answers. They paddled onward, into the awkward sentence. Soon they felt the boat rise.

In a pause for background, Becky thought of a recent moments on the internet with Singleton Copey's Watson and the Shark, inspired by an event that took place in Havana, Cuba, in 1749. Fourteen-year-old Brook Watson, an orphan serving as a crew member on a trading ship, was attacked by a shark while swimming alone in the harbor. His shipmates, who had been waiting on board to escort their captain ashore, launched a valiant rescue effort. But it seemed from the painting that the effort was in vain. As a child she'd thought that boy was a girl with beautiful flowing blond hair, arching before the shark's wide mouth in the waves, the shark's tail so distant it might have been another shark. Two men reached for her in matching white shirts. A woman with beautiful flowing brown hair lunged at the shark with a spear. A black man stood behind the woman with the spear, compositionally parallel to the girl in the water. He was in his own world. He was above the fray. His expression was ambiguous. He was both interested and feeling something. People in the boat were exhibiting fear, sadness, bravery, but one thing you don't always think of is joining the victim.

Now, Becky had always loved a good internet citation, because it made her feel like it was a free country as she researched, cutting and pasting gibberish onto her own document as if it meant anything. It might be pathetic, but this, she felt, is how you make something your own. And that's when she had the idea about reify. While Ben was trying to come up with another set-up, she got down to her skivvies and slipped into the water. This surprised him so much that he dropped his paddle into the water. A shark came by and ate it in one fell swoop. Ben screamed something about being up a creek, and that's when she called him the enemy of expression.

Lucy Corin is the author of the short story collection The Entire Predicament (Tin House) and the novel Everyday Psychokillers: A History for Girls (FC2).