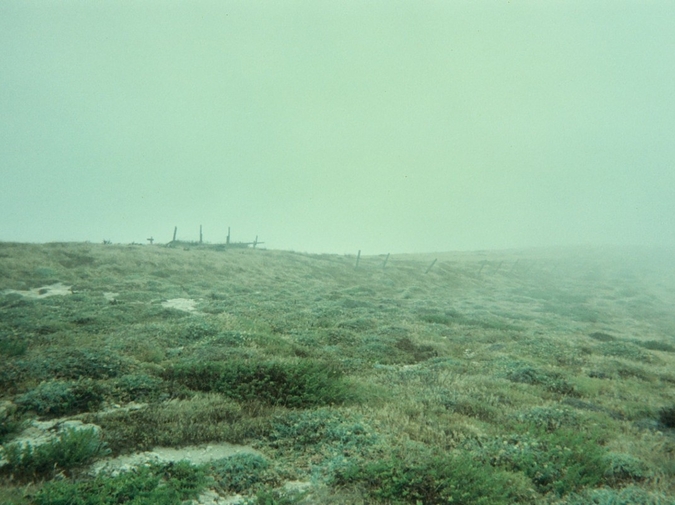 The creek under the creek. Or the worthwhile hours of line and trace and line. A bridge built in 1973, a glacier sometime before. You must forgive the tilting roof, side-eye guttering. The drive, two windowed. But hand the page over—it’s a slow horse. There’s a particular, yes, mid-way. A Buffalo Heart moraine. Slew of rushes here, say, the road between the shoulders. Or chapter and till. Meander, an unfold. Flush the chatter, the starling, the wide eyed vireo. Our hands to our eyes again.

Seven blocks from tanks and skeletons, the gulls heard again. A swelling in the air. The old cannery, the wharf where tuna, halibut—bellies fully silver opened  it—weighed. Everything I stole, I hid under my bed, and this included the goose feathers, the abalone shards. A chart of rocks. A small unnamable pin. A perpetual spin of anchovy, so I lay on my back on the marble flooring. When we found the dead whale, we couldn’t recover the eye of it, and because I hadn’t lost my mother, I managed to survive. When the researches hauled out their tinny boats, we worried about the tail. Something about a bed, yes. Even the seafloor and its arms. How I never traveled on that or any lost boat. But this is called the stern, and here is the rope I never knew what to call. Depth means the space between, incites.

When my grandfather died, we were placed under the protection of the Benevolent Order of the Elks. We gathered our eleventh hours and chimes, our blueprints and appropriate handsaws. The Elks accumulated, antlers decked out, local lawyers and car salesmen now endowed with hooves, a certain plodding onward. We were asked to the ceremony. We were told to bring our own candles. They said he passed into a dark shroud, brother Al, and we nodded, appreciative of that hackneyed colloquial, a horn next to the deli, strange hats perched between the ears. The Elks brought a flag, pretended they knew us, a herd of sad, offered up their podium. Said he was good at collecting loose change, a skill nearly insurmountable for those without thumbs. They stared out, bovine: our room too warm; our ceiling, lowed, made for smaller creatures. Our utensils and their polite indifference. Without speaking, our animals applauded. We left licking the plates clean.

My father sells
walls, my brother

failed to swallow
the lake, the lake

feels bad about his
friend who

lawns or flamingos
everywhere, a slicker

for the belly
of rain.

Kelly Clare lives, writes, and makes pie in the midwest.