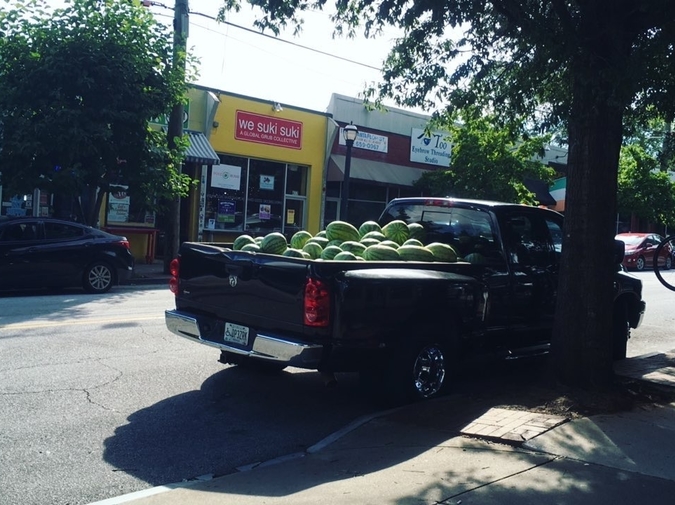 The gas station sat on the corner like a tasteless cheeseburger. Willy leaned on the counter. He wore the customary attendant's outfit with a WILLY patch just above the right breast pocket.

A bird flew past the station's spotted front glass window and landed on pump number three. It moved more in this one random bird motion than Willy had moved in four hours.

And then it flew away.

It was odd that a bird would land on top of a gasoline pump, Willy thought. Willy had never seen such an occurrence. He had put in twelve years for the company.

There was $42.38 in the cash register. The sun was out. Behind Willy's back, the cigarettes grew stale in their boxes.

I once worked as a groundskeeper on a golf course.

One of my co-workers was a large, round, ex-football-playing bearded man.

His name was Bob.

As Bob took in air mixing concrete in a wheelbarrow.

He told our crew this story.

About his California homestead:

Glitter would rain down the painted, mural waterfall of Bear Cave.

Hidden in a barren landscape of a California without windmills.

Chickens, pigeons, and a solitary horse lived beside us there.

Eating what they could.

A cantina was set up behind the house for drinking and smoking.

When the mountains loomed as far off shadows.

Bearing down on the place.

As most places around there are.

That morning Bob had pinned a rookie by the neck to the break room wall.

Bursting from his chair as if from a three-point stance.

Bob added Quikrete to the wheelbarrow.

Then our crew got back to mowing the country club grass.

Somewhere else in America.

The American Dust and Leaf Company man stopped blowing dust and looked around.

No, the city is not on fire.

He picked his dust blower up from the dust and continued to blow the dust.

This time of year, you could never tell.

He blamed the sinus problems that plagued him on the city’s 5,000 ft. altitude and not on the dust that blew across the wide expanse like a particulate sail.

If I could just clear my nostrils, I could smell the smoke beforehand, he thought.

A giant wall of airborne micro-particles swept back on him like a broken mast.

If we weren’t so high up.

The sirens came blasting his way.

The fire truck almost slammed into him.

A fireman jumped down.

The American Dust and Leaf Company man turned off the dust blower and stared at the fireman, unable to smell a thing.

“We’ve had calls from all over the city,” said the fireman. “We thought that with all this smoke in the air, it must be one helluva fire. We didn’t know you were over here, blowing on the dust.”

The AD&LC man squinted through the haze.

The firemen raced away.

The American Dust and Leaf Company man paused to look around.

Then he picked up his dust blower and got back to blowing some dust.

She brought roses home from work and cut them and trimmed them.

Later, she put the roses in a glass vase with water to perk them up. After the roses had awoken, she plucked the best ones from the vase and cut off their heads.

Tonight, as we sit on our stoop, we watch the traffic zip by our townhouse apartment. The helicopters circle overhead. The neighbors yell. A train rolls by on the northbound tracks.

On our walkway, like a little pink ghost of Marie Antoinette, lies the discarded head of beauty fading.

He chews his gum like a sad, lonely night. He doesn’t have a television, so he chews gum instead.

Bram Riddlebarger is the author of two novels, Golden Rod and Earplugs. He lives in Athens, Ohio.