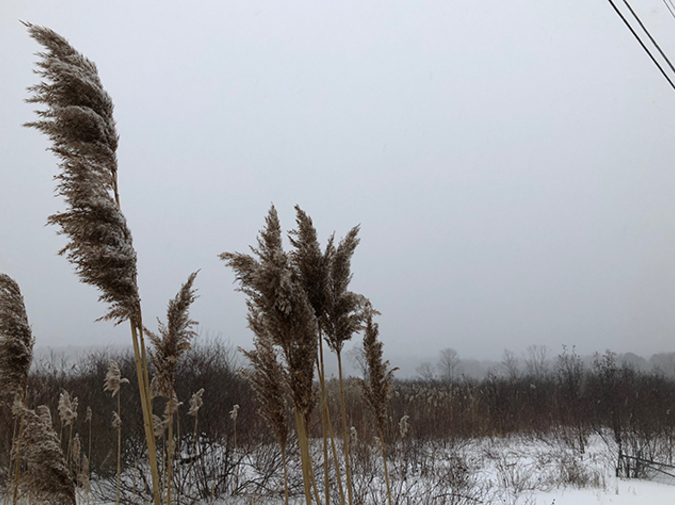 Visiting Kennedy Space Center on the Eve of My Divorce

I’ve mooned away my marriage,
grounded it, ripped the fuselage
in two, or is the better metaphor
to say I heard the countdown go
from ten to zero and didn’t even
try to stop my wife from breaking
the gravity of disaster planet me?
No need to stick around and sulk
while she’s packing up her stuff,
so I’ve driven to Cape Canaveral
for the weekend, where at least
it’s clear what’s meant to vanish
and return, however long it takes.
Poised impossibly above me now
and bolted to the earth, Atlantis,
retired orbiter, knocks me heady
with its nosedive size and weight.
In footage scrolling up the wall,
no explosions, only splashdowns,
a crew of moon-faced astronauts
descending back into their lives.
I, too, feel afloat, like an O-ring
blown to ocean-salted bits. How
does anyone survive the massive
force of this, encompassed neatly
by a launch pad’s buried blast pit
aglow with dying fire? It’s almost
night, so I’m headed home soon.
My ex-wife should be nearly done
unmingling her books from mine.
We’ve spent a month not speaking,
like last week, our son and daughter
playing in the dirt, and the two of us
gazing at separate wedges of the sky.
Sitting vacuum-sealed in our lack of
conversation, I wanted something
to crack that awkward airlock open
and let the pressure out between us.
But we held it in all night, refusing,
until one of us decided it was time
to cart the kids to bed, so we sat
with them together, singing again
a few curious lines about the stars.

I don’t believe the living meet the dead
in the bedlam of illness, in the padded

gymnasium of the ward, but my wife
does. She talks to my father, his brief

stay in this place enough to ghost him
back to visit. He wants to play a game,

she says. I nod and take a seat beside
the cage-grate door, watching A. glide

across the ball court, no ball to defend
against my father. I'm trying to pretend

we’ve landed on an episode of Star Trek,
his favorite show. We’re in the holodeck’s

projection of a padlocked gym, no view
of space, asylum that we hurtle through.

Where is My Mind, Sound of Madness, Crazy Daisy,
Hurt, Loser, Horse-Sized Pills, Shiny Happy People,
Basket Case, Under Pressure, My Dad's Gone Crazy,
Crazy Since the 80s, In Any Tongue, Achilles Heel,

I'm Not Alright, I Want to Be Sedated, Mad World,
Crazy Train, Eyes of the Insane, Young and Crazy,
Fire and Rain, Thorazine Shuffle, Ship of Fools,
Wild for the Night, Way Too Far, Oh You Crazy

Solitaire, Elsewhere, When the Sun Goes Down,
How Bizarre, How Come You're Not Here, Crazy,
Gone, Shine on You Crazy Diamond, Damaged I

In the Year of Infinite Sadness

My pain was so special, I dressed like a Transylvanian
widow in a silent film. I gave up
the religions of soccer, folk rock, and cologne,
and only shopped at Hot Topic.

Dead father, mother sunk in a sorrow hole,
still, I envied my classmate who fired a .22 pistol
into his jaw but lived. If I was a mannequin
propped against a locker—

headphones in, bleak soundtrack—
he danced a striptease on the mortician’s table.
When he peeled back a flap of burnt skin
like a living skeleton

to impress us, our English teacher,
Mrs. K, removed her cancer wig
and silenced the room.
She loved Frankenstein, sucked persimmons

at her desk, and wore silk print dresses
billowing with peonies. Now it’s May in Florida,
breezy and bloom-dappled,
the stuff of tranquility. I swipe a dust rag

along a shelf in my toddler's closet,
where nostalgia saved up to retire. Yearbook,
Smashing Pumpkins T-shirt,
a C.D. containing my misery's opus,

a collage of grunge-rock I let bang against
my face, which, I'll admit, is still
like a cage door rusted shut. I thought
my suffering was ancient, and so deserved

heavy eyeliner. It impressed no one
but my mother, who suggested I go outside
for an hour of sunlight,
a touch of grass for my shadow to lie in.

Freedom? How’s this: a father teaching his son
how to blow stuff up in the back yard.
Black powder to blasting cap,

a red button
hooked to a wire
plunging into the dirt.

Dear god of homespun grenades,
please point this blast at the blackbirds
that perch and shit on the hood of my pickup.

I am tired of cleaning up
after you.

The boy pushes the button. Sod rains down,
leaving a divot deep enough
to bury a covey of quail. They don’t rise,

but remain in a safe house of wheat
beside a clutch of stunned eggs
ready to hatch,
the embryos unfolding
beneath burnt little helmets.

Chris Hayes has published poems in Beloit Poetry Journal, Bennington Review, The Gettysburg Review, and several other literary magazines. He has been the recipient of the Erskine J. Poetry Prize from Smartish Pace and the Oboh Poetry Prize from Boxcar Review. He lives and works in Tallahassee, Florida.