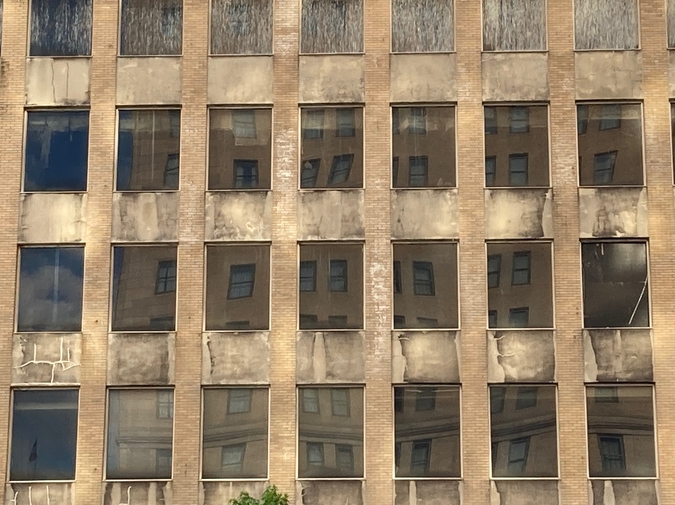 What I miss about not being a parent is not caring at all what happens. Maybe not caring overstates it. Nonparents care what happens in their lives and in the lives of others. I myself cared. But that caring, at least in my case, burned only at the coolish heat of interest, or curiosity. I wanted to know what’d happen in my life—sure I did. I couldn’t wait to watch it happen. But pre-fatherhood, I was suspended more or less perpetually in that state of watching, as if “Ben Nickol” were a character marching through humankind’s interminable film—a character who’d caught my attention for no grander a reason than he was me.

Oh, there you are, Ben Nickol. Over in the corner of the screen. What’re you up to today?

It was pretty chill, watching my life unfold like that. What’s more, I am such a character marching through humankind’s interminable film. (Duh. We all are.) I wasn’t suffering from delusions. What I miss now is the luxury of not suffering from delusions, or anyway not trafficking in them. I miss relaxing in the theater seating of my mind, popping Milk Duds, keeping an eye out for plot twists.

At age thirteen, two wiry hairs sprouted under my arms—that is, one under each arm. That twist was major. Likewise major were my first, frantic orgasms, the solo one and, too many years later, the assisted. I made sports teams, published stories. Milk Duds showered into my mouth. People did die, sadly—a grandfather in Montana being the first. Standing over my grandpa's open casket, the sheer unresponsiveness of a body, the unfathomable nounness of it, forever estranged from verbs, froze my goddamn feet to the floor. And yet, and yet, from the rear pew of my mind came a rude slurping as my straw probed the ice of a Pepsi. Little burp there, excuse me. Because hey—what could you do? Relatives died in this life. In this movie. Peoples’ feet got froze to the floor. That it was my feet this time was painful, but from my breezy remove, picking popcorn husks from my teeth, I could appreciate that Ben Nickol was just another human soul Going Through It, one of the hundred billion or so who had. He was a fleck on the screen, no more. If things went wrong for him, then it was also true that nothing would go more wrong for him than it’d gone for countless others. Everybody caught shrapnel. So long as you thought of life that way, things sailed merrily along.

Oh, those were the days.

These days, two pint-sized illiterate baboons scream through my house inflicting property damage. I don’t know how many teeth they have or don’t. Their sentences are poorly conjugated. Little bayous of urine proliferate on the bathroom floor, awaiting my clean socks, and should I live to be a thousand, I’ll never again not care what happens.

What’s to blame is their faces—their whole faces but in particular their eyes. And their hands. Their hands are equally to blame. Till I had kids of my own, four years ago, had a child never looked at me? Had one, in my presence, never twisted up his elfin paws? Of course they had! I’d seen children. They’d stared at me from passing shopping carts. I’d noted their anxious, knitting-and-knotting fingers.

Those had all been just kids, though. Kids of the world. Kids happened in this world. Their parents bought them tricycles and braces. Band-Aids got stuck to knees. I didn’t give a shit. Crack open a box of Jujyfruits for these previews. Kid in the shopping cart, you can stare at me all you want. Wring those sticky hands together. I’m some guy at Kroger. You’ll see ninety thousand of me before you die in your sleep sometime in the next century. I don’t matter to you. Someone get this kid some TruMoo Milk. Or don’t. I don’t care.

I floated up the aisle. I floated clear out of Kroger and out of life, settling back in my Cinemark chair.

Withdrawals like that were easy for me. They were automatic. Why wouldn’t they have been? Nothing held me back. Till one day my kid, my first kid, rolled his groggy infant face my direction. He wore a knit cap I couldn’t have spread onto my knuckles. His navel, still dangling cord, resembled some bizarre upper penis crimped shut by a clothespin. Lacking cohesion, his eyes roamed up, then down, then one up, the other down. They crossed, went walleyed. I understand now, of course, that my baby’s eyes were simply spidering me, casting filaments all over my body. When, synchronizing, they finally fixed me in their gaze, I realized I couldn’t move.

Because where would I go? Backwards? Out? To the recesses of a dark theater? Reclined in my lap, fingers contorting pudgily, was a boy who but for my hanky-panky wouldn’t have found himself Here. He wouldn’t have been somebody Going Through It (as Going Through It he certainly already was, having that morning been circumcised). In other words, were I to beat a retreat out of life in that moment—were I to throw up my hands, withdraw, and say, “All of this is just living. It’s only a movie. Whatever”—then my boy at that moment could’ve rightly replied, “Ok, then what the fuck, Dad? What the fuck? If everything’s just some movie, if it’s all whatever, then why’d you bring me Here?”

I moonwalk toward the door.

And hell, I couldn’t do that to him. He was my kid. I loved him.

What it does—what being a parent does—is it makes you responsible. Everybody always says that. “Oh, you’re starting a family? That’s a big responsibility.” But what those people mean when they say “responsibility” is that there’s endless shit you have to do. Changing diapers, saving money, losing sleep. And that’s not what I mean. That crap isn’t responsibility—that’s just tasks. Arduous tasks, to be sure, but finally it amounts to crank-turning. What I’m talking about is some damn responsibility. The day you become a dad, or mom, you become responsible not just for your kid (responsible in the custodial sense, meaning you drive him to school, but also and more profoundly in the culpable sense, meaning You Did This, You Caused Him)—but you become, consequently, responsible to your child as well. You’re to blame for his life, after all. Who but you should answer for his life, and for all that befalls him in it? Nobody but you, I’m afraid. You. And it’s in answering to our kids that we become, what’s more, responsible for all Big Mysteries they’ll face while treading earthly dust. We’ve presented them with these Mysteries, haven’t we? It’s on us to ensure that none they encounter prove unnavigable.

So just add that to your plate!

Oh, you sorry bastards. You low, wretched saps. You wanted to be just some daddies and mommies. Now what’ve you done?

If it’s any consolation, you’ll fail. You will. Ultimately, when the chips are down, our kids—all our kids—will find us in dereliction of our duties. More likely they won’t find us at all, being decades and thousands of miles down their paths of life, while we putter in vacant living rooms still incapable of addressing even their earliest wounds and confusions, like why a pet won’t come home, or why, wheezing as they are, it’s time to button our coats and drive through the night to a hospital. That’s if we’re even to be found anywhere period—if we haven’t, by our own vanishing, become yet another of the unremedied injuries we’ve caused them.

Is it a crime, subjecting our kids to all this? Putting them Through It? Let’s call that still another Big Mystery I won’t resolve for my boys. But should we label it a crime—parenthood, that is—then there’s at least no mystery as to who the culprits are. Nor is there, I might add, any real debate concerning just punishments. As with any criminal matter, an ethic of proportionality lights our way. The covetous, in olden times, lost eyes. The thieves hands. And a dad, should he deign to place a child upon the set of life’s movie, should if nothing else remain with his kid in the ripping torrent of that movie’s plot. What befalls one should befall the other. What harms and confounds must harm and confound them both. No escaping to any balcony seats now. No Snowcaps nor Junior Mints nor walking out if the action grows dull. I’m here with you, little guy. If it’s not an answer, nor cure, nor any meaningful safety nor redress, it is at least, for what it’s worth, some company. Whatever gets you, I swear to God will get me.

And so it’s a life sentence.

Then, 21 months after my sentence came down, I found myself yet again hauled before a judge—a judge and plaintiff both. Swaddled in robes, frowning, his honor roamed zany eyes over me, walleyed then crossed, up then down. He gummed the air to speak. What could I do but just pat his tiny bottom. “Yeah, I know,” I said. “I know. I’m here.”

And they led me away.

Ben Nickol’s most recent book is Sun River: Stories (Black Lawrence Press), which was named a Best Book of 2019 by The Quivering Pen. Additionally, his stories and essays have appeared widely, in venues such as Alaska Quarterly Review, Boulevard, Crab Orchard Review, Fourth Genre and elsewhere. Originally from Idaho, he returned to the Northwest in 2021 after teaching for several years in the M.F.A. program at Wichita State University.