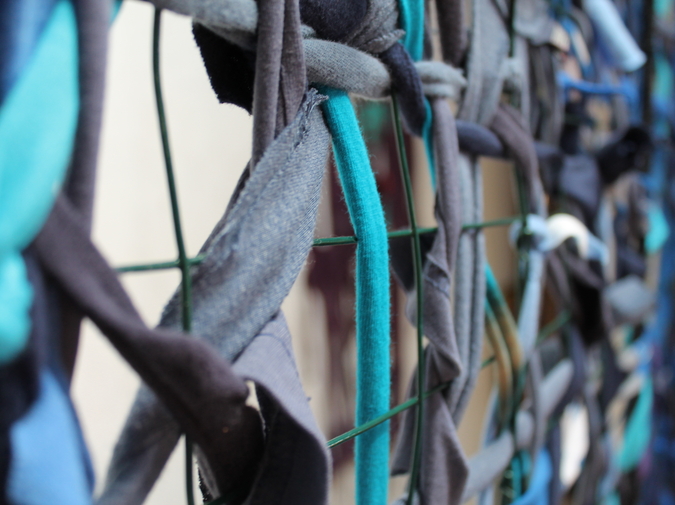 She was a junction you say to no one, gripping the air for emphasis like a pair of defibrillator paddles. Your cell phone lying on the kitchen table. You press the power button but it won’t power, having just recently been briefly microwaved instead of the cup of coffee you meant to, and so is dead. You stare down at the departed. The fulgurites of your heart chattering. She was, man, an episode. An emitter of staggering forked words (You are my heart/you are shit), the sharpest sounding like laughter. A thing from which one recovers maybe not fully. But one tries. A heart event.

Over your dead phone, you present your spontaneous, colorful opening arguments for alcohol, a lie of exquisite density: Alcohol isn’t to be reviled in and of itself. It’s promise. A hunter’s climb up an autumn path. Blood that leads to nothing leads on. Come along— crest a ridge and come upon not what you hunt, but a prescribed inferno: Hungry, burning undiscovered, eating all. Grow lightheaded with beauty and horror; that acrid light, an upside-down rising blackness of stars; a lung of barbed air. You forget everything and this feels like wisdom. And, reaching out, edging forward, you go one step beyond sense and tumble alone into an intricate void; a cradling emptiness rushing to catch you— you’ll come back. Drink, to see what could be drunk! The way people go over waterfalls in barrels or fling themselves from suspension bridges on a tether— an act of howled optimism. You’ll come back.

Since she’d gone you’d refined this account to a thing of pointless sophistication. Her imagined responses came back as distortions of things she’d probably actually said at one time— aloof and generous; glittery baubles of disconnect. Ativan pearls. I believe in you, she said. Get your shit together, she said. You can do this, she said. She didn’t say what. Then nothing. Leaving you alone in the proverbial blurry white corkscrew hallway. Cold walls. Sink down and press your cheek to the floor: also cold. Sleep there. Wake up in drool. Recover. This is recovery? This unyielding floor imprinted into your cheek. A voice muttering fuck it— this is your voice, and it doesn’t hang up, just breathes on the line. Now, a trail of mixed medication. Cold coffee. Feeding painkillers into your ear. Too much of her voice. Not enough. Studying her words to powder. White fingerprints on the refrigerator door. Pills falling from the cuffs of your pajamas, littering the couch cushions, pills on the floor like long, knotted silences. In the kitchen window is reflected your couch hair, your itchy unwashed dermis, your plaid robe, your unobserved shuffling nowhere steps as you white-knuckle an OJ, as you clutch at chair backs, your jaw flexing. You won’t make it. Make it where? Up, alone? You scream. Hold your hand steady. It’s steady. Call this a victory. Do this twelve times a day to prove. This is how you address Love in its ravine: As diagnosis. Shout a prayer. Wish it back. Backtrack, rationalize. Disassemble the weaponry of your need; stash it in pieces. Hunt the dial for games. Knock your sternum and listen. You can do it alone. Except you can’t. Even just to make it upstairs, back to the bedroom; to that wailing slab. Breathing is a solo climb. Memory, a bombardment watched from afar; unrelenting distant flares of being. There is nothing wrong with you, she’d said many nights ago in the bathroom, as you stood in the doorway; she’d snapped off her gloves, her caregiver’s dress, her mask of tenderness; dropped it all in a ball by the toilet; stood nude, dying her hair black, talking upside down in the sink. There’s nothing all that right either. You stood there like a tree on a dry plain. Not asking for a miracle. Not asking for anything. Just hanging on in unbidden solitude. She giggled once into the basin to a thought you’ll not know— Crack. The sudden hurt, conjured from nothing. You can’t say she didn’t try. You can’t say that. She went out the door and  dissipated into an idea you have trouble recalling at deserved intensity. You stood alone on the lawn and watched the car pull into the street. The wind in the trees. The shivering power lines. Whispers, antennae. Time of abandonment: 12:14 AM Tuesday. You wilt down against the impossible stairwell. The wine rack on the floor rattles once at eye level— twelve bottles. One for each step. Like most things, a little is not enough. Too much, well.

She could will something from nothing. She had black hair except for a forceful shock of gray. Selfstyled botanist, artist, cook. Thin, small hands— you could see the blue veins. Crazy as dusk. A drinker, too. She wanted a baby. You were together two years. Once in that time she said, let’s have babies. Plural. The words carried the runaway hope of a lone firework. She wanted to share her heart. A distracted grin spreading across her face as if she were entertaining the idea of preparing and then eating an entire birthday cake. (Someday, you said).

Her studio was an empty spare room upstairs. It was always cold in there— hardwood floors, bad insulation. No furniture. Just a stack of canvasses and empty beer bottles and a spinning wheel and two windows and a couple of plastic milk jugs with lotus shoots in them— it was the worst possible room for that. She painted big and messy; gleeful drips and spatters, all over the floor. This led to experiments on every surface until the room itself was a smothering grotto of color. Handprints on the floors, walls, ceiling. In the cooler months, she worked in a hat, gloves, and a scarf— she’d made them all. Handspun the yarn. You would bring home pizza for dinner and, despite the extra clothes she wore to keep warm up there, she’d routinely appear at the dinner table with her skin covered in paint. Her forearms striped red; acrylic white freckles; one eyebrow blue; a bright archipelago laid like kisses across her throat. Sometimes her paint found its way onto your own skin, though lessened. This itinerant brightness was always strange because the actual work she produced was often so pale— she had a shy, elegiac touch. A flock of blurry sparrows; compass directions; effluvium, wind. The quarter-inch of chill on a cold pillow. A dinner party where no one came. She said even in an empty house there is love in every plate, every fork, every knife. There is love, or there is not. You still have your favorite of her paintings— it wasn’t her best (this is relative) but it was by far her biggest. It depicts a five-by-seven-foot pale green wall. At the bottom left-hand corner of the painting there is a nightstand, off-center. On the nightstand there sits a glass bowl of ice water. To the right of the nightstand, the upper corner of a bed (the sleeper’s bent arm is there, barely present at the edge of the frame— this could belong to anyone). Something gray floats in the ice of the glass bowl.

This painting hangs over your bed. You’ve looked at it from near and far. You’ve squinted, tilted your head. Stood so close you could smell the dust. Fallen asleep beneath it and at every position relative. Studied it. Let it leave your thoughts, only to have it return on some chance day when it seemed new again; like when the windows stand open for the first time after a long winter. All that time, you could not make heads or tails of the bowl’s little warped flower; the small deformed grayness, and all that space. It was November she’d left. Left the cold bright room. Left her paintings. Took the lotus.

Of those years in Charleston, where you were briefly engaged, what you will remember: Sitting alone at a café. The perfect dumpsters. Newscasts in the lingo of craft beer. A rabble of mansions; millionaires in storage. People well; well-fed. Generations of fiction. The immaculate bright dumpsters, the brick paths. The rote mapped discovery by carriage: past the slumbering Yorktown whale. The galleries. The torrid airless gardens. A meandering blockade of bedecked verities; inveterate rainbows of trivia. Pride. Projectiles embedded in the sides of buildings (hallowed wounds). Dubstep violin over horse hoofs. A chance midnight wing brush of conversation; promise; dissolution. It ended in you leaving abruptly from an argument, and from the comfort of her bed—the weight of engagement having suddenly landed like a lead ball, just as suddenly as sobriety might fall onto a drunk whose self-amused antics have landed him nude on a bicycle and wobbling into a cul-de-sac of disapproving loved ones. You spent the night roving the waterfront, reacquainting yourself with an old, gutless doubt; how you could choose any other spot to bed down— in the mouth of a cannon; a low-hanging limb; the shores of a gusty island— and get a better night’s sleep than next to any human being; you could spend all night in a raw bar only to wake in the predawn, floated to the concrete at the bottom of a short, private drive, backed over by a Mercedes, lonesome and broke and happy and not gutless at all, a merry shipwreck of shrimp in five kinds of beer to prove it. The stunning dumpsters. A fresh installation of brides blazing in overload, affixed daily to the echo stones and photographed for their hour of mortal radiance, their laughter triangulating a point unknown, a point rumored, an unmoored joy. Overhead, petty cloud. A public fountain shut down due to fecal matter. Slim lawns like the mossy keys of a piano, never played. Servile ghosts emerging from shuttered interiors, polishing doorknobs, dispersing. The radiant listening blacktop. A heartburst of perfect red dumpsters. The sultry pools of horse piss— the way they blasted into existence. One in front of the café, forming the dazzling shadow of Sweet Inez; awaiting her betrothed. She hadn’t long to wait; an orange surveying flag dropped square on her kisser. Not saying you were sorry. Because you weren’t sorry. But what about now, in Pennsylvania, landlocked? A photo album full of dumpsters? Not saying you were sorry. Not saying you were scared. Keeping your pride— some words hurt to remove. An equine sanitation patrol truck pulling up to the curb. A man unspooling a hose. A cruise liner setting sail in the dark. Alone at the café. A trombone moaning once, high.

Jason Kane lives with his girlfriend in Pennsylvania, north of Pittsburgh but south of Erie-- in that general vicinity. He has had work appear in The Northridge Review, Juked, Press One, Pear Noir! and others.