Excerpt from The Old Colonialists 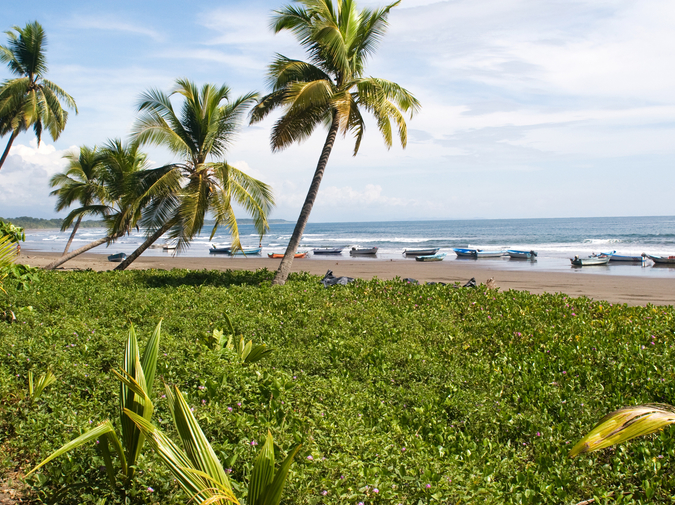 A few of the Greater Mosquitoes jogged by with their boards across the flats, all chest and teeth and bleach-brown hair and headed joyous to the break.  They ran full on down the slope, stepped high when they hit the water, dived onto their boards and paddled.  I turned to have a look at the crowd behind me, gathered at the door to Marta’s place.  I saw the vultures turning high up from the cliffs above them and I might have read a death or omen by their presence, though had come to understand such turnings as the pleasures big-winged birds are likely to enjoy from riding wind and shifting thermals.  I continued on to Senor Monte Cristi.  I felt hopeful, neither knowing why I felt hopeful, nor why I felt the need for hope.  I jogged several paces and wondered how the world might otherwise occur were all its people able to run seamlessly from sand to sea and launch themselves headlong to skim across the foaming waters.  I stopped myself some paces shy of Senor Monte Cristi, perspiring and panting.  The Greater Mosquitoes pushed the noses of their boards down deep to duck the inner break and paddled hard to make the outer.

What joy there was in life.

How contentedly we sat to watch out for the waves we knew to carry such impartial devastation.

A few of the Enthusiasts passed me by and followed after the Greater Mosquitoes, but the crowd back on the malecon was otherwise intact.  A naked child ran back and forth and rolled a bike-tire with a length of stick.  The Ass Posse, Cesar and Uta and several others of her like all bobbed their heads and flexed their knees in what appeared to be a form of dance, which centered from the kid with the scalp, who held up his device above his head and played a kind of music I suppose he thought might please the young black man from Ghana.  The Ghanaian, a tribal prince, in his country, later known to us as la Ghanista, moved away from the kid with the scalp and toward the village elders.  One of the elders offered la Ghanista a turn at the bottle of caña.  I watched him take his turn and shudder and then join the elders in self-effacing laughter.  I made my final steps to Senor Monte Cristi.  I stood beside and slightly behind him, far enough away to keep the blowing sand off.

Senor Monte Cristi rested on his elbows.  He looked up at me from under the brim of his hat, pushed his tongue across his teeth, then looked back out to sea.  He seemed not to watch the surfers.  I could not see what he watched except the sea.  I did not know what to say or in what language.

He scratched himself under the tight elastic of his speedo where most anyone would wish he hadn't.  He looked up at me again and squinted.

“I know who you are,” he said.  He kept his eyes to sea and seemed to not have noticed the hand I held a time beside him.  “You are the asshole who sells the condominiums,” he said.

I retracted my hand.

I looked at him and waited for what more but there was nothing.  I did not know how I failed to notice, even from my former distance, his abundant body hair.  A soft, black, curling fur which covered Senor Monte Cristi from his neck and through his shoulders, to his belly, knees, and to the knuckles of his stunted toes.  Perhaps, from a distance, he had appeared to me to be tan.  Or perhaps I had focused on his hat, and on his speedo.  Perhaps I could not see his hairiness, owing to an unsubstantiated habit of belief, which needed hairlessness as unconditional prerequisite to couth.  I doubted whether he knew much of anything about the whales.  I tried not to watch his toes.

He coughed and cleared his throat and cleanly spat out something green and massy.

“Italiano,” said Senor Monte Cristi.  “I am a dying kind.”

Senor Monte Cristi looked to me.  He lowered his glasses on the bridge of his nose.  His eyes, I noticed, bulged a little from his head.  Had I not just learned he was Italian, I would have guessed by thickness and by length his lashes must be false.  He blinked very slowly.  He seemed a caricature of his Italian self, velveteen, puppy-doggish; his eyes were opera, thin red wine, and murder.  The more I looked, the less he appealed, and yet I could not keep myself from looking.  Follicles, flesh, secretions, the empire of the body's rapid avenues of corporal decay.

“So many people in the world today,” he said, “so much competition.  Who does not wish to be a star?  Very soon, I am afraid I will be, as the British say, redundant.”

Senor Monte Cristi grinned.  “Of course,” he said.  “That is because you are an asshole.”

I rested my elbows on my knees, my forehead in my palms.  My shirt was dry.  The hurt surfer’s blood was the color of rust.  Evidence of iron, I supposed, our participation in the mineral existence.

“In the wave.  Look, there, sometimes you see them swim.  Many, many more today.”

“Then look again,” he said.  “You must learn to see the inside of the wave, not the outside.  The fishes swim there.”  He pointed with his chin.  “Look.”

I watched a time, and when I saw the fish I could not keep myself from seeing fish.  They were, as Senor Monte Cristi said, so many.

“I never really noticed that,” I said.  “It’s beautiful.”

“I think sometimes you see the fish jump from the water, you see him swim in the waves, I think he swims from the fish who wants to eat him.  Today, I think the fishes here would like to swim away from the tsunami.  I think today they know they will die.  Today they know a thing will come and maybe kill them.  Maybe they know the thing is water.  And for this they swim so close to the top of the water.  They swim like this to live.  To escape.  I think, yes, this is beautiful.  To live is beautiful.  To escape is beautiful.  Is this what you think?  I think this.  If this is what you think, I think yes.  What do you think?”

I watched the fish for awhile and wondered what about them made me want to say I thought that they were beautiful.  Was it Senor Monte Cristi, my desire to indulge him?  Or, perhaps I had also seen the beauty in the terror, the exquisite light life shines from death’s enfabled shadow.  Most likely, I suppose I thought the fish were pretty.  This was the privilege of my place in life.  To look straight into terror, suffering, and death and never need to see it.  I watched the slim fish swim and rise with the wave, their long fish bodies cast through clear blue waters colored by the sunshine and the sky.  The wave fell and the wave rose up and there they were again, these fish, ephemeral, and permanent, testaments to nature’s effortlessly artful talent to command the gaze.

I thought: These are the days that sell themselves.  The Stinsons and the Bucks came off their boats and were flaccid, gray, sun-scorched and aching, having lived their ten to fifteen years of pitch-and-roll, rust and barnacles and cramp, and were primed for the new life with the king-sized pillowtops, walk-in closets, His and Hers, tiled floor, thatched roof and a bamboo rail around the second-story balcony, a carved door, perhaps, depicting narratives from ancient, locally extinguished cultures —my stuff—but if the sky is gray, and the flies are biting, and the beach is thick with jellyfish and plastic, then no matter their readiness to abandon ship, or to flee the tedium of prairie life, the stress of eight-lane traffic, I see their faces shift to neutral, their brains into reverse, and I can hear the questions coming on about stability of government and banks, intestinal distress, petty thievery and rape, those mangy, crippled dogs and what they carried and if it was contagious, and I know I need to work.  But let them see a school of dolphins swimming off the beach; let them see the frigate’s blown-up, crimson throat; let me say to them, “Hey, look there, you can see the fish there, swimming in the wave,” then my job is largely over.  They can wall themselves in against the thieves, they say; those scrolly, iron window grates are actually almost sort of European.  Plus, they can bomb for bugs.  Pay to have the dogs all spayed and neutered, maybe fund a project in the schools which taught both abstinence and proper use of prophylactics to curb the unsustainable growth of local human populations.

I watched the waves come on.

The fish were super pretty.

I had not quite made it big in Mexico.  A little late to Costa Rica.  In those days, I was on my way to a wad of money, and either balked and frittered or became a little paralytically depressed by the certainty of our immanent successes, a view from the quiet dirt roads and the undeveloped sand to the paved and covered parking soon to come, franchised chicken, cyber-surf cafes, screaming co-eds on banana floaties dragged about by jet-skis.  Now I had another stake and in the post-crash rush to build the gray-haired dream for cheap, was near enough to being down here first, old and desperate enough to close my eyes to those few signs which summoned up the old depression. Imagine: Maria brings the coffee.  Tulio sweeps the pool.  Blue, blue day, yours, all yours folks, new world beauty and abundance.  I looked up and down the beach to the abandoned shrimp farm, Nestor's chicken ranch, a pack of ribby dogs, sand, sand, sand.  I wriggled my toes and faced up to the sun, heinous happy to be privileged.

I asked Senor Monte Cristi, “So, what talent?”

Sam Michel is the author of the short story collection, Under the Light, and the novels Big Dogs and Flyboys, and Strange Cowboy: Lincoln Dahl Turns Five.  He lives in Montana and Ecuador, where the excerpt from a yet unpublished novel, The Old Colonialists, is set.