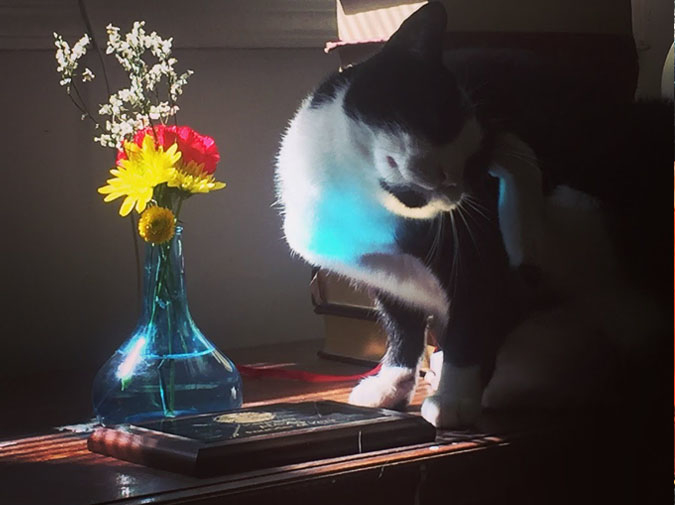 When Lalita came into the bedroom afterward, she found Lucy reading a magazine and listening to Enya, wearing a white silk mini-robe they had seen in a lingerie catalog a few months before and lounging on the bed.

“Let me do your hair,” she offered, making room for Lalita.

Lucy wasn’t embarrassed about touching Lalita or any woman-friend; she did it all the time. They could be talking about women’s tennis or the governor’s race in Connecticut that year, and suddenly Lucy might say something like, “I wish my breasts were shaped more like yours. Yours are rounder,” reaching out as if to stroke the side of Lalita’s breast but then pulling back, laughing at the shocked look on her face.

Lucy seemed to love being shocking. At Yale, there had been many nights when Lalita peered out from under the covers, listening with rapt attention as Lucy sat on the edge of her bed, just like now, and described how she drank champagne from a boyfriend’s mouth, modeled lingerie for another boyfriend, was stopped by a man painting portraits outside the Yale Museum, near Atticus, and offered hundreds of dollars to pose nude. Lalita would blush, held her hands up to her burning face and said, “Stop! Enough!” Lucy would laugh and tell her more, relentless. It made Lalita feel like she was playing the game Red Rover in a school yard, one person facing the wall alone, heart beating a bit faster, unable to see what the kids behind her are doing, hearing their voices, conscious of how they must be coming closer and closer until her back tingles, they must have reached her, they can touch her now, grasp any part of her. Lalita shuddered at this memory.

“What is it?” Lucy hadn’t finished combing Lalita’s hair. “Would you be still?”

Bending her head forward now, obeying Lucy’s instructions over the soft buzz of the hair dryer, Lalita thought of another story she has never told, a more secret story than the one about Ajay. Once Lucy asked her, putting on a serious face, if she ever had an orgasm; if she knew that a good man could be trained to give her multiple orgasms. “It’s his job,” she said, still serious. Lalita had giggled. But she did know about all that, or some of it at least; she had her first orgasm when she was twelve, at the very beginning of the journey that she planned to end tonight, in bed with Noah.

Eleanor Fish was the one responsible – also twelve at the time. They were both in the sixth grade, but Lalita was called an “early developer” and made a point of taking her showers alone, before sunrise at the summer camp where she met Eleanor. Lalita didn’t want anyone to see her and point to her rounded belly, her breasts that at twelve were like a camp counselor’s, her calves that were already hairy unless she shaved them, and her thighs that were unfashionably full. During the day, when other campers tanned or positioned themselves strategically so that the cutest boys would notice them, Lalita would hide behind a cheap paperback version of her latest thrilling library discovery – Portnoy’s Complaint, The Rubyfruit Jungle.

Mornings were always more difficult and exposed, all the girls jostling to get ready. Still trying to evade them, Lalita started her shower. Eleanor walked in alone, brushing her teeth and sitting on a stool right outside the stall where Lalita stood. There were no curtains. Lalita positioned herself carefully so that her back was to the other girl, but she could feel her staring. “Do you have a staring problem?” Lalita almost said, repeating what other girls in camp would say whenever they caught her looking at them longingly, wondering what they were whispering and laughing about. She stayed silent – even now she couldn’t say why no words had come that day – and finally turned around, letting water run over her arms and thighs, covering herself with a washcloth, but Eleanor was still watching, seeking eye contact. Lalita refused to look directly at her face. She turned around again like a cat circling on a ledge and turned off the water. To get to her towel, she would have to move past Eleanor and grab it from a hook on the wall. There was less than a foot of space between Eleanor’s stool and the wall and the girl showed no sign of moving out of the way. “Excuse me,” Lalita mumbled as she moved past, feeling Eleanor’s hot breath on her skin, the wetness of her tongue at her belly button, fingers plucking at her hip. But she kept moving anyway, grabbing the towel, wrapping it around herself without drying off first, and then running the several yards to her cabin without a word, not even “No.” The other girls were still asleep in the dark room.

Chaya Bhuvaneswar is a physician and writer with work in Narrative Magazine, Tin House, Electric Lit,  The Millions, Joyland,  Michigan Quarterly Review and elsewhere. Her poetry and prose juxtapose Hindu epics, other myths and histories, and the survival of sexual harassment and racialized sexual violence by diverse women of color. Her debut collection White Dancing Elephants will be released on Oct 9 2018, by Dzanc Books and is available for pre-order now at amazon.com as well as indie booksellers. Her book has been included in "best books of fall 2018" lists out now from The Millions, Kirkus, Buzz Feed News, Huffington Post, Vulture and Lit Hub and featured in sites such as BookMarks Reads, She Writes, and the Erie Gay News. She has received a MacDowell Colony fellowship, Sewanee Writers Conference scholarship and Henfield award for her writing. Follow her on Twitter at @chayab77 including for upcoming readings and events.