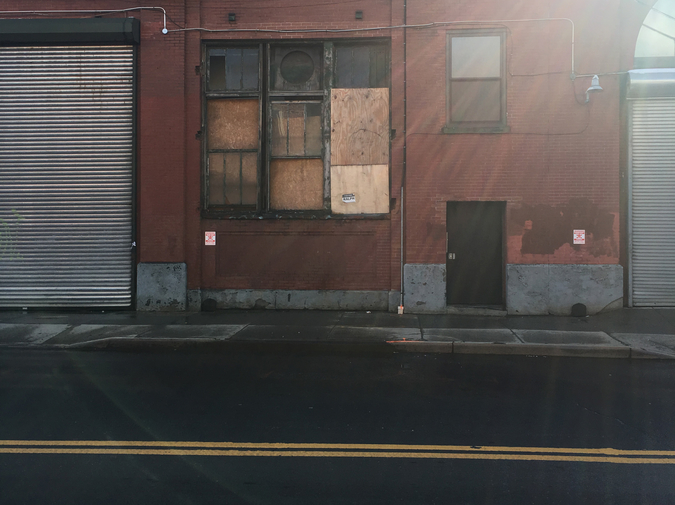 You’ll wonder in later years what was so funny about everything. You will wonder this as you are hunched in your university shower, not quite kneeling for fear of whatever is growing on the yellowed tile. The water is scalding and leaving red, smarting blotches across your back. You can’t catch your breath. You’re wondering, once again what was so funny about everything, and you’re spending today, Valentine’s Day, thinking about the last one.

The last one: you spent eighteen hours in a Greyhound over one weekend for a town you don’t know, for your sometimes best-friend who you only see a few days every year. At eighteen, she is full-grown and lovely and settled in a way you can’t understand. You, even at college, remain underdeveloped, inexperienced, shockingly naive, and laughed out of a crowded dorm room one night when you express confusion over a bong.

She speaks some secret language that you don’t, it buys her laughter and the attention of rooms and beautiful friends- she has been able to do this, to your amazement, since you met when you were twelve. You feel yourself turn onto this special frequency with her, like your shared humor hasn’t once evolved since your childhood. You have secret nicknames. You develop these other voices around each other that leave you both in peals of laughter. You aren’t sure what will happen when you see her- you don’t picture the stupid voices, but you also don’t picture the girl you know exists, the one for whom mens’ heads turn, as if on a swivel.

You spent the weekend together rushing through all the illicit young adult joy you can. Smoking weed, eating crap food in fluorescent diners, stumbling through a handful of neighborhood basements. She knows everyone, you know no one. This makes sense, of course, you are far from home and she is home. It still makes you feel weird in a way you don’t understand.

It isn’t exactly Valentine’s Day- by now, the holiday is a few days gone. But for all intents and purposes, it is. You spent nine hours on a Greyhound, for God’s sake. You spend so much time in starry-eyed silence around her, but you don’t once find yourself longing for the hysterics of your youth. There is something heavy and unknown settling in its place. You have come here to tell her something, though you don’t know exactly what.

At night, you are sleeping on her floor. She’s up in the bed next to you. You can tell by her breathing she is close to sleep. A fews days ago was Valentine’s Day. The party was called Hearts and Farts, you picture yourself telling her. It was a lot of older kids, a lot of people I didn’t know. It was sort of formal. There was dancing.

You were wearing the same dress you had worn out tonight, the one now crumpled around you in your sleeping bag, stained with the darkness of clear drinks. You were tiring of everyone at the party, you were very very drunk, you were sitting away from the noise by yourself on a flight of stairs that had been painted all the colors of the rainbow.This detail sticks, and you don’t know why. Those stairs.

When he sat next to me, I was happy to see somebody I knew, even though I hadn’t seen him in a long time. For a long time, I think we were just talking, you would say next, and you pictured her sitting up then, propping herself on one elbow to look at you. Her eyebrows (light blond, disappearing) would knit in concern. She was the most earnest person you knew.

You hadn’t yet told anyone about that night, not honestly. Not even to the girl who yanked you by one arm out of the upstairs bedroom. She was a stranger, she stood in front of her with her arms crossed while you rushed your clothing back on. She marched you to her front door, into the night.

You know now that this stranger had rescued you. You know now the details of that night, only because she filled in where your memory stopped, or where the drinks started. You never thank her, she keeps reaching out to do in the days following, asking if you need to talk. If you need coffee.

But that night, she just deposited you into the street and you had no idea where you were. The streets blurred and tilted through your watering eyes- then Pearl St., then College St., then finally familiar Main St., and the metallic-penny taste disappeared from your mouth as the panic dried up. You don’t remember much of that night, except that you vomited in the street. You woke up, miraculously, at your boyfriend’s. You bought the bus tickets the next day. You didn’t have a reason. You didn’t need one.

The gravity of the situation never really hits. You hear yourself tell a numb and sanitized version of Valentine’s Day to your boyfriend, your sister, your friends. And you picture yourself telling her now, her blonde hair is fanned out under her and you can tell she is close to sleep. You are shaking so bad just thinking about it.

You say her name once. You say it twice. You expect her to turn to you, a little annoyed, her voice thick and raspy from sleep and booze. But she flips towards you compliantly. She is backlit from police lights in the window, blue then red, blue then red. She looks impossibly soft. Half a smile in her lips, half mast eyes.

You find yourself recounting instead something stupid, a prank, if you can even call it that. Remember the day you boosted me through the window of Lafayette? You both laugh. You have both re-told this story plenty. It was barely funny to anybody at the time. It remains rabidly funny to you both. I was standing on your back, and I went in where the screen used to be.

You both fill the rest in. The screen, now dented, lying in the tangle of young conifer scrub. You, scrambling like hell through the window, which was high up. Outside, she whispered instructions to you, and you hid under the sagging springs of the bed inside stifling laughter. Your mission: leaving a serving spoon, face-up, under the pillow of a girl you both vaguely admired. The reasoning is gone to you both: why a spoon? Why the elaborate break-in? You must have been twelve or thirteen.

You both remember together, out loud, in her dark dorm room. You are both twelve or thirteen together, fairly close facsimiles of the people you are now. Her: tall, even then, all legs, quick to laugh and make others laugh. You think of the words natural ability to describe her, and you don’t even know what abilities you’re even describing. She just has natural ability. You: mousy, lacking in social graces, bad eyebrows (back then, from pulling them out. You did this compulsively through middle school. Now, your eyebrows are bad from those years of abuse.)

You are both suspended in it for a minute. You are tempted to blow open that summer afternoon, make it something bigger. The last summer we were ever that happy, you could say, and it would be melodramatic but true. You were both wracked by the paroxysms of adulthood harder than your peers, it seemed. Every subsequent summer that inched towards adolescence you remember for its quiet horror and its hard departure from the joy of your childhood. You remember saying the word “depression” to each other, on the pine-needle covered basketball court one night, and the word was ugly and hushed and terrifying. The two of you, talking that night, trying to explain feelings you barely understand, nodding at each other in wordless agreement.

But you don’t make it bigger. You let it sit. You don’t say a word about Valentine’s Day, which is retreating to the back of your mind already. It will sit for a few more years before you unpack it. You end up in her bed that night. You leave early via Greyhound.

You don’t see her for several years after that, minus a brief and sweet span of days that following summer, in your usual place. You play Bob Dylan’s Mama, You Been on My Mind squeezed on a piano bench with her. Your fingers move falteringly over the keys- you don’t actually play piano. But for this, you do. Her voice soars. More than most things, you love singing with her.

When February rolls around again, you are short of breath in a filthy dorm bathroom, you are feeling the waterlogged walls closing in, you are hunched down before you can fall, you are seeing stars. You are not thinking about Valentine’s Day (the party was called Hearts and Farts, it was a lot of older kids), but you are thinking about your Greyhound weekend not too long afterwards that was really Valentine’s Day.

It seems impossibly sad now, your small, drunk self in her room, and all you could think to talk about was that stupid spoon, the serving spoon, the day you boosted me through the window into Lafayette. It is also comforting that the story, and its telling is still funny. Everything was funny- how was everything so funny?

Like your entrance to your teenage years, your entrance to adulthood has been graceless. You fuck your brain with drugs. Your penchant for self-sabotage knows no bounds. You fail a lot of exams. You lose touch with her, largely, but the updates you get are fractured and similarly worrisome. You never ask too many questions, and she never asks too many about you.

Your ability to remember is your remaining gravity, the tether between your feet and the Earth. You liken your drug use to putting your fist through a hole in a sweater, then spreading your fingers. The holes grow and the fabric thins. You want there to be more left than there is.

You hear the idle chatter of the dorms from your frozen stance in the shower, you watch water turning white-hot circles towards the drain in the floor. You forgot shower shoes. You’re vaguely contemplating dropping out. You don’t think you’ll ever stand up.

Hannah Carpino is a short story writer and poet living in Vermont. Her work has previously been published in Rust + Moth and the Rappahannock Review.