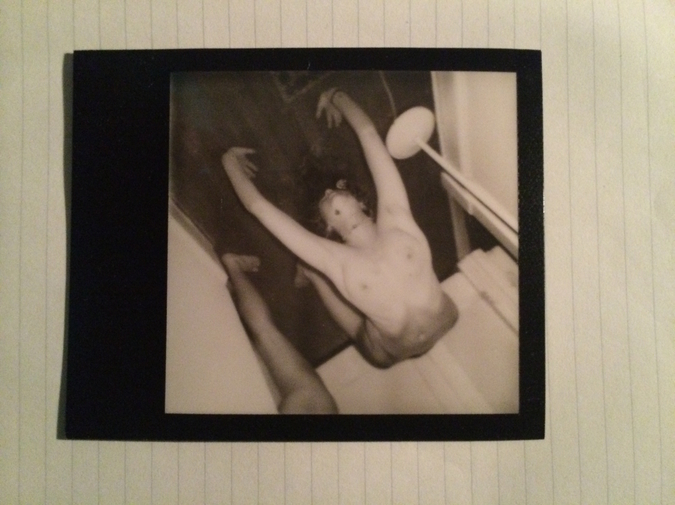 I lay in bed with a man who was next to a woman. I couldn’t tell who had initially begun the rhythmic breathing pattern but our bodies were in sync; sucking down and spitting out oxygen in unison.

I could feel the warmth radiating from the man’s body as I cuddled next to him. The fleshy leg of the woman draped over his and rested on mine. I felt her warmth too. The comforter trapped our body heat beneath it and I was the most comfortable I had ever been in my life.

His bed was so soft.

The man lying between the woman and me was my friend, Roger. It was his bed and we were in his room. He’s usually the loud and hilarious type but that morning he lay still and quiet, occasionally whispering lines from his dreams.

The woman was also a friend of mine. Let’s call her, Bee because if anybody is the Bee’s Knees, it’s her. When I think of this beautiful, free-spirited nappy redheaded creature, I recall the summer afternoon that she sat perched topless on a rock in the middle of a river in the Appalachian Mountains. She reminded me of a goddess from an old Renaissance painting.

One thing that I failed to notice that day at the river that I noticed during the morning in Roger’s bed was that Bee had three small moles on her left hip above her waistline. The moles formed a triangle on her skin like a constellation in the sky. In my mind I imagined Roger, Bee and I each representing a single mole on her side, together forming a pyramid or some kind of love triangle even though none of us had been or probably ever would be romantically involved with each other. In theory the notion was poetic enough for me smile.

The events of the night leading up to me settling in Roger’s bed may sound insane to anybody who wasn’t there. I had traveled a few hours north to Boone in order to celebrate my friend, Sheen’s 22nd birthday. He and his roommates always knew how to throw a party so to give you a small insight on how it went down, here is a brief recap of some of the moments from that night:

It was probably 3:3o in the morning and I was wide-awake because of the acid. I was anxious to do something but nothing in particular. I was jittery, lively.

I roamed the house trying to find something to do or somebody to talk to but the alcohol and/or weed in the bodies of others had driven the lucky ones to sex and misfortunate ones to unconsciousness.

I ended up finding a kid named, Owen (who was also on acid) and my roommate (who had just played a show in Boone.) They were cooped up on the floor of the practice room, surrounded by instruments, bonding over their love for the Swedish folk musician, The Tallest Man on Earth. They passed an unplugged electric guitar back and forth showing each other the songs they knew. I had never considered the sound from an unplugged electric to be a pleasing one but the warm strum and high pings from the instrument reminded me of the first time I had unprotected sex; it just felt so good. LSD has this way of making the normal seem immaculate.

As I lay on the beer stained and ash covered carpet of the practice room—-or the jam room as it is often referred-- listening to them swap sounds, I realized that that I wanted to really feel something. The music they were playing felt good internally and soulfully but I wanted to feel something tangible. So, I found the bass guitar on the other side of the room. I lifted it from the ground and placed its strap around my body as I turned on the amp. As the axe hung from my shoulders I listened to the untouched silence and anticipated what I was about to do. I don’t really know too much about guitar music theory at all but I’d dicked around on old roommates’ basses enough to make a sound.

So, I took a deep breath, sat my ass down on the amp and allowed the parabolic groove from the bass’s body to rest smoothly on my left knee. I gripped the neck and I placed my finger on whatever fret felt right, it didn’t matter. I plucked the fuck out of it.

What I got was a goddamn eruption, a trembling burst of sound that rippled outward. When that initial chord hit, the reverberating sound rung and vibrated hard all over us, rattling the snare drum and walls near by. I felt the rumble all over. It was such a rush. I nodded my head, smiling at my friends. I knew the kid on acid was feeling me. I couldn’t resist—-I did it again.

Damn, it was so exhilarating. I felt like I had some type of superpower. I could cause sound to explode from my being anytime that I wanted it to. After the chord would ring I would wait until the sound dissipated like a cloud of smoke in the air before strumming my next note. My favorite part about it all was the break of silence before the sound explosion. I could physically watch nothing gradually grow in size into something as it suddenly spread and expanded all over the room, shaking me and everything in its path. fuck. I almost jizzed myself from the sensation.

Eventually, I had to put it down. I was becoming addicted to the power and feeling. I could’ve mindlessly swiped my hand up and down that thing for hours, not making music but getting off to the vibrations if I wanted to but I had to control myself.

When I returned to the corner of the room to rejoin Rusty (my roommate) and Owen, they were talking about Elliott Smith and Jeff Buckley, my two favorite dead guys.

For the next hour or so, Owen and I alternated between lying on our backs and sides as Rusty finger picked Elliott Smith songs and the occasional Jeff Buckley song on that same unplugged guitar. He didn’t sing the words out loud but I heard them in my head so it was perfect. Rusty was like a little jukebox radio that night. He was drunker than hell and for some reason he was on point. He barely missed a note as his fingers ran up and down the frets and strings in quick succession, embodying the dead men who wrote the songs; allowing himself to feel what they felt when they put their tortured hearts and minds into their guitars. It was almost as if he was possessed by these men when he played their songs. I felt the passion in the sounds that they created through their emotions come from Rusty. I was smiling so hard that I wanted to cry.

It was magical while it lasted, with the glowing green and red neon beer sign on top of the piano organ next to us providing the only light in the room. Eventually, Rusty had to call it quits. He was drained. Plus we had to go back home to Charlotte in the morning.

Rusty calmly set down the guitar next to him and bundled up with whatever blankets were near by. Owen found a corner with covers and beanbags and made himself a nest. Considering he was still tripping, I’m not sure how or if he slept but I hope that it was a peaceful rest.

I walked around some more and perused up stairs. I pushed open the cracked door to Roger’s room because he’d invited me to sleep there earlier in the night. There was a space open for me as he and Bee occupied the other 2/3s so I peeled back the blanket and quietly slipped myself under them.

It was a pleasant rest. I dreamt of vibrations and suffered from orgasmic shivers surging up and down throughout my being. I shuttered with ecstasy as if being electrocuted during my time in bed. I stayed there until I could no longer handle the sensation. I wanted to feel something new. I felt as if I had fulfilled my time in the bed and wanted to explore my other options around the house.

When I opened my eyes, daylight had arrived. I had almost forgotten that such a thing could exist.

I removed my portion of the comforter and walked toward the bedroom door. I turned around once more to admire my slumbering friends to make sure that I had not disturbed them and when I returned to the door, I caught a glimpse of myself in the mirror. I chuckled at my reflection. It was me, the same me that I see on most days but for some reason I saw myself as an unfamiliar species would’ve seen me. I just looked strange. Some ugly creature with big eyes, a suspicious face. And limbs covered in fabric. It was weird. I just looked like a human. It was funny.

I walked down the steps trying to be as quiet as possible. I entered the kitchen. Rusty and acid-head Owen were still asleep in the jam room and a couple of shaggy dudes were snoring on the couch in the living room. I was the only one awake and functioning. On the kitchen counter I noticed the remnants of a forgotten half eaten apple. I finished the job. It was sweet with patches of exposed rot. I opened the fridge and found an untouched one. It was bulbous and large and round. I wanted it.

I slid open the glass door and left it open as I stepped outside into the backyard over smashed pumpkin, ash, trash, garbage and beer cans. I was in my socks and the grass was damp and muddy from the spilled beer that had seeped into the soil.

The roof from the house casted a shady shadow on the grass but beyond it was yard untouched by darkness. I wanted to go there, to the sun. I wanted to feel its rays on my chilled body.

With apple in hand and lit cig in my mouth, I walked into the light with soggy socks and found a perfect patch of damp green. I lined the apple up with my eye and admired its beauty and its life as my mouth salivated like an animal about to pounce on its prey. I un-hinged my jaw, widened my mouth and took my first bite into the cold crisp flesh. The apple’s juice, chilled sweet and flavorful, rushed into my mouth, flowing over my tongue. I chewed the chunk to bits, entirely delighted. I continued to bite, devour and swallow the apple savagely with wetness running down my lip and chin.

It was v symbolic.

Life in Boone, or the High Country as they call it had always been kind to me. Its crisp thin mountain air had always been easy on my lungs and the high altitude had always granted me a perfect view of the sparkling stars in a night sky.

I could exist in seclusion amongst the people in that house that morning for a lifetime in a perfect universe. Maybe I experienced what heaven would be like theoretically. No work, no jobs, no school, just leisure with people you enjoy and music and good meals and the great outdoors and drugs and smokes and booze and women and sex and good sleep, warmth.

Victor Freeze makes money for a living, lives in Charlotte (N.C.) where he is 'in a band,' tweets, and still can't swim.