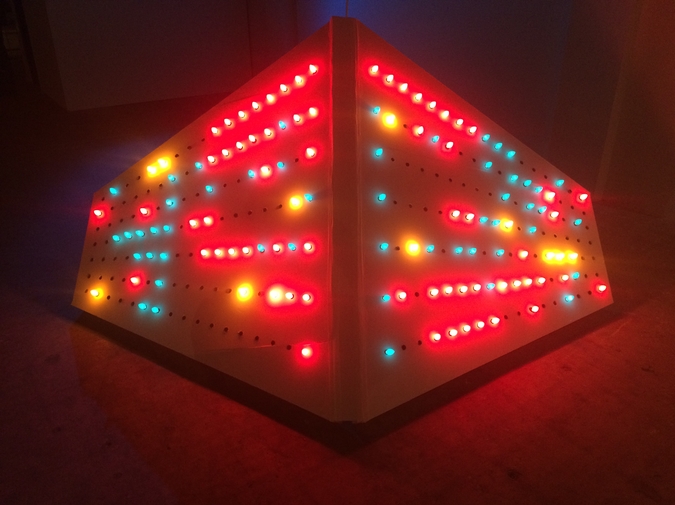 Thank you for agreeing to serve as my culture champion. I appreciate you.

Your recollections of the airport Marriott were solid: I found the blast of medicinal chill at the reception desk, the satisfying stiffness of the hotel towels, and the blue neon wave at the bar creating hopes of an early dismissal. Only, the conference rooms are now called Engage, Synergy, Collaborate, and Convene. I would feel better about this if the names were at least the same parts of speech.

What your extensive prep could not have foreseen were my hemorrhoids, which are ripe. I foresaw them, and it was all that forseeing that led to what I foresaw. I missed the morning seminar, but got the general theme: Be Here Now. Apparently, that is the deal with these postcards. If we get on our computers and start sending e-mails, it could compromise our ability to live in the moment.

P.S.  The IT boys aren’t happy with this assignment. It turns out they don’t know how to handwrite.

Thank you for agreeing to serve as my culture champion. I appreciate you.  The spongy offerings of cantaloupe, honeydew and lemon poppy seed muffins could not fortify me for the animal kingdom exercise. I tried to botch the self-assessment to prove you wrong, but still managed to score in the donkey sector. It is a step up, I agree, from goldfish or sloth. After the morning break, when we had to act out our animal selves, the head of sales in her tiger mask skulked over and forced me to carry her handbag. Fittingly, it was an animal print purse. Five other tiger ladies did the same, until the file clerk—who perhaps did not understand the figurative nature of the exercise—came over in his snake mask and actually bit me on the ankle, sending me crashing to the durable mauve, Marriott carpet, covered in ladies’ leather.

P.S. The hemorrhoids are still flaring, but with the throbbing in my ankle, it’s hard to focus on my anus.

Thank you for agreeing to serve as my culture champion. I appreciate you. The operations team demanded I lay still on the floor of the Synergy ballroom until a medic could arrive, leaving me time to contemplate the boob-shaped chandeliers. I recognized those chandeliers. My wife’s cousin’s wedding was held in that room, or another identical Marriott ballroom. My wife acted at that wedding like she always does at weddings, intent on recapturing the anticipation of our own matrimonial day. I don’t think her cousin’s wedding actually evoked these feelings for her, but she wanted them to. She put her hand on my knee and touched my foot with hers, humming along to At Last as though I were a wooden figure she was desperately trying to animate. My wife believes that if you smile you produce happiness, like you can mimic feelings in the hopes of actually experiencing them.

P.S.  I guess it’s the same kind of mentality that names a conference room Collaborate.

I apologize for repeating the local water park postcard. There are only three card options in the Marriott gift shop. If you look closely you’ll see I’ve defaced the happy water park goers on the cover for variety’s sake. Thank you for agreeing to serve as my culture champion. I appreciate you. The hemorrhoids have cooled to a dull burn, and if I rub my ass against the rough seat cushions in the conference rooms, I can get a little satisfaction. I don’t know why I was so nervous about this retreat, except that lingering trauma from an est seminar my girlfriend took me to in 1978. She became the chief financial officer of a fortune 500 company, and I’ve always wondered if I missed out because of my inability to be transformed by est. You seem like just the kind of asshole who could get into est. At work, I hear a lot of blibbityblahblah about Johnson, the shadow of a leader you cast. How Johnson stays curious on the mood elevator. Johnson who shot straight into the guys-referred-to-by-their-last-names club. You should go to est, Johnson—there’s no limit to your potential. I’m just warning you that they don’t let you take bathrooms breaks.

P.S. That doesn’t mean there’s something wrong with my prostate. Like I said, I get hemorrhoids. And yes, Shelley and Julio from purchasing are doing it. You have a sixth sense.

Thank you for agreeing to serve as my culture champion. I appreciate you.

Last night we wore our animal masks to a spontaneous end-of-seminar pool party. The tigers bought rounds of blue drinks on their corporate credit cards to make up for being at the top of the food chain. Everyone from headquarters was half naked, drunk, their masked heads bobbing in the water—like a scene from Caligula, but without the fornication.  The pool soothed my hemorrhoids and the drinks numbed my ankle. Even though the fattest, whitest flesh on my body was exposed, my donkey mask protected me. I finally understood why people get slutty on Halloween. I made a few donkey hee haws for good measure. When I get home from this airport Marriott I will put on this donkey mask and nothing else and come out of my bathroom and gallop toward my wife, my leader casting a very long shadow, like a man without a first name, a man who mimics a thing until he makes it so, a man who will bray right into that bed until my wife sees me for the wild animal that I am.

Melissa Yancy’s short fiction has appeared in One Story, Zyzzyva, Glimmer Train, Prairie Schooner, The Missouri Review, PANK, Barrelhouse and elsewhere. You can visit her online at www.melissayancy.com.