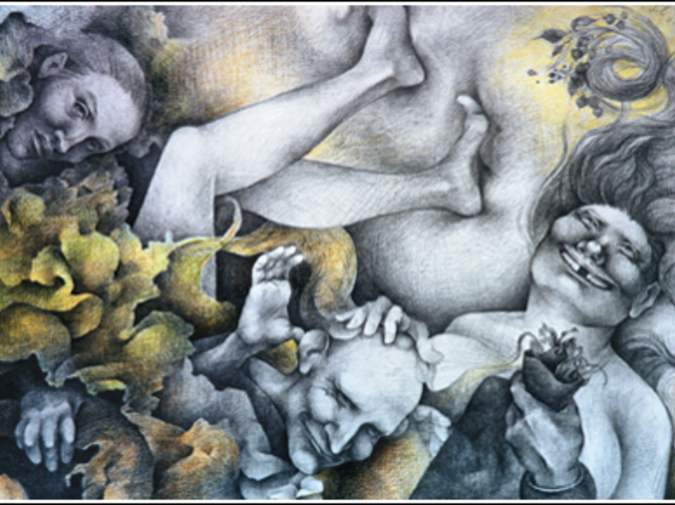 She had nine faces already, and each time she began to talk a new one was added. "How does she manage to do that?" he wondered, listening to her voice. It enveloped him like a magic sphere, distorting the image of the room and making him feel like an insect inside the dew. Letting out air bubbles, a few convex birds chirped in the window tank overfilled with the splashing skies. "What is she talking about, anyway," he thought, mesmerized by the growing number of her faces.

"It doesn't matter," she said, answering his thoughts.

She divided again, and he was instantly multiplied by the zero meaning of their conversation.

Walking Along the Beach

She was walking along the beach, her hair heaving like tidal waves in the setting sun.

"Why are you so sad," he asked, approaching her from the night side.

She glanced at him. The surf splashed out the light of the passing day.

"Can I get you something?" he asked.

"I don't know myself. Only someone who loves me does."

He took her palm and slightly raised it.

For a few moments she watched the setting sun cradled in the palm of her hand.

"Yes, this is what I want," she whispered, amazed.

And he went away, leaving deep traces on the darkening sand.

There were two shadows on the wall. One was his, another one — someone else's. Every time he switched on his bedside lamp the other shadow appeared right next to his. It frightened him, at first, but the stranger was silent and didn't do any harm. He eventually got used to it and didn't shiver anymore when it put its head on his own shadow's shoulder. He drank his tea, scrolled through newspapers, and watched the evening news while they were quietly holding hands.

The rains became more frequent, and one day he invited his old companion, the woolen blanket, to watch TV with him. It entered the room through the closet, greeting the shadows. The reflections of drops flashed on the wall, and his shadow opened the umbrella he left in the anteroom. He glanced out the window. A girl in the flat across pressed her face to the windowpane, peering into the dark. I wonder if she's looking for her shadow, he thought.

The rain beat against the window, smearing the girl's face and filling up the ditch between the houses. The drops danced in the room, reflected multiple times by the hardwood floors and the TV screen and the polished back of his bed.

The shadows snuggled up together, watching the man on a desert island of his bed, all alone in the midst of the torrential rains.

She was a bad, bad witch. Sooner or later she'll be punished, everyone thought, watching her accomplish her disgusting goals with the sweetest smile on her lips. Alas! She was always in a good mood, slept well, and had good dreams, a good appetite and an enviable figure. She lived a good long life, had a lot of good children who never upset her and strangers often wished her something good — good morning, or good evening, or good night. And she replied with confidence: "Thank you, I will."

She was such a witch!

The Past and the Future

The past was behind and the future was ahead.

He was newly divorced. He left the house, two cars and daily boredom to his former wife with two grown-up kids, both born on Christmas. She didn't mind him leaving. She wouldn't have even noticed his absence if hadn't asked her to sign the papers.

He was in love again. He bought a new house, two new cars, and he expected two babies by Christmas. Back to the future!

V. Ulea (Vera Zubarev) is a writer, a scholar, and a filmmaker. She teaches courses on decision-making in the University of Pennsylvania. She is the author of books of prose, poetry and literary criticism. Her book, About Angels, About God, About Poetry won The Top Book Award at the International Book Fair "Green Wave." Her cycle of poems, Letters from Another Planet was nominated for the Pushcart Prize. Her short stories and poetry have appeared in the Literary Review, RE:AL, Princeton Arts Review, Bitter Oleander, Sein und Werden, Dream People, Golden Visions, and other journals and magazines.