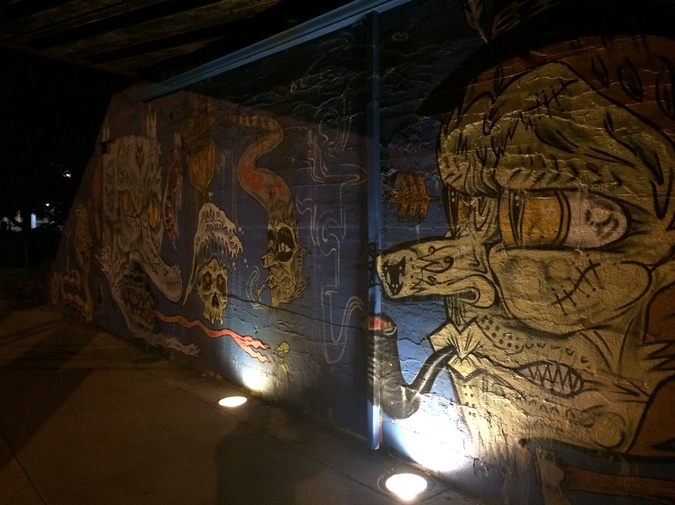 I hadn’t seen Kernel Ken since we both played a basement show ten years ago, but back then he didn’t use the name Kernel Ken. The name of his popcorn operation was a joke about a joke. Ken had played his music under the stage name Colonel Ken, a reference to the character Lieutenant Dan from Forrest Gump. Ken’s one-man band even played an opening set for actor Gary Sinise’s band at Ribfest one year, where he delivered an off-key National Anthem to an inattentive audience of red-faced hillbillies too drunk to boo him.

After his set at the basement show, a dude asked if Ken was a colonel in the army, and he said that he wasn’t, it was just his stage name, and the dude said, “That’s impersonating an officer. I could citizen’s arrest you right now.” Colonel Ken looked him in the face and said, “Do it,” then shotgunned a beer, half of it spilling onto his camo shirt, which he then removed. Ken moshed around during the other bands’ sets, including ours, pounding back more PBRs. Our band played right after him, and I can still feel the shirtless bear hug he attacked me with after I put my gear away and slipped back into the crowd.

In high school, I fronted a three-piece rock band where I played guitar, the only guitar, which was unfortunate because we were inspired by bands that played face-melting solos; I could only play rhythm parts, thumping power chord after power chord. I was also the singer, and this too was unfortunate. I was obsessed with alternative rock bands from the nineties, mostly Dinosaur Jr. I studied videos of every live performance that had been uploaded to YouTube, sweaty festival sets and polished Letterman appearances alike. I grew out my hair to look like J. Mascis, wore lots of grungy plaid shirts thrifted from the Salvation Army. I even affected a drawl onstage when I bantered between songs. Our band was called Dinosaur III, and just like Jurassic Park III, we were inferior to both Dinosaur properties that came before us. We had ambitions to play outside of Naperville, and we figured we could change the band’s name if we were given a cease and desist from a record label. The bassist once said if the word Dinosauria means “terrible lizard,” then we should have chosen the Ancient Greek word for “terrible band.”

Today, Kernel Ken sells kettle corn at the farmer’s market, or that’s what he does based on where I saw him for the first time in a decade. Ken was wearing oversized Aviators and a bandana, sweating through a T-shirt with a cartoon corncob on it while he handed bags of popcorn to people with tote bags. When I first saw him, I couldn’t remember any of his songs, so I didn’t say anything as I walked past his booth with my fiancée, the two of us back in town to celebrate my parents’ thirtieth wedding anniversary. I hadn’t been friends with Ken in high school because he was three years older than me, had graduated by the time our band started playing shows, but he was friends with a classmate’s older brother, the two of whom were also in a rock band, a more successful one, but the bar was low compared to us.

I hadn’t picked up my electric guitar in years. I spun You’re Living All Over Me on my record player every now and then, but other than that, the rock and roll years were behind me, as were they for the bassist and drummer of our band, which had been on “indefinite hiatus” since the three of us attended different colleges. Our band still had an extant Facebook page, but we hadn’t been contacted by any record labels about our name, which had disappointed us, because we wanted to be successful enough to be attacked by million-dollar legal teams.

Now, the drummer worked for a tech startup in the Bay Area, and the bassist worked for an architecture firm in Los Angeles. I hadn’t seen either of them in years. I transferred to a university downstate after two years at the community college, studied engineering, then moved to Chicago, fell in love, worked sixty-hour weeks, and only returned to the suburbs for the rare get-together that fit into my schedule, to visit my family for big life events or Christmas.

The first time all three band members were back home our freshman year of college was for Christmas. In our group chat, we had texted about trying to set up a show at a local dive bar when we would all be back again for spring break. We practiced in my parents’ basement, then started talking, set our instruments on the floor, talked for hours until we were hungry, and then drove to an IHOP. That was the last official practice of Dinosaur III. No more shows either. The diner had closed, as I learned when I was back this time, but the sign’s still there, the parking lot empty. I wasn’t the type of person who romanticized high school. I had no interest in being a rock star anymore. I don’t know if I had ever been interested in being one. I read Our Band Could Read Your Life in high school, and the life of a band on tour sounded fun, but we never tried to make money from our music. Our band released an album online, recorded in my parents’ basement on low-quality equipment, that no one outside of our friends and families paid a dollar for. “I can tell you’re having fun,” my mother had said after she listened to the first song, and I don’t think she listened to the other nine.

The last gig we played was the high school talent show our senior year where we were one of ten acts.  At the end of the night, we won third place, not bad for a band that only practiced once a week. The bronze earned us a gift card donated by a local restaurant, its value enough for the three of us to split an appetizer, then we said fuck it and all ordered entrees, drinks, and desserts. By the end of the dinner, our check ballooned to more than a hundred dollars, even after the gift card had been deducted. This is the life of a rock star, I thought. The bassist wanted to dine and ditch, but the owner of the restaurant was the father of a girl in our grade, so I figured that was too risky, that he would look through her yearbooks and identify the three of us. I didn’t want to trash a hotel room, let alone steal an order of fries from a family-owned restaurant. I pleaded that we had to pay the bill, because I planned to attend the nearby community college after high school, and I didn’t want to be a persona non grata at the IHOP for the next two years. “You’re no fun,” the bassist said to me, pulling out a hand-rolled cigarette and putting it between his lips, eager to smoke in the parking lot, then he didn’t tip, so I doubled mine, left a ten-dollar bill on the table for our server. The bassist would have been the getaway driver, and I bet it would have been fun, but I feared being tackled by one of the busboys, many of whom were football players.

Back in high school, my friends and I leaned into being a joke band, but Ken, he was completely serious when he played, hushed the crowd when there were too many talkers during his first song. There were five bands on the bill that night at the basement show, Ken playing first, and then us, and then all the real bands that had CDs for sale. Ken pounded out three novelty songs on his busted up acoustic guitar, looking like a knock-off Daniel Johnston. I tried to remember the songs he played. I only remembered some lyrics after we had been at the farmer’s market for more than an hour. We must have passed Kernel Ken at least three times, hustling another bag of kettle corn to a customer every time I looked over at him. I only remembered one song. I hummed the opening notes when I walked past his booth one last time on the way back to my car. It was a song that started with the lyrics: I have no expectations. Back then, none of us did.

Zachary Kocanda's short fiction has recently appeared in the Oyez Review and Another Chicago Magazine. He lives in Illinois. Find his work at zacharykocanda.com.