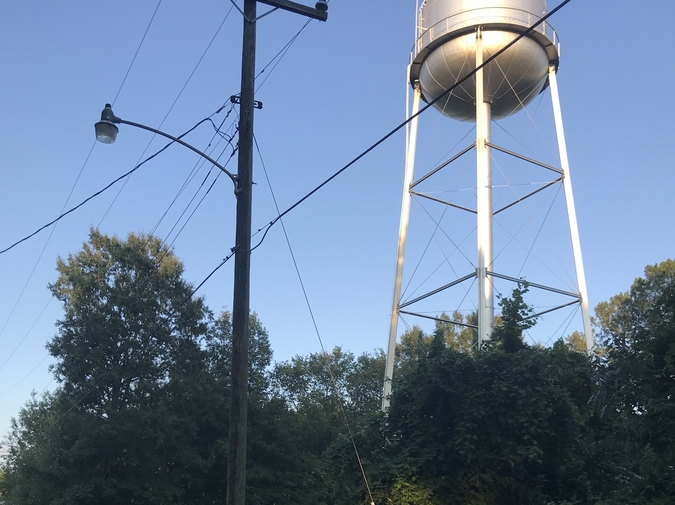 We buried her in the backyard.

She’s alive. She just did a figure eight through my legs and now she’s sitting on the floor cleaning herself. She’s a kitten and she’s alive.

I always do this. I never want to tell the truth but I always tell the truth because I think I’m nice or because I have nothing better to do. But the mattress really did collapse through the frame. It’s a bad bed. We have two beds and that’s the bad one. And by “we” I mean Anne and me. The bad bed is downstairs and the less bad bed is upstairs. We don’t have a good bed.

I thought about something that bothers me. When people say that an inanimate object “lives” somewhere. I’m not making myself clear. Like when someone is showing you their kitchen and they say, “That’s our blender. The blender lives in here.” Or they’re making you a cup of coffee and they say, “If you want sugar, the sugar lives in that cabinet,” and then they point to the cabinet where the sugar lives. I wish people wouldn’t do that.

Here’s the deal. Anne isn’t home. She’s getting groceries. We got into a fight. I showed her a story of mine and she didn’t like the way it ended. She said it was a trick. I told her she was wrong and that we didn’t read the same kinds of books anyway. She’s getting groceries. We’re out of eggs and deli meat and nuts and fruit and cat litter. She’ll be back soon. And we won’t talk about the fight. I’ll write another story and I won’t show it to her.

She made a grocery list but she forgot to take it with her. She does this. I pick up the list. At the top of the piece of paper is the emblem from the company where she works. She deals in premiums and policies and deductibles and we hate the company where she works. Her coworkers believe Anne and I are living in sin. We live in a house together and have sex and we are not married. I leave the list on the kitchen counter and go into the living room.

I watch Dennison through the living room window. He can’t see me. Dennison lives across the street in a house that I don’t understand. He has a metal pole in his driveway and at the top of the pole is a basketball hoop. He has a sign next to his door that says No Trespassing. I want to tell him that he doesn’t need the sign. He’s on his porch.

I have other neighbors, but Dennison is the only one I pay attention to. He scratches his cheek.

Charles lives next door. We’ve lived here for over a year and never spoken a word to him. He has a goatee. He won’t wave to us. That’s not true. He waved to me once. I took out the trash one morning, before I went to work. He was in his yard. Pacing back and forth across the lawn. He had a rifle slung over his back and he was talking into a cell phone. He raised his hand and I raised my hand and then went back inside the house. The smell of our garbage made me want to wash my hands.

I am back in the kitchen. I have to clean the skillet. It has a layer of crust on its surface from whatever Anne made for dinner last night. She cooked ground turkey and onions and something else. I ate something else.

I sit down on the kitchen floor. There is cat hair and crumbs on the floor. There is sand from the time we drove three and a half hours to go to the beach. We brought it back with us.

I hear her car in the gravel outside and then I see it through the kitchen window. It’s her car but she shares it with me. I hope I don’t break it. I need it to get to work.

At work I wear a white coat.

Sometimes I wear my white coat home from work because it needs to be washed. I spill coffee on it or spaghetti sauce when I bring spaghetti for lunch or I forget to wear deodorant. But when I wear it home, and I get out of the car in our driveway, I am afraid my neighbors will see me and think that I am a pharmacist and keep pills in my house or that I am a doctor and that I am rich and that I have valuable things in my house worth stealing. From the outside, our house looks abandoned. The white paint is chipping and flaking off and the tin roof is rusted. We want to keep it that way.

Anne gets out of the car. She has a brown shopping bag under each arm. She has blonde hair and blue eyes which is the opposite of what I have. I dry the skillet with a paper towel. The skillet is clean. The paper towel is gray and black and it goes into the trash bin under the sink. She comes inside the house and lets out the cats and unloads the groceries.

She puts the eggs in the refrigerator.

“Did you know that in France they don’t refrigerate their eggs,” she says.

“I’ve never been to France. I want to go, but I’ve never been able to go. But yes. I did know that. A friend told me that a long time ago. About the eggs. I’m not hearing that for the first time right now. What did you get?”

“I don’t even know why I want to go to France. What would I do in France? I’d go to bookstores.” I uncross my arms. I didn’t realize they were crossed until I uncrossed them. Her head is in the refrigerator. She puts the deli meat in the deli meat drawer. “Why did they give you two bags for just four items?” She reemerges.

She goes outside to watch the cats. She doesn’t want anything to happen to them.

I fill the kettle with water.

She comes back inside.

“I forgot to get cat litter,” she says.

I put the kettle on the stove and Anne goes back outside and I go into the living room to look at Dennison. We don’t have curtains. We have brittle plastic blinds, broken off in places that let in sunlight. I pull back the curtains to look at him. The curtains are blue and are embroidered with pictures of hummingbirds and flowers.

Dennison isn’t on his porch anymore. I don’t talk to many people in a day and I don’t think he does either. Sometimes Anne and I go to the only restaurant in town so that we can feel like we’re part of something. But we don’t do that often. The gravy comes out of plastic packets and the food comes from cans.

I go back into the kitchen. The water is boiling. I make coffee for both of us. I bring her a cup. She’s on the front porch. We drink our coffee. Then we go into the house and she makes dinner and I stand around, in her way, occasionally stirring what’s in the skillet. It’s ground turkey and spinach and mushrooms and feta cheese. We scrape it out of the skillet and into bowls and we eat.

When we’re done eating we go for a walk. We walk by the water tower around the corner from our house. I look up at it. It’s up in the sky. I look at the ladder. We keep walking. We walk by Dennison’s house and I wonder what his name is. And I wonder what it looks like inside his house. It looks smaller than ours. And then there are more houses and trailers and broken swing sets and toys in the yards and the old house Anne used to live in, the one she grew up in, before it got taken away from her mom. It’s a nice house. We try to take a picture of it but it doesn’t look as good in any of the pictures.

We pass by the water tower again.

“You said you’ve been up there,” I say. I point to the top of the water tower. I look at the ladder.

“Me and Austin and Josh used to go up there. A while ago.”

“We were tipsy.” She laughs.

I look at the ladder.

We’re almost home. I can see I left the living room light on.

When we get inside I will check to make sure I turned off the stove and I will turn on my computer and watch the rest of a baseball game and I will stay up later than Anne. She will remember that we left the cats outside and she will find them in the yard and bring them in and brush her teeth and get ready for bed and I will be tired tomorrow.

Joseph Grantham is the author of Tom Sawyer (CCM Press, 2018) and Raking Leaves (Holler Presents, 2019). He lives in America.