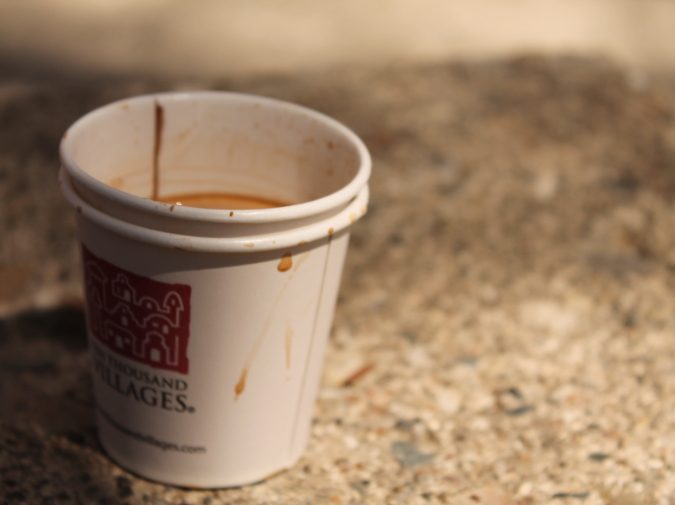 Luis was walking home from work one evening when a man stepped in front of him, blocking his way on the sidewalk.

The man was dressed in a black coat and he was wearing a tan hat.

“I have one word for you,” the man said.

Luis tried to guess the word—“Regicide?”

Just then, it began to rain heavily so the two of them hurried beneath a tree.

They were about to resume their conversation when a man emerged from a house nearby—“Get off my property!” this man shouted.

When they didn’t, another much larger version of the man emerged from the same house—“I said, ‘Get off my property!’”

The appearance of this second man sent them running from the tree.

Luckily for them, there was a little cafe at the corner where they could take refuge.

The debt collector bought himself a coffee while Luis didn’t buy himself anything.

They sat down at a table and the debt collector said, “The reason I stopped you on the sidewalk is that you owe a large amount of debt.”

Luis laughed—“And I try not to think about it, otherwise I’ll go crazy!”

“Can you guess how much you owe?”

“You should have guessed one hundred and twenty thousand dollars,” the debt collector said.

“Because that is the correct answer.”

Meanwhile, it had continued to rain, so much that the streets outside were becoming flooded—cars were stalling out in the high waters.

“I work for a collection agency,” the debt collector went on, “and I’ve been ordered to begin collecting the money you owe,” then he opened his jacket and showed Luis a gun.

Alarmed, Luis asked, “Are you going shoot me?”

“No,” the debt collector said, “I just wanted to show you my new gun.”

Despite this, Luis grabbed for the gun, lunging across the table to apprehend it, but the man pushed him away.

Luis could not help himself—he got up, walked around the table, tried to push the man from his seat.

Luis and the man exchanged several blows before one of the café workers asked them to leave.

Through the heavy rain, they searched for a new café where they might continue their conversation.

Finally, they stumbled upon a little unmarked opening in the earth, which they mistook for a café, but which in fact was a cave.

Just past the entrance of the cave was a guide, who seemed surprised to see them—“No one comes here anymore.”

“Do you have coffee?” the debt collector asked.

The guide said he did not have any coffee.

Then he said that the cave had once been host to hundreds, if not thousands, of little brown bats—“They would be hanging all over,” he said, pointing towards the cave’s ceiling, “but in recent years they began to die off—no one knows why, but now there aren’t any left.”

“There’s usually a joke I tell here,” the guide said, “but now I can’t remember it.”

“Do you have coffee?” the debt collector asked again.

Then he gave them directions to the nearest café.

It was tough wading through the flooded street—up the street a ways, people were standing on their cars, waiting to be rescued.

Eventually, they found a café—it was the same one they had been in before, but they were so soaked that no one recognized them.

The debt collector bought himself another coffee while again Luis refrained.

“You’ve got to purchase something,” the debt collector said.

Feeling guilty, Luis went to the counter to order a coffee.

When he came back, he was holding a very large cup of coffee, which he had spilled all over his pants.

This explained why he had been screaming so much on his walk back to the table.

The debt collector said, “You must begin to pay your debt or they will start to repossess what you own.”

“Well, luckily, I don’t own anything,” Luis said, smiling.

The debt collector said, “Then they will buy things for you so that briefly you will own something.”

“That would be great,” Luis said. “I’ve always wanted to own things.”

“But then they will take everything away, so you won’t have anything again.”

Luis thought for a moment—“But then I’ll have paid off what I owe, so that’s a good thing—I’ll be debt free.”

The debt collector shook his head—“But then you will owe for the things they have bought you, so that’s terrible.”

Luis got a thoughtful look—“It’s a neat circle, isn’t it?”

“I’m afraid I’ll never have the money to pay off that loan,” Luis said, dejectedly.

The debt collector passed Luis some paperwork—“A lot of people, to pay off their debts, come to work for the collection agency.”

“And I was a doctor,” the debt collector said. “Everybody is something at some point.”

“I feel like I would be letting my students down,” Luis said. “This isn’t how it’s supposed to go.”

“Look, I left in the middle of a surgery I was performing—I became so overwhelmed by the magnitude of my debt,” the debt collector said.

Luis started to get tearful—“My students.”

The debt collector tried to console Luis—he patted him on the shoulder with his gun.

The appearance of the gun caused alarm in the café and Luis and the debt collector were asked to leave again.

Outside, the rain had finally stopped, the flood gone as quickly as it had appeared.

In the street were a dozen abandoned cars—they saw the guide from the cave rummaging through one of them.

The debt collector told Luis, “I can teach you the ropes, how to shadow someone, like I did with you.”

“I’ve never been able to sneak up on anybody,” Luis said. “Too clumsy”—he nodded towards the coffee stains all over his pants.

“The secret is to forget yourself,” the debt collector said. “To give yourself over to the other person completely.”

But Luis was closing his eyes—“Do you see me?”

“You are trying to make me go away,” the debt collector said.

“No, I am making myself your shadow.”

The debt collector said, “That’s not how it works—by closing your eyes—what you’re doing is peekaboo.”

“But you can’t see me anymore, can you?” Luis said.