Dear Liza, In What Shall We Carry The Stone? 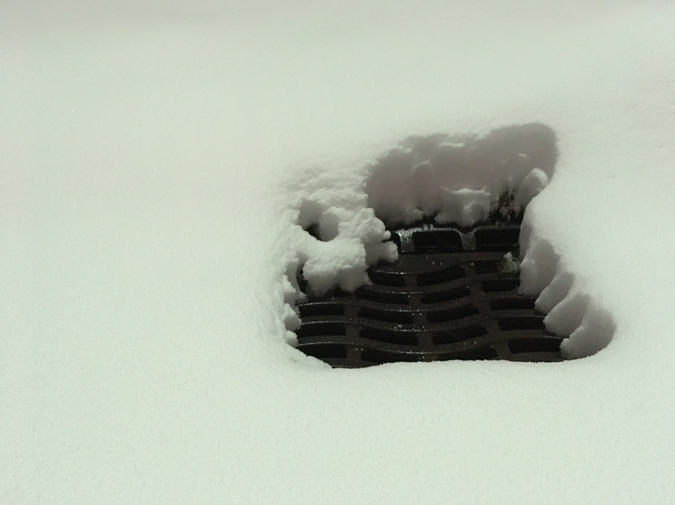 The couple in the back of the shuttle is trouble. We’re standstill on highway 5, and these two want everyone to sing.

It was obvious the second I saw them—shuffling across the casino lobby in blue robes, holding hands, flashing the blank smiles of the obsessed—that I should’ve called off work. Beneath the robe, the woman carried some lump strapped to her chest, and at first I worried it was a bomb. But now, as she begins to coach us, I half-hope it is one.

“If you aren’t comfortable emptying yourself via your vocal cords,” she announces to my full van, “How about you just hum.”

It’s me driving, a silent Indian gentleman in shotgun, a trio of teens dead their phones in the first row, businesswomen sharing a Snickers in the middle, a haggard busker named Merv stretched out on the floor asleep atop his guitar case, and then, in the way-back, the impossible couple in blue, leading us in a folk song I haven’t heard since elementary school.

“There’s a hole in our bucket, Dear Liza,” the man sings.

“There’s a hole in our bucket, Dear Liza.”

I slam the center of the steering wheel—the loud, sour note starts a chain reaction across the congestion. The couple claps, interpreting this chorus of horns to be a kind of cosmic, vehicular cheering-on. Their arms wrap around one another’s shoulders, like the beloved might float off if not pinned to earth. Our destination is the Mall of America, where most catch a train to the airport. Though I’ll wager these singers stay and shop for minerals, or incense, or stand by escalators and hand out pamphlets.

We’re all going to be late, for everything, and the people we keep waiting will add this to their mental list of evidence that we are not careful or observant or accountable. And singing isn’t going to change that. In fact, singing in a van can be dangerous. As a kid, in another town, with another name, I was aboard a school bus that crashed—the driver later said in an interview—not due to snow, but because the kids had all been belting this Prince song. He couldn’t focus. The boy beside me went over the seat, and into the ceiling, and the bone that shot out of his leg was bright as a breaking wave.

“Beautiful,” the man in the couple tells the van. I roll us half a tire forward. The businesswomen work at a knot of headphones. Merv’s up now, unclasping his case. The teens have their phones out in front of them, faking like they’re taking selfies, filming the nonsense behind them. A mean motorcycle cuts between the rows of traffic like a surgeon. I want to open my door. There’s a lot you can see from a rearview mirror, and there’s a lot you can’t.

A bald eagle flies over the line of traffic and I miss it, because the man in shotgun raises his hand. Good God. He’s signaling for them to restart the song. Four fingers, three, two…one.

“With what shall I fix it?”

“Shut the fuck up!” I say. If I die today, who will feed my corn snake?

Then, the guitar starts. Stairway to Heaven, the only song Merv knows. Many times I’ve given him this ride for free, as long as he’s silent and doesn’t take up a seat. I promise—I’m no misanthrope. The shuttle can be a place of peace for me, one of the few. I like the murmur of public radio, the volume low enough to fuzz out the words flood, war, donate, or crash, but loud enough to get a kind of quiet colorless noise. I like wrapping around the off-ramp in one long easy turn, the heft of the shuttle’s weight shifting when the road spits out straight, the bones of my arm easing into place. I like swallows that fly right alongside my window, eyeing me for a second before they veer off.

Apparently what they need to fix the bucket is straw. I grab my bottle of water, but it’s all out. Now the straw needs to be cut. All the stuck vehicles sit in suspense. Always my windshield is smudged to hell. I pump the wiper juice lever, hoping to smear it all away. But all the stains, all the traffic, all my passengers with all their noise remain.

Some people just act like everything is beautiful. I’m not saying beauty doesn’t exist—I’ve known it well. One morning I saw an apple rolling down the center of a road in Saint Paul. It had been bitten exactly once. There were no other cars on the street. That apple just tumbled along at its own natural speed. I pulled over to watch it pass. What I’m saying is I know how to look, how to see. For example, there’s a car in front smattered with all-caps bumper stickers: FOLLOW YR BLISS / LOVE IS LOVE / COEXIST / FUR IS MURDER / GORE 2000 / IF YOU LIVED HERE YOU’D BE HOME RIGHT NOW.

“With what should we cut it? Dear Liza.”

And now the kids behind me stomp their feet on beat. The businesswomen, still pulling at the earphone tangle, now use their teeth. Merv croons, “And my spirit is crying for leaving.”

In need of a weapon, I crank the volume on a pop-country station. The song claims that a foot fetish is a brave form of patriotism—We’ll put a boot in your ass—and I make sure the pilots can hear it at the airport. Everything grates. In the rearview, I see the couple’s mouths still open, heads tilted to the sky. The businesswomen give up and join the dirge of the unfixable bucket.

“The axe is too dull,” they all sing together, and goddamn it, they’re in tune.

With that I throw the van into park, push open my door, climb out, and walk down the center of the highway. I pass cars sitting still, drivers rattling their fists at me like swords.

The sun comes head on, and I step straight down the dotted white line. What comes to me is not the apple, but the time I wrecked that school bus full of students. It wasn’t a Prince song they were singing, but something by TLC. It wasn’t a kid’s leg, but my arm. Not snow—rain. I never gave an interview because I limped off in shock, in hell, in the median, leaving the whole bus in the smoke, in the scream, in the ditch-water creeping up in the downpour.

I can’t hear the singers in my van anymore, but I know their plan to sharpen the axe with a stone won’t work. Because the stone is too dry. Not to mention how heavy.

In a minute the lanes begin to inch, and soon the congested cars start rolling, revving, flowing around me. They honk. I wave. And soon, here’s my shuttle coming up behind, the Indian man in my driver’s seat, windows down, head turned toward me, singing, “With water, Dear Henry!”

“Dear God,” I say and try to open the passenger door. But it’s locked. They all are.

The vehicle, my vehicle, keeps rolling forward until I fall behind it.

There’s a truck, a bus, a town, a history bearing down behind me as I chase my van on foot. Am I getting closer?

In the back, the song-woman finds the trunk’s release button, and it yawns open, and I sprint, and I leap into the stowaway space. It’s empty back here because nobody’s brought any luggage. I want to know: where are we even going? The woman leans over the seat, her son in her arms, and looks down at me.

“We don’t,” she sings, handing me literature. “We just stop trying to fill it with water.”

Tyler Barton is a cofounder of FEAR NO LIT, the organization responsible for the 2017 Submerging Writer Fellowship. He works as the assistant to the director of the Native American Literature Symposium, hosts the flash fiction podcast Show Your Work, and teaches writing to seniors in an assisted living facility. His stories can be found (or are forthcoming) in The Iowa Review, Gulf Coast, Gigantic Sequins, Waxwing and others. Find him at tsbarton.com or @goftyler.