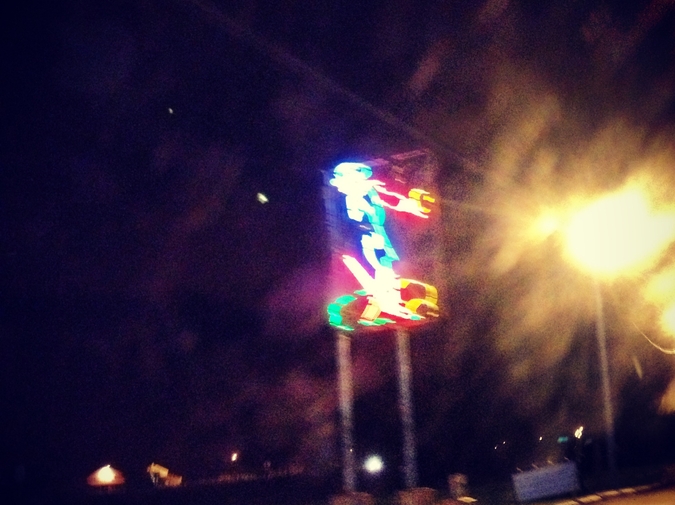 On the night I left your apartment, my phone died. I was planning to reread our last few texts, you know, the ones where you asked me to come over so we could talk. Well, I came over. We talked. We even had sex, sort of. Or at least, you were inside me, but you didn’t finish. And neither did our conversation. And I was so confused because your window was open, and it was a January night in New York, and you paid so much for your heating—or at least that’s what you’d always told me. Whenever I used to open your window to smoke, you always walked over and closed it, and took my cigarette, and waggled it in my face, and said, “One cigarette for one kiss,” which was an effective threat, since I so enjoyed your kisses, and so I’d always stub it out in the ashtray you always kept for me, next to the bed. And there it was then, that open window, gaping at me, and I gaped back.

On the night I left your apartment my phone was dead, so I made a list in my head of all the strange things I’d seen earlier that day, things that should have alerted me to the fact that we’d break up: a three-legged dog, a glass animal on the sidewalk, an emaciated blonde woman devouring a sandwich, a man missing a tooth explaining the process of pasteurization to a woman on a subway platform, but not in the context of milk, and instead in the context of a piece of art—“You see, they killed everything, to be safe, they killed the good and the bad, but in so doing, they ended up with neither good nor bad, and they ruined it”—and the woman inched away, unsettled, but then he said something she found interesting, and she lurched back in his direction, and he got a text from his mom, he said, who was in Hawaii, and on a boat. He revealed that he was actually from Hawaii, and I was listening, and so was the woman he was trying so hard to impress. “Are you going back to Hawaii any time soon?” the woman asked, and it was obvious he had her hooked. I was hooked, too, somehow. “You know, I still see and hear the ocean when I close my eyes, so I guess when that stops, I’ll have to go back,” he mused, and then it was my stop, or really your stop, and then I was pushing through the turnstile, and putting on chap stick, and climbing up the stairs to the street, and tucking in my scarf against the bitter wind, and walking to your front door, and pressing the button for your apartment, and then you were buzzing me in, and then we were breaking up. More or less.

On the night I left your apartment, my phone was dead, and the man sitting next to me on the subway smelled really bad, and I contemplated getting up and moving seats, because it was really bad, even for New York, but then I noticed he had a notebook and a pen. And as you know, I was feeling bold that night. I was feeling particularly bold when I told you to go fuck yourself. I’m not sure if I really meant it, though—I just knew it was the sort of thing a girl in my situation would probably say to the guy who broke up with her. Anyway, I was feeling high on the after-effects of our breakup, and so I asked the smelly guy if I could, perhaps, snag a piece of paper from his notebook, and perhaps a pen, if he had an extra one. The smelly man took a moment to register that I was, in fact, talking to him, and then he grunted, and ripped a page from his notebook, and handed me the pen. You would have been proud of this exchange. You were always daring me to do things like this in public, to surprise myself. I wondered briefly if the man had also been given a similar pep talk, one that would enable him to interact with strangers on the subway, and share things with them.

I held the pen carefully. I didn’t even wonder about where it had been, like I’d always done with dollar bills. Like that time we were on our third real date, and you finally offered to pay for my drinks—well, I suppose ‘finally’ is not the right word, since I’d insisted that we split the check on our first and second dates, as to avoid the potential awkwardness of me assuming it was a date, and you not thinking it was a date, and then me waiting for you to pay the bill, and you having to tell me that, no, actually, this was just a few drinks between friends. I remember you paid the bartender on that third date with a fifty-dollar bill. I raised my eyebrows and you saw me raise them and laughed and said, “I know how this looks, and no, this is probably the only fifty-dollar bill I’ve ever had,” which was a relief, since you were a jazz drummer, and you being a jazz drummer was part of your appeal, and jazz drummers are supposed to be broke, and skinny, and sexy, and strong in the arms. I said to you, then, I said, “Do you ever think about how many people have touched that fifty dollar bill?” And then it was your turn to raise your eyebrows at me.

I held the smelly man’s pen and then I plucked off the cap and put it to paper. I made more lists. I wrote down all the WiFi passwords to my favorite coffee shops. The first password I remembered was from that café diagonal from your apartment. I scratched it out. I wouldn’t need it.

I made a list of all the graduate writing programs I didn’t get into.

I made a list of all the men I’d ever kissed. They were all important. They made me feel desirable at moments when I desperately needed to feel that way. I wished I could show you the list, to prove to you that I was loved, again and again. I think we are all loved in that millisecond when our lips touch someone else’s lips for the first time. We may never realize it was even there, but it was—or at least the potential for love was there, which is almost the same thing.

I made a list of my favorite bars. Output, Dead Poet, Fat Baby, No Fun, The Cow—we went dancing at some, or snuggled, and then at the others I watched you from a stool, rum n’ coke in hand, as you drummed. There was a bassist, and sometimes a pianist, but I wouldn’t ever really notice them. You’d close your eyes and bend down to your cymbals, as if they were whispering to you, and I’d instinctively sway in my seat, bending in my own way, wanting to hear what you heard.

I made a list of airports I’d been to. There were only a few. While all my friends last year were studying abroad in Europe, or Australia, or South America, I was here, with you, thinking about the future. You were older. You were always older. We met when I was eighteen and you were twenty-seven and I was holding a fake ID in a bar and attempting to make eye contact with you, the attractive drummer behind the drum-set.

When I stayed in the city for undergrad, I promised you that it was my decision, that I’d made it for myself. You said something like, “We are at different phases of our lives,” but you seemed happy that I was there, and we fell into bed one night in the summer, and it didn’t seem to matter that it was true.

I thought you would say it again during our break-up, when you were thirty-one and I was twenty-two and finally feeling old enough. But you said something new, you said—“Emma, I can’t do this, you always want me to do something wrong so you have something to write about, you want me to be manipulative, and mysterious, and out of your reach, but I’m right here,” and I shook my head, because it was a cruel thing to say, a dig at me and a dig at my writing and a dig at everything that I ever believed to be true.

“Go fuck yourself,” I said to you. And you smiled sadly.

I tried to make a list of things I believed to be true, but I couldn’t think of much. My head was spinning.

I made a list of all my favorite anagrams. Listen, silent; heart, hater, earth, and then there’s my favorite, Princess Diana, I end as car spin, and I think I shared it with you once, and we both laughed, and then felt terribly guilty for having laughed.

I made a list of books I should read, and movies I should see, because I would need something time-consuming, now that I could no longer spend my time with you.

My lists were dumb. They were indulgent. They were poor distractions. The smelly man seemed to think so too because as we approached 96th, and the train’s wheels shrieked, and the walls rattled, he asked for his pen back. He was very polite. He wished me luck in my life.

Caitlin Barasch is currently a senior studying English & Creative Writing at Colorado College. She happily splits her time between the Rocky Mountains and her hometown of NYC. Her work has appeared previously in Word Riot, OnEarth, Boston Literary Magazine, 4'33", and The Knicknackery.