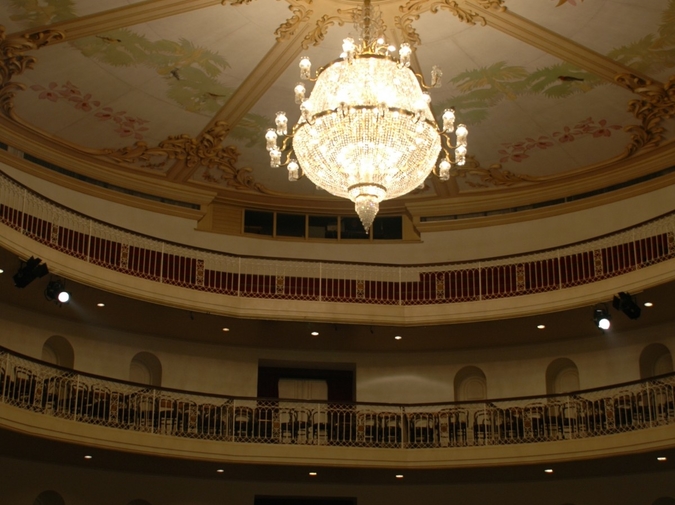 When I was ten years old – a rat of a girl with black-buzzed hair and knock-knees, my unwieldiness belied by the ill fit of my school uniform – I stood in a famous concert hall under a chandelier with my father. The chandelier, golden fingers offering blue crystal capsules, was weightless. It was the most expensive thing I had ever seen, but this was what most gripped my mind: the levity. A cumbersome child, plush in the center like slow-rising pastry, I could only imagine how it must feel. To float. Of course, the times were themselves heavy. It often felt, growing up, as though everything was conspiring to drive me into the ground. My father, slim and splintery like driftwood, looked up at the dangling glass. He had a way of saying things as though he were in the clouds, sermonizing to no one, but I always listened.

His voice, crisp like apple vodka, poured into the September air. “The chandelier is decadent, yes, but its existence is an act of defiance,” he said, raising an ink-stained finger. “It is delicate, doomed by its delicacy. It will break. This is certain. And yet, until then, it insists on its noble fragility. It will not compromise its vision to suit the environment.”

My father was a typographer, like his father, but he spoke like an orator. This exhausted my mother, who spoke in three-syllable sentences. Whether she was born this way or learned silence for survival, I will never know. Her parents were both taken when she was very young, imprisoned or killed or both. Sometimes I imagine my mother as a girl, waiting by the door for their return. She learned very early that parents are ants, not gods. For glossy mites swarming between the government’s toes, any illusion of autonomy is swiftly shattered by violence.

During the revolution, when correspondence was consumed by the state, my parents popularized an original font. I’m sure you would recognize it if you saw it, in the way that one recognizes the half-forgotten tune of choir songs from primary school. For obvious reasons, I can’t specify which revolution, nor where, nor the name of the font, but whichever revolution you’re picturing – yes, that one. I’ll call the font Chandelier. The Chandelier typeface, marked by its operatic swashes and depressive descenders, came about through necessary genius. As my father used to say, anyone can be Einstein with a gun to their wife’s head. His wife, my mother, was the one who dreamed up the encryption. The idea was his but she was, ironically, the linguist.

Back then, every letter that made it to the addressee was sliced open, heavily redacted, and resealed. The people had tried everything: the Caesar shift, Morse code, all manner of hieroglyphs. Nothing escaped detection. My father, who spent long nights after his shifts at the print shop designing new scripts, decided to pen a font that carried the code in its flourishes. My mother sat with him at his barely-lit desk, brain-gray moths whispering against their cheekbones while they worked. The moon peered through the one window like an opalescent informer. I watched from my bed while my father’s hand fluttered over paper and my mother’s face soured in concentration. Some nights, my only friend Q – a gaunt boy with saucepan eyes who lived downstairs – would join us. Q’s parents worked in the factory with my mother and were the first people to hear about our font. It was simple, really. The joints, where the stroke of an L met the stem, were subtly bulbed, as were the apertures of every S. One bulb in a word was yes; two or more meant no. The swashes, which shot upward like stars, indicated tone. One swash in a word was a question or uncertainty; two or more indicated a statement. After this point, it grew a bit more intricate, with nuances in shape and pattern corresponding to the most indispensible vowels and consonants.

The success rate was marvelous. For five years, the people were able to conceal messages in brief telegrams praising the regime. Do not go back home. No, the book was not burned. Yes, I am still with Grandmother. Do you know where my son has gone? The font spread well beyond the bounds of our town, replicated by typists six cities away. My parents, high on the rush of subversion, were the closest to happy I ever saw them during those years. They indulged in the only alcohol available at the time, a viscous wine that bit the tongue, and sometimes they brought me home fine-sliced pink bread, dyed with red chemicals, from the small bakery in town. I would split the loaf with Q, making him eat his whole half in front of me so I knew the fat would go to his bones. One snow-struck night, my father lifted me out of bed and forced me into a stilted waltz, lunging his spindly legs into strange squares and laughing in baritone. His trusty typewriter, black-glazed beast with letters for eyes, kept watch.

Of course, it could not last. The heavy foot descended, razing our little world to dirt. They say the mole was a child. A young boy with a mud-swamped head who turned on his own parents. They say he was angry that they refused to enlist him in the military academy and could never afford to buy him sweets. The truth, like the letters, is lost to time. Almost overnight, arrests swept the region. Anyone confirmed or rumored to have written or received a message in Chandelier vanished into the mouth of the government, chewed and swallowed. The last time I saw my parents, my mother was wearing her obsidian hair in two braids like a schoolgirl and my father was resting his head on her lap. In the morning, they were gone.

The thing no one thinks about when it comes to ants is that they crawled beside dinosaurs. They traced the veins of leaves sinewy as limbs. Like the chandelier, ants are persistent in their fragility, but they are not similarly doomed. Stamp out one and the colony still hums below. After the arrests, I didn’t wait by the door. I found Q, the only reliable person left in my building, and through a backward channel of Chandelier allegiances, we made it across the border into the hills. Forty years later, I still have one sentence in authentic Chandelier: a slow-typed line on a scrap of paper that I keep framed above the mantle in my mountainside cottage. One of those first insomniac nights of invention, my father typed it for me and placed it under my pillow. In the morning, his eyes lasered with fatigue, he translated it, smiling as he pointed out the secret balls and notches. “I,” he said, finger on the taut terminal of a T. “Love,” three gossamer E’s. You.

Natasha Ayaz is a Pakistani-American fiction writer and proud alum of Bard College and the Bread Loaf Writers' Workshop. Her work has appeared in publications including Narrative Magazine, where she was a finalist in the Winter Story Contest and a recipient of the Top Five Stories award for 2020-2021, The Louisville Review, and Blue Earth Review, where she was the winner of the 2020 Flash Fiction Contest. She reads for The Common in her free time.