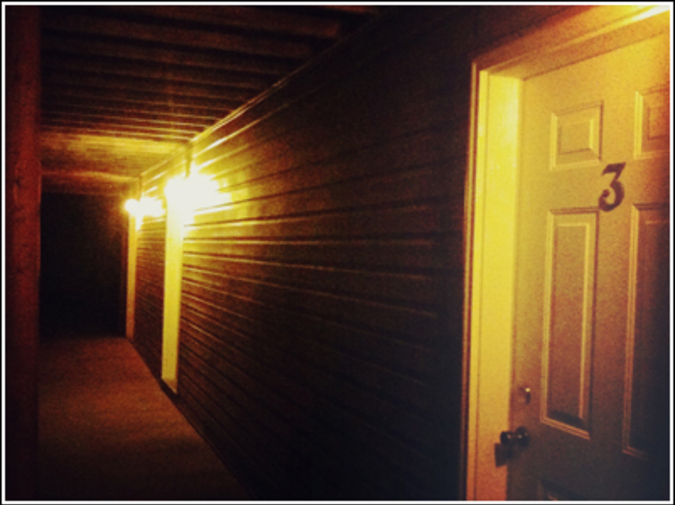 My father told me tollbooths were drive-thru dentists. The orthodontists were the lanes labeled EXACT CHANGE ONLY. "They change your teeth," he said, "until they're exact."

I cranked down the backseat window and unbuckled. Into each side of my mouth, I stuck two fingers and spread my lips apart then leaned out. In his side mirror, my gums and teeth glistened with spit. 35¢. Sometimes the workers stuck out their tongues. Some ballooned their cheeks and monkey-pulled their ears that, backlit by sun, glowed something alien, purple-veined and burned. Others, like this woman with long gold fingernails, never turned to look at me at all. She stared down the line of cars behind us while she clawed coins from the drawer.

If the arm lifted, and it always did, my smile was still perfect.

We were going to Kentucky for vacation. I'd always thought there were states people lived in and others to visit. We lived in Tennessee, and every vacation we'd taken was to Florida. I was sure my father was mixed up.

"Then why're there motels in Kentucky?"

I hadn't rolled the window up. In the wind, my hair began to wriggle loose from the tight pony my mother had given me that morning before he picked me up. I looked at the back of his neck through the gap between the seat and the headrest where small brown hairs pushed through the skin, almost like splinters. His clip-on shades were in the rearview again.

He twisted his hands on the steering wheel so they squeaked. He was a cop and the car was a rental. He couldn't drive his city issue outside the tri-counties area. When I asked him what would happen if he did, he said the steering wheel would lock and the car would take over and beeline it all the way back home where it ought to be.

All I could think about was the electric collar Jessie wore down at our old house in Red Bank, how I pried it off one day and put it around my own neck. I ran fast as I could toward Lacy Simpson's house until the jolt, and my body felt like it was all of a sudden being sucked up into my head like a silk web at once returned into the body of the spider who made it.

I threw up in the clover patch I fell down in and he found me there and carried me inside to my
mother, his lawn-green tennis shoes squeaking with dew.

"The reason we brush and floss is so we have a pretty smile," he said in the motel room that night. "It's a shame to go to all that trouble and always keep your mouth shut."

He unstuck two butter rum Lifesavers with his fingernail and popped both of them in his mouth. The paper wrapper, unraveled in a spiral. The TV was on low, the news. Kosovo. It wasn't a state but another country, he told me. Maybe another world.

He fell asleep in his clothes on top of the covers. I brushed my teeth and hosed my mouth with the Waterpik. After turning off the television and light, and though I had my own double, I crawled into bed with my father who slept, open mouth, snoring. I pressed my forehead to his and across my face came the roll and tide of his candy-sweet breath. And there, drifting, I began to feel something—a small truth—nudge up between us, like a baby cutting a tooth.

Emilia Phillips is the Levis Fellow for the Coordination of the Levis Reading Prize at Virginia Commonwealth University, the author of a chapbook Strange Meeting (Eureka Press, 2010), & a literary editor of Blackbird. She was a 2011 Mona Van Duyn scholar to the Sewanee Writers' Conference & a recent finalist for Copper Nickel's Poetry Prize & the Wabash Poetry Prize. Her poetry appears in or is forthcoming from Beloit Poetry Journal, Copper Nickel, Ecotone, Gulf Coast, Indiana Review, Sycamore Review, Third Coast, & elsewhere. She lives in Richmond, Virginia.