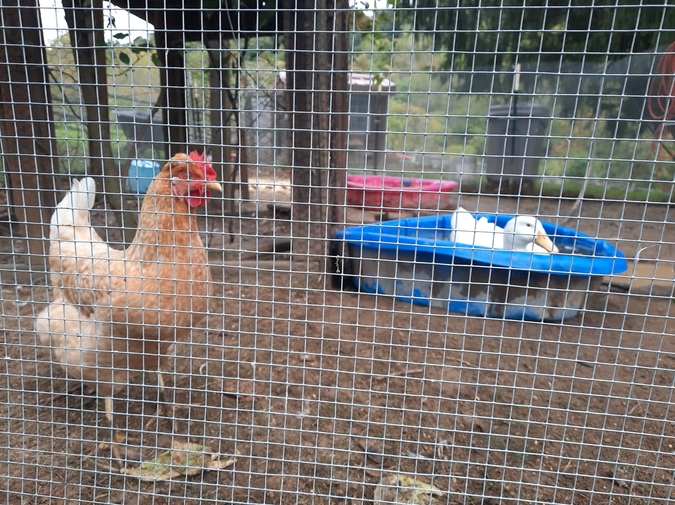 Usually I’d just as soon look away from cruelty, but Lemuel flung that chicken square at my face and my first instinct was to swat her, fretting her clipped wings and shrieking like a raspy old woman, down on the heads of the others. Simple reflex.

And so was the powerful desire to stomp a mudhole in Lemuel’s ass. But that one I countered. Impulse control, that’s what I’m all about now. When the chickens spook at the foam that’s spreading over them and they set about tearing each other apart in a frenzy, I know just what they’re feeling.

That nattering and clawing rising up in me again when I come back from the shitter and there’s Lemuel doing a pretty spot on impersonation of me reacting to the half dead chicken he pitched.

They all laugh. Even Marcus, who’s my roommate. And I get it. We’re free so we’re laughing. But me and Marcus put in longer stretches at the penitentiary than the others and understand you don’t go around shit talking your cellie.

Our foreman sees me pause at the edge of the bar and gets up.

Tildon’s ok. Knows he’s got a bunch of assholes with authority issues under him and he accepts that. He’s not out to reforms us – that was supposed to have happened before we got hired on. And if he has a problem working with a bunch of cons, he doesn’t show it.

“Everybody seems to be getting along pretty good.” He tips a filtered from his pack and I slide it out. “Even after that business with the farmer’s family.”

I nod. I can see how that’d be hurtful for him. Them cussing us and spitting as we taped the cuffs of our Hazmats, pulled booties on over our sneakers. Like we were the one’s got the birds sick.

Me and the others have all been coached on being dogshit. Even Kenny, who acquired more ink than lost time in prison. Tattoos on his face to tell the outside he isn’t one of them anymore.

But Tildon’s still part of the world. His virtue matters.

“In their minds, we robbed them of their lives,” Tildon says.

He sends his butt sparking through the dark and we let the silence batten us in. Empty fields stretch behind the roadhouse Tildon decided on for us. The bars he chooses always far out of town, trying to keep us anonymous, our whereabouts unknown.

Couple hours later, Marcus has to just about carry Tildon, his boot toes dragging in the parking lot gravel. Basically broadcasting tonight’s a good night to rip-off the bossman.

But somebody beat us to it.

Little cubes of blue-green glass like bunting ringing the van, all the windows broken out.

I push ahead, the smell familiar, so I’m not surprised by them all mounded up on the three rows of seats, piled on the dash, their feathers cleaned by our foam so that they look young and fresh, their deaths an injustice too far.

Next day, a new farm. It’s noon when we get out there, but the van the FDA wrangled for us from the nearby forestry department is bigger and has better AC.

I volunteered to go to the station with the police last night, and I know that puts a mark on me for Lemuel. He’s going to pull some shit again today. I’d tried to get a new partner. Hung over as he was, Tildon wouldn’t go for it.

But if I punk Lemuel first, it stops. He’s skittish today, the thought of the law and of the folks from the community all watching us itches him under his skin, his head darting around as we suit up.

“Something the matter, convict?”

“Let’s just get this over with quick.”

I make a point of admiring the farmland, the distant blue hills. You need to keep the advantage with guys like Lemuel.

We take the chicken shed furthest from the others. I toe through the broilers inside while Lemuel sets up the generator and fills the pool with water outside.

He passes the end of the hose with the aspirating nozzle through the window to me, which I clamp high on the ventilation sill, hundreds of chickens around me flustering and patting themselves like they can’t find their keys.

The genny kicks on and foam blasts from the nozzle, right in the middle of the congregation of chickens. The one’s there suffocate quick.

Or I guess what they’re really doing is drowning, drowning in a cloud.

Most are too sick to do much panicking, and they cluck around as the foam, like a giant, yokeless egg, consumes them.

I wade in. Any second Lemuel’s coming through that door. Imagine him coming into an empty shed. Only one door, he knows I must be somewhere, and in my white Hazmat, he won’t spot me crouching in the white fluff growing in the middle of the floor.

I walk over the lumpy carpet of already dead chickens. When I leap out, I’ll have a couple in hand and start pelting him like I’m stoning the damned.

But one shivers, squirms feebly under my foot, and like that my hands are up to catch myself as I drop into the cloud.

Breaking the surface cushions me, holds me, little bubbles popping in my ears like a thousand dry lips parting.

The light in here reminds me of the time I passed out in my car during a blizzard and woke up buried under two feet of snow. Less than a year before my first night in lockup. I was just a pissed off kid with nowhere to go, and even pinned down under a Kentucky winter, there was so little to me, if I held my breath I could fly.

Joshua English lives in Lexington, Kentucky. His work has appeared in, or is forthcoming from Black Warrior Review, The Rumpus and Little Demon Digest Vol. 2.