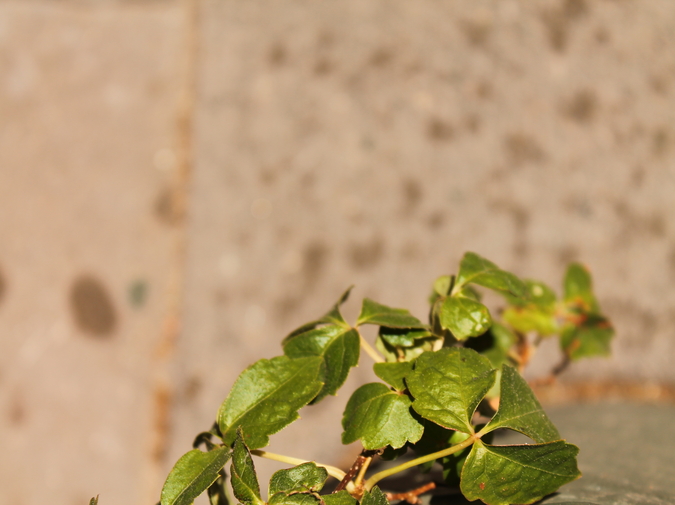 He led her blindfolded through the kitchen, down the steps to the backyard. “Birthday girl,” he whispered to her earlier that morning, bringing her coffee in bed.

The gift he had waiting for her was not what she was expecting. It was not one of her modest suggestions, both replacements for things broken: a new rose to plant where the old one, last spring, had offered several tight buds, orange petals seen only as bright slivers, before a strange virus left it shriveled to black crisp. Or a bicycle basket to replace the old one, crumpled in her accident.

After he’d been out of work for a few months, she had taken to riding her bicycle to the supermarket a few miles north, several times a week. She’d buy just a few items at once, tote them home in a plastic woven basket. She told him she enjoyed it, and she did – her muscles toned, pennies saved.

And then the day, late spring, when a young squirrel dashed in front of her, out of nowhere, in an instant. It got tangled in her spokes and shrieked – that’s what scared her the worst – and she went down, scraping her cheek and palms raw. The squirrel struggled free and lurched away, dragging a leg, trailing blood. She thought to go after the broken creature, but didn’t. What could she have done for a dying squirrel?

She wore the scrapes from the fall for weeks. He told her he’d try to bang the basket back into shape; after all, he had time on his hands. But it sat in the tool shed, garlanded with cobwebs, long after her face had healed. It was sitting there still.

Secretly, he was glad that she was back to driving the car.

Summer came, and with it a little good fortune: he found a seasonal gig managing a city pool. Grateful, he took pleasure in each morning’s Ph test, when the pool was his, an untrammeled turquoise. He started going to work early, making time for a dip. Every day he watched happy people—women, children mostly—splashing or basking, dipping their feet to stay cool.

And after dinner, watching TV while his wife tidied the kitchen, he would see the commercial, the same one every night, for Watson’s Pools, Spas, and Billiards. The ad featured a woman known as the Watson’s girl, mascot for her father’s showroom. She was a veteran; her heart-shaped face and tender cleavage had charmed local viewers since he was nearly a boy. She was a known quantity, a local celebrity. But she was a girl no more.

Years ago, he remembered, the Watson’s girl had worn a bikini and waved to the camera, propped on her elbow in a tanning bed, golden and grinning. Now lines creased her zealous smile, her waist lumpy beneath a thin cardigan. “She’s really gained,” his wife remarked one night. She had joined him in the living room, the dishwasher a comforting hum in the background, and when he turned to look at her he could see on her cheek the last pale green remnants of the once-purple bruise.

“I bet she had a baby,” she said. “In fact, I think I heard somewhere that she did. Twins! They should bring those babies on too. Everybody loves a baby – and twins no less! I can’t see why they don’t do that.”

Because no one wants to think about the Watson’s girl becoming the Watson’s mom, he thought. He changed the channel, steered away from the girl—this reminder of his youth, its swift recession, a distant star disappearing into the black.

But she came back; she always did, at night. Now he noticed the closeout deals she offered, the low low prices she rattled off. Not bad, he thought. In fact, that above-ground right there is quite a savings.

Now he removes the blindfold – it’s one of his ties, musty from the closet, unworn for much of a year – and as she blinks, he tells her it’s an investment. Next summer, they can cool their feet in their own oasis, quietly, without worry. She’ll stir up a pitcher of margaritas in those special cups she brings out in the warmer months. What is a savings for, anyway?

You can’t express dismay about a new pool sitting in your backyard. You cannot cry, you cannot ask why, you cannot think about the winter coming so soon, the crisp leaves settling in the water, becoming a muck, another surface to clear, to wipe clean.

Susannah Felts lives in Nashville, Tennessee with her husband and daughter, and is the author of a novel,  This Will Go Down on Your Permanent Record (Featherproof Books). Her work has appeared in The Oxford American, Quick Fiction, Wigleaf, Five Chapters, Quarterly West, Pindeldyboz.com, and other publications. She is a recipient of the Tennessee Arts Commission's Individual Artist Fellowship in Prose, and teaches writing workshops in the Nashville community and at Watkins College of Art, Design & Film.