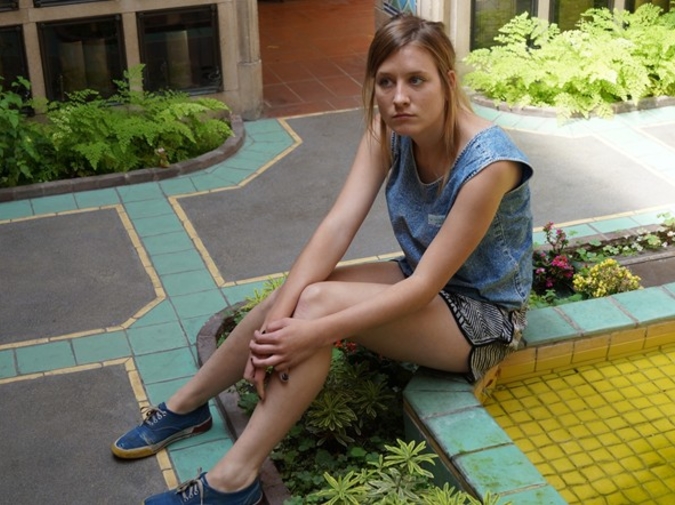 I told Adam this while we ate corned beef hash at our favorite diner Friday night. I was feeling a little smug when I told him. He stopped eating momentarily and looked off in the distance as though in deep concentration.

“Who are they about then?” he said, and I squinted my eyes like the sun was in them but it was nighttime and I was wearing sunglasses.

I had sent Chelsea a text of some importance. Something about my inner feelings or a type of mascara I was buying at CVS or something. Chelsea had replied to the text, “ok.”

Chelsea often replied to my texts with a lack of enthusiasm I was accustomed to encountering only in a romantic relationship or in a relationship I viewed as romantic even if the other party viewed it merely as an okay way of killing time. In no other manner did my relationship with Chelsea seem romantic. I didn’t know why Chelsea chose to demean me in conversations over text if she had no romantic interest in me.

I tried again. I sent Chelsea a text that said, “I think I am going to stop eating radishes for a while and see if that helps.”

I distracted myself from thinking about if Chelsea would reply by Googling Chelsea’s name with mine.

I might as well be texting my ex, I said in what I thought was my inner voice but must have been my outer mumbling one instead.

“What was that?” Adam said.

I had already complained to Adam about Chelsea’s texting habits numerous times and I could tell Adam wanted to say something about how I was allowing Chelsea to treat me this way or about how maybe I should let Chelsea go. Or maybe those were both speeches Meg Ryan’s character gives Carrie Fisher’s character in When Harry Met Sally. It’s hard to differentiate.

Yesterday I found myself singing the part of Eminem’s song ‘Kim’ where he says, “I hate you! I hate you! I swear to God, I hate you.” And then immediately counters that sentiment with, “Oh, my God, I love you” and for some reason it made me think of Chelsea.

Or maybe I had thought “I fucking hate you” while thinking of Chelsea and thinking that then reminded me of the Eminem song ‘Kim.’

Either way I felt reassured that I do, in fact, love (or hate) Chelsea, in spite of it all.

We were at a bar called The Barn - me and Adam and Eon and Chelsea. The Barn was located an hour north of Detroit and a half an hour south of Flint and for some reason someone had decided to decorate it with surfboards.

We were sitting at our usual table next to the fish tank. I was ignoring Chelsea because of something Chelsea had said that I couldn’t remember. I could only remember how I’d felt when she’d said it. It was a very strong feeling.

I turned to Eon as a way of making my ignoring Chelsea more noticeable.

“When does Candace get in?” I asked Eon, even though Candace was primarily Chelsea’s friend.

“I mean, she’s funny because she doesn’t know she’s being funny,” Eon said.

I tried to think of something to say that would be funny without seeming like I knew it was funny. I couldn’t think of anything.

“’Candace is Chelsea’s funniest friend!,’” I said in a high-pitched voice that sounded nothing like Eon’s.

“I wondered how long it was going to take,” Adam said. We had been in the car outside The Barn approximately five seconds.

“I wasn’t trying to sound like Eon,” I said.

“Maybe he said it as a sort of challenge.”

“Who said?” Adam said.
“Eon,” I said. We were at home in bed. Adam had turned his light out and was facing away from me.

“What are you talking about?” Adam said.

“The thing about Candace being Chelsea’s funniest friend. Like, maybe I could be funnier.”

But I couldn’t sleep. I was thinking of reasons why Eon might think Candace was funnier than I was and ways I could become funnier without seeming like my funniness wasn’t accidental.

I didn’t think Candace was that funny.

Candace had been in town five days and during those five days I had been quietly observing her and waiting for her to be funny.

So far she had made a couple quips and one or two comments that could be deemed sarcastic but I hadn’t noticed Chelsea laughing any more than normal.

In fact, if anything, Chelsea seemed to be laughing less, though it was hard for me to really tell since half the time I was ignoring her.

“I’m drawn to women who are emotionally damaged,” Chelsea said.

Or maybe Chelsea said, “I am drawn to women with vast emotional problems.”

I guess it’s the same thing, either way.

I guess I should feel flattered, either way, is what I mean.

It was another way in which Chelsea reminded me of someone I had dated.

It was my birthday and we went to the Flint mall.

“I guess I feel nostalgic about mall food courts,” I had said when Chelsea texted me the day before to ask where I wanted to eat lunch on my birthday.

There was a sign at the bottom of the escalator ensuring us that at no time was the Flint mall using Flint city water.

“I hadn’t thought about the water until the sign mentioned it,” I said.

As soon as we reached the top of the escalator I wondered if I’d made another bad decision. The last time I had eaten at the Flint mall, there had been twelve to fifteen fast food restaurants. Now there were five, three if you counted the three Chinese restaurants as one.

“I wonder how fast they got Jared’s face off all the signs,” I said.

“Must have been a lot of work for the employees,” I said.

When we were done eating we took the escalator back down. There was a train you could pay to put your kid on and it was making its way through the center of the mall with only one kid on it. The kid didn’t look excited like kids do when they’re on rides at a carnival. We waved and the kid didn’t wave back.

We couldn’t remember which way it was to the puppy store. There were five halls, each anchored by a different department store.
“I think it was Macy’s,” Chelsea said.

We walked down the hall toward Macy’s. There was a ceramics store where four or five old people were seated around a table painting ceramics. There was a man with a long white beard painting a Christmas tree.

We started walking down the hall toward Sears. One whole side of the hall was a fitness center. We stared through the glass wall at the people riding bikes in the fitness center.

“Isn’t that where you and Eon got a membership,” I said.

Finally, on the opposite side of the hall, near the Sears entrance, was the puppy store.

There were several windows, each with a different puppy inside, but all of them seemed to be a smaller or larger version of a yellow Labrador retriever.

“Can we hold this one,” Chelsea said to a young woman who worked at the puppy store. The woman looked seventeen.

“Please sanitize your hands,” the seventeen year old who worked at the puppy store said to Chelsea.

“Here you go,” the seventeen year old said to me, handing me the puppy Chelsea had pointed to, even though I hadn’t sanitized my hands.

Chelsea and I sat on the floor of a fenced in area with the puppy. Immediately the puppy began to chew on Chelsea’s hair.

“Stop,” Chelsea said to the puppy.

“Here,” I said, handing Chelsea a toy for the puppy to chew on.

“I like it,” Chelsea said, meaning the puppy eating her hair. “It tickles.”

We played with the puppy for ten or fifteen minutes.

“How are you guys doing?” the seventeen year old said.

“Can we see its sister,” Chelsea said.

The seventeen year old took the boy puppy and brought us the girl. The girl puppy looked the same as her brother but didn’t bite Chelsea’s hair.

“This puppy doesn’t have much personality,” Chelsea said.