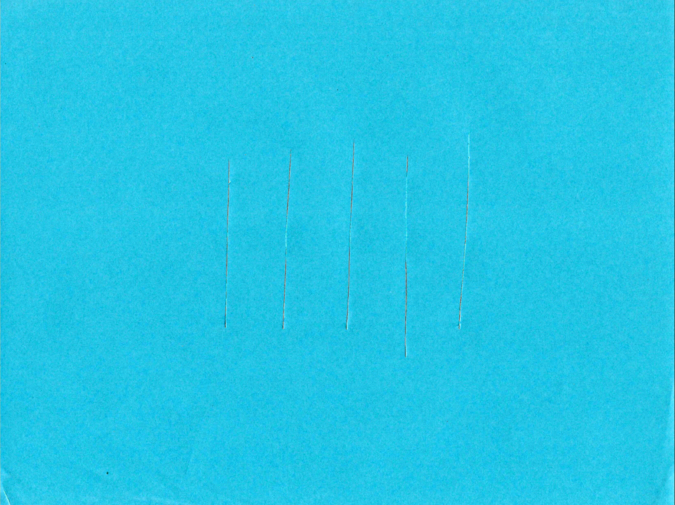 The next evening Ken pulls up to the facility in a pick up truck with his last name on the side. “My cousin’s contracting business,” he explains, his forehead sweatier than I remember. He whistles while he pulls a dolly from the bed and all I can think about is how if he had arrived fifteen minutes earlier he and Alice would have briefly existed in the same universe. Instead, Ken and I exist together in shame. Well, he doesn’t seem to feel any self-consciousness taking in the details of the hallways. He asks me about the HVAC system and how much it costs for the smallest storage space. “What’s the weirdest thing stored here?” he says. I want to say “This,” as the doors swing open to my unit but instead I tell him about the artist who sold his shit in a can. “Several of the cans are here,” I say in the voice I use to give tours. Several of the cans are here Ken repeats back in an exaggerated Transatlantic accent. He’s chuckling to himself as he starts piling garments into his arms. I suppose I should have bought boxes.

“So you’re reselling all this stuff, huh?”
“Yup.”
“I heard you can make good money doing that. Nice of them to let you store your inventory at work, too.”
“Well they didn’t exactly let me…”

Ken raises an eyebrow at me over a neon sundress. “Good for you,” he says. And then, “I think we can do this in three trips.” I follow him back out to the truck, rolling the empty dolly. He goes to the corner store and comes back with some collapsed boxes and a pack of American Spirits. He’s quiet on the way to my apartment. We each smoke one cigarette. Ken is a relaxed driver and rests his hand on the corner of my seat where it never quite makes contact with my knee. Whatever affection I feel for Ken has worn off by the time my bedroom is crammed with my things. The quizzical look my roommate gives me when she sees him says everything.

“Ok well…I would invite you to dinner but I need a shower,” he says.
“Right,” I say. He wants me to push back, I won’t. I would sooner crawl out of my skin.
“Let me know if you need help photographing all of this stuff. I dabble.”
“Mmmhmm.”
“Bye Edie.”
“Bye Ken.”


Alan the Etsy seller writes back. This time he includes his phone number. I start our correspondence with a photo of the ring on my finger. He texts back immediately, a photo of his dog with a ring balanced on her nose. “She’s helping me pack orders,” he says. I download the photo and see it was taken six months ago. His dog’s name is Shenandoah. She is a long-haired mutt. I wonder how many women he has texted this photo to in the last six months.

I tell Alan that I resell clothes out of my apartment full time. “Working for yourself is the best,” he says. The contours of his farmhouse begin to coalesce in the photos he sends of what he is making for dinner and the books he is reading. All of these photos are new and they are all for me. I send him the view from the Brooklyn Heights Promenade. “I wish I was there!” he says. I don’t respond and two hours later he sends a photo of the dog. “Or you can come here,” he says, “Shenandoah wants to meet you.” The shift is palpable; he is pursuing me.

The bus ride to Philadelphia is uneventful. The only conflict happens at the Port Authority when a woman isn’t allowed to bring two oversized suitcases. At first I am on her side, maybe she shares my predilection for buying things she doesn’t need. It’s only once she begins to transfer her cargo into a smaller bag I see that the suitcases are filled with counterfeit watches. “Nobody wants your stank Rolex,” says another impatient passenger.

Alan meets me at the Greyhound terminal. He is wearing a leather bomber jacket and tugging at the sides of his mustache. He carries my bag, including the case of paper he asked me to bring for the long weekend. “You missed peak foliage,” he says as we leave the city limits. He rests his hand on my knee. “I’m so happy you’re here.”

For the next two days we settle into a rhythm that feels far older than our correspondence. I sit in his kitchen, the wooden floor warped, and cut out the shape of Shenandoah panting on the floor and Alan’s salt, flour and sugar containers lined up on the counter. I wear his t-shirt to sleep in, Ultimate Frisbee Club from some college in North Carolina I’ve never heard of.

He packs up orders in the living room, occasionally calling out questions to me about my childhood or my favorite foods. I watch him spray each box with a cologne designed to smell like wood smoke. I feel a jolt of sadness every time I remember my bus ticket home. “Stay forever,” he says on Sunday with his face buried in my hair. On Monday morning I wake up alone in his bed. I make myself a cup of instant coffee and stand by the window waiting for him to return. Soon, he jogs up the long driveway past the grey hydrangea bushes and the mailbox with fireflies painted on the sides. His t-shirt is soaked with sweat.

He paces around the kitchen. I’m not sure where to stand so I offer him a cup of his own coffee. “This is moving too quickly for me,” he says. I stare at the floor and think about an empty storage space and the cool, filtered air of the facility. I empty myself of joy and heat and everything associated with the opera of life. My bus ticket isn’t until 8pm. “I would like you to drive me into the city,” I say. “Please.”

In the car I buy an Amtrak ticket, not even bothering to cover my phone screen and hefty credit card balance. “Drop me off in front of the art museum,” I say. He agrees and offers to pay for my ticket. “I get free entry through work,” I say. “

You don’t work for yourself?” he’s confused. Fucker.
“No,” I open the car door. “I work for an extremely organized criminal enterprise.”

I exchange my things for a numbered tag and head straight for the room filled with scribbles. It has been a few years since I’ve seen them and they are brighter than I remember, blood red and cerulean laced with black and brown letters–like a ransom note from the very soul of the artist. I sit for a long time; I am starting to feel something again. Then there is a commotion in the corner of the room. Whispers and some giggles. A couple dressed in leather walks in. The man is wearing a spiked collar and leash and the woman is holding the end of the leash. A third person dressed in black behind them is filming. I’ve seen enough. I walk out of the museum. Past the families congregating in the lobby. Past the coat check with my box of cardstock and favorite fall coat. I will catch an earlier train.

Daisy Alioto is a writer and critic living in the Hudson Valley. Her journalism and nonfiction have appeared in The New York Times, The Wall Street Journal, The Paris Review Daily and more. Her short stories have appeared in Triangle House Review and Talk Vomit. She is the co-founder of Dirt, a daily newsletter about digital culture.