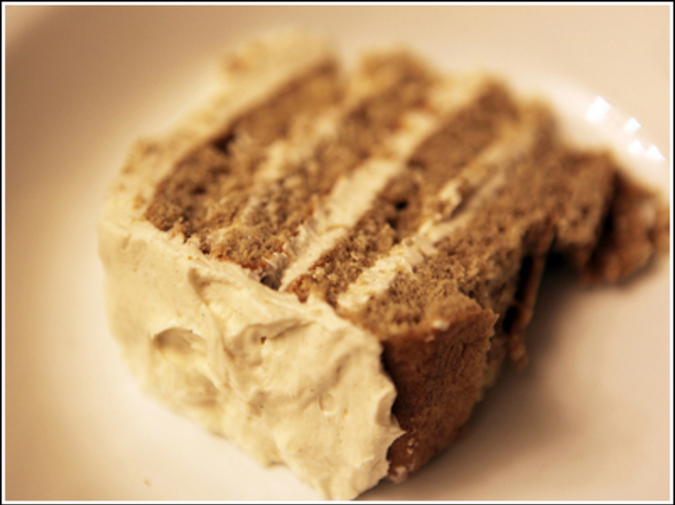 Talk to me about red velvet, butter cream, German chocolate—it’s all I give a damn about. Some thick-framed, salad eating nobodies bring kids to a cakewalk. Fine. Whatever. Their loss. I bring a god damn lunch pail and a hard helmet. You think I’m just going to walk with funfetti on the line? Wrong. I’m here to work.

The Sousa march cuts off mid bah-dum-bah-dum-bah-dum, and my heart starts jacking against my ribs. Chaos begins. Children laugh and run. They sit on the nearest chair. Not me. Hell no. I might be in the ring with them, but my mind is focused. The grand prize: a lemon cake four layers high with flawless icing, a foot tall, perfectly round, covered in cherubs of confectioner. Like a pregnant stripper, it grabbed me by the throat and hasn’t let go. Most of these kids are too distracted to know what they’re fighting for, but my eyes are open. Let them have their fun, let them wave to their parents outside the ring, let them play patty cake and giggle in their seats because it doesn’t matter. The cake will be mine. This whole walk’s just a show as I stomp my steel toed boots across the gym floor, parting kids sort of like Moses, but more like the Terminator.

The twerp smiles at me from my seat, but by the time I fix the situation, the smirk’s replaced with a pinkish mixture of snot and blood already trickling from his nostril. You could run a cheese grater across my sinuses and get nothing but a punch in the gut, but this boy leaks.

He’s supposed to crawl over to seat twelve like I told him, but he lays motionless, his face pressed flat against the floor. There is silence around the ring as all the children and parents watch his little body quiver with every sob. A little puddle of piss pools around his sweatpants. Embarrassing.

The boy doesn’t move; just continues spilling his liquids all over. Everything stalls. The seated kids start crying. Is he dead, they shout, is he dead? The cakewalk attendant doesn’t know what to do. She stands there looking at the boy, looking at me, looking at the boy, looking at me. Her poofed bangs jangle from one side to the other until she decides to find the school nurse. Great. If it were up to these bozos every little snowflake would get a band aid, a free cake, a boost of self confidence, and ten years of therapy while the rest of us actual workers sit around with our hands on our junk.

No way. Not at my cakewalk. Not with me. I grab the boy by his leg and hold him up like some swamp catfish. He’s wiggling and squirming trying to get free, but I keep dangling him. His striped t-shirt bunches around his neck, exposing a pudgy little chest and two pink nipples. When he starts crying again, I jostle him up and down until he’s quiet and all his change rattles out onto the gym floor. Some point in the jostling, the boy loses it again. Piss trickles through his elastic waistband, streaks down his bare belly and dribbles down his neck. He closes his eyes, but it looks like a little got in. It sounds like it too, because he keeps saying “pee-pee burns my eyeballs” and the like. Not my problem, kid. Come back to the cakewalk when you got balls and a bladder, I say, dropping him outside the ring.

Don’t like my style? Deal with it. I never take it easy—I’m always walking, always working towards that next cake. Even when I’m supposedly relaxing, I’m not. If I’m at the gym, I’m focused on pineapple upsidedown. If I’m waiting for the bus, I’ve got fifteen hundred batter recipes going through my head. If I’m out mowing neighborhood lawns, I’m strategizing on my march techniques. I’m never, never, never not cakewalking.

The announcer taps on the microphone to make sure it’s on before trying to energize the crowd with froggy “oohs” and “ahhs” as she reaches into the bucket of ping pong balls. There is a moment, before the number comes out of her aged, cracked mouth, of thrill, of amazement, a moment when every muscle contracts at once, when the body could implode with anticipation. Like shooting a charging bear in the face, like punching the teeth out of a migrant worker, like ripping a child support check in half; the cakewalk oozes masculinity. I clench my teeth. Hard. My gums go numb. I can taste blood. I keep them clenched. I want her to say seat seven.

But she says twelve.

I’m not mad. I’m bigger than that. The kid with piss in his eyes is probably crying into his mom’s knit sweater though. If he just sat where I told him and didn’t urinate all over himself in front of his peers, he’d be holding a winning cake. His loss, my gain. We’re having a redo.

The cakewalk assistant mixes us up for the second try. I could move but I flex my pecs instead. Yeah, that feels right. Real right. As the twenty-five of us funnel into our new locations, I make notes of what to watch for: the girls with the sharp little pink nails, the criers, the farters, the ones that smile when you look at them, the mama’s boys hovered over by over protective parents. They look at me, and they probably think they’re entering a world of trouble. They’re right.

I end up beside a pimpled teen and a small elementary girl in a blue ball cap and orange shorts. She looks young. Like two hours old young. Like the umbilical cord might be tucked in her shorts kind of young, but under the bill of her hat is a look like she’ll someday crash a pickup for fun. I’d be surprised if she ever smiled in her life with those beady eyes. She seems alright. Reminds me of myself.

I crack my neck, twice. The popping vertebrae deafen me. Everyone within ear shot turns to scope out the rat-tat-tat tommy gun erupting from my spine, but I’m already getting into the zone. Too far gone to notice the chumps.

But something tugging on my leather jacket pulls me out of the cake zone and back into chumpland. It’s the girl.

No, I say, leaning in right up to her pink little face, I’m your enemy, your worst nightmare. I’m what you see when your dad’s puking up blood for looking at me wrong.

Daddy, she says again, with her puny hands clenching my shirt.

The marching band starts. We walk. The girl, her face all scrunched up like a fetus, tries to keep up but she’s no match. Her steps, her marching, her tiny little velcro shoes that light up whenever she puts her foot down: it all leads to nothing. I nudge her forward with the tips of my steel-toes boots, but her eyes start swelling up like all the other kids who can’t handle criticism. Whatever. When I’m about to push her to the ground, she turns around. She’s smaller than a Rottweiler, but her squeaky voice stops me dead saying, help me cakewalk, daddy.

With the girl in my arms, we walk slowly within the circle. The other kids pass us, lap us, they are annoyed at the education going on within the ring. They want to be the heir to the cake. Forget them, they’re nobodies, I tell the girl, sharing swigs of the condensed milk I keep in my jacket pocket. The can looks enormous in her hands, but she drinks her fill. Some dude looking like a coat hanger is yelling from outside the ring, demanding that I put his daughter down. Give it up, pal. Let the girl experience a real father for once.

Finally, the music stops and we walk on over to seat seven. It’s empty because these kids know better. I raise my arm at the boy in seat eight and he flees. I sit there and set Baby G down on my lucky number. The G stands for girl. We made that up during the march.

Once everyone’s seated, the announcer starts working the crowd again.

Let’s take a second to thank Mrs. Swift for baking such a lovely cake, she says, wheezing so hard between words that spittle splashes against the microphone.

I’ve known the Swifts for so long, she continues, I taught their mother when she was in the third grade.

Older people in the crowd sigh. They know how long she’s rattled on about boring garbage at past cakewalks, but Baby G doesn’t. The girl’s turning red. Her infantile frame unable to take the excitement. All the while, the announcer takes a few breaths, a sip of water, a few more breaths. She could go on all night if some fearless man in the audience didn’t shout for her to read the fucking number.

It was me. I’m fearless.

Seven, she says in a huff.

I turn towards Baby G to give her a handshake and plan a celebration, but she’s already gone. I want to congratulate her, to throw her in the air, to say that’s my Baby G, unfortunately, her skinny father is already doing all those things. He’s jumping up and down while the girl hoists the cake above her head with those tiny little arms. She looks like she’s holding a cartoon anvil over her head, like any second it would crush her, driving her into the gym floor like a nail in a sweet piece of pine.

I sit alone in my little seat, try to think about what just happened, try not to beat the prepubescent punk beside me to a pulp for patting me on the back and saying that maybe I’ll get lucky next time. But all I can do is watch Baby G walk away with the cake that should have been mine. Before she disappears behind the knees of the crowd, she turns back towards me and flashes me a smile. The few teeth in her mouth are sharp and spaced out like a half eaten cob of corn. Her eyes tighten as she stares at me until I look away, like I’m nothing at all, like I should be lucky she didn’t rip my throat out, like I should thank her for being alive.