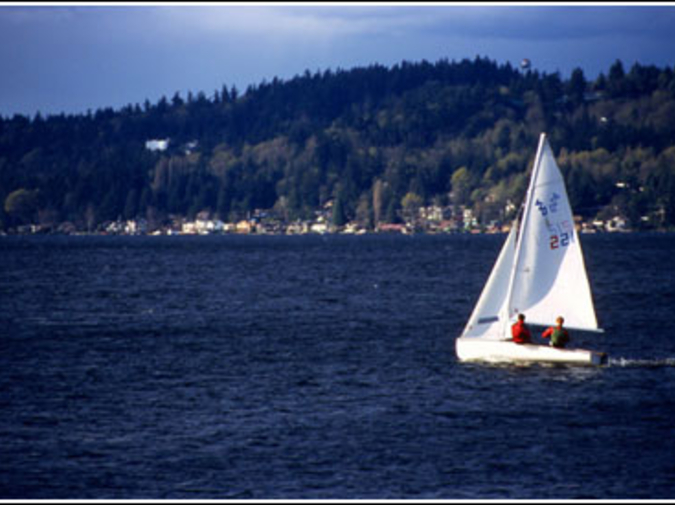 She was what his father, who had a Betty Grable calendar in the garage, used to call a bleached blonde, and she was kind of daffy-taffy in that old Hollywood way. Face all smooth and creamsicle pink. Color by Technicolor. On his first day, Ketch heard her down by the office as he was lugging the DeWalt up from the tool shed:

"I attended a pool and hot tub seminar from eight till noon. Put on by Thunderhead County. So we learned a lot about what was going on in the pool..."

Was she kidding? Who attends pool and hot tub seminars? When they finally met he asked her if it was roughly the same as a sink and toilet seminar.

"YOU can soak in the toilet if you like," she said, not laughing at all. "But don't expect me to join you. I'll be in the hot tub."

Actually, he never heard her say the word tub but deduced it from the context. Lake noise, the motors of the season's last boats, wiped out the word and the entire next sentence too. And then she was gone, blowing him an air kiss and flouncing down towards the rental office. His father, who wore a bomber jacket and flew fighter planes before turning to cars, would have whistled one of those wolf-whistles. His father was a page out of the pilot's handbook.

He watched her walk until she was gone and then he watched the lake. At the cusp of afternoon and evening it was really something. Views to Canada, mountains that touched the moon...

But those same mountains meant torrents of snow -- way before official winter. The lake would freeze thick, and the town would empty and be white as a ghost for so long. He had a history of pernicious cabin fever. Days when all you do is turn on all the lights and slug back cans of Olympia. He stared up at the glaciers on high, indifferent to the warmer world below. Ice gods that were only biding their time. He was afraid that this place could be the worst ever.

Next day he was setting up his Skil-Saw outside the broken shack they said would be his - and she appeared again. Out of nowhere like a falling leaf. She said they had sent her up to consult. That was the word she used. It flattered him immensely.

"Come again," he said, "I'm just the handyman. They sent a decorator to help the handyman get his place ready?"

"I'm not just a decorator, Mr. Ketchum. I'm an interior designer. That means I know how buildings are built, not just how they should look. And you're not just a handyman. Down at the office they told me you're the resort's new engineer."

He studied the card she slipped into the pocket of his jeans. She just did it, like a pickpocket -- hand in, hand out, deft as a shadow. If he hadn't been looking he wouldn't have known it. "Susette Gravier, now that's a name."

The place they'd given Ketch to occupy in the off-season was a shambles. But after picking and poking he concluded all the problems were tactical and fixable, at least in theory. Only one was strategic.

He pointed to a pile of powder on the tarpaper. It looked like the spilled contents of a cremation urn. "Powder post beetles," he said, kicking the dust. "That used to be a two-by-four."

"You mean a stud?" He saw her do something with her eyes. Bat them? It was definitely more than a blink. He thought of his bomber-jacket father and the wolf-whistle again.

He described the powder post beetle corpses he found the last time he was allowed to use cedar. Up around Banff. Dead like ancient little dinosaurs struck by a planetary catastrophe. Volcano eruption, meteor crash. One of the creatures in particular, frozen in the act, its beak stuck in the wood.

"I have a cheaper way," she said. "Your stove working?"

She left and returned with a big Tupperware container and a slew of pans, all of them Teflon. First she opened the Tupperware and said, "Ta da!" It was the dish she personally invented, she said, Oreo raviolis. He didn't think he had heard her right. Sure enough, biting a ravioli and finding dark and white chocolate instead of cheese was a delight. Ketch ate a ton of them. Then she turned all the jets on high and set the pans on them. Empty, no oil, no food, and they started to smoke.

"Is this about more dinner?" Ketch asked. "I'm stuffed."

"You better not have a parakeet around here," Susette said. "The fumes will kill it, and it's too small to eat. I'd say we get out for a while."

With the empty pans smoking she led him out of the cabin and down to the lake. "You'll see," she said. "In twenty minutes no more beetles. There's something in that Teflon that hits them like mustard gas."

He looked at her creamsicle-smooth face, set against the mountains like a forties movie poster. His father would have said, "What a kisser, Toots. Who put the cherries in your cheeks?"

She must have read his mind. "Do you like shrimp?" she asked.

"Well... sure I do. I was out at the Oregon Coast once. Those people eat them like candy."

He thought about the question and had no real answer, but said yes just to keep the talk going.

"Did you know a flamingo would be white as a sheet if it didn't eat shrimp?"

A piece of trivia that had escaped him, that was for sure. He knew he looked flummoxed, because he was.

"Gospel truth," she said. It's the pink pigment that does it. And I'm living proof. I must have been a flamingo in a former life. One day without shrimp and I'm a walking ghost."

The way she said it, narrowing her eyes sweetly and staring through him, made Ketch think of a nice vampire girl discussing a day without blood.

"Let's get back to the cabin," she said, "and see if we have any corpses."

He took a last look at the lake, and then another look, because all of a sudden the water looked darker. No, not just darker -- blacker. His mind must have locked on that instant, on the sudden blackness of the lake, because it woke him later in the dead of the night, after she had gone -- to wherever. In the dream a pink mass had settled on the black water, and an icy wind was knifing down from the glacial peaks, the first attack of winter. The pink mass lifted exquisitely and burst into millions of beating wings. In this land of hawks and snowy owls, the sky was churning with flamingoes.