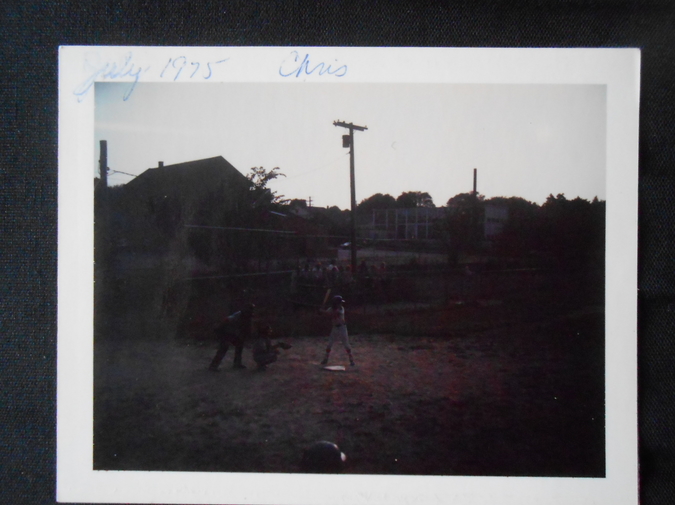 “You’ll like staying with the DeRosas,” my mom said as she turned off Route 1A toward Byfield. The car swung around and I squinted hard as the late afternoon sun slanted down into my eyes.

“They have a boy who plays baseball,” she added, an obvious attempt to cheer me up. She’d told me about him three times already over the past day-and-a-half.

I slumped down in the passenger seat, my gym bag at my feet and baseball glove on my lap, and stared out the window at the dying marsh grass. Usually when my parents went off to lead one of these weekend retreats, they’d leave all four of us kids to stay at the same place, usually with another retreat family, sometimes even people we already knew. But this time, my three siblings had each scored an invite to spend the weekend at a friend’s house. I slumped down lower, and wished, not for the first time, that I had the kind of friends who would just invite me over for the weekend like that. Instead, here I was, like some poor stepsister, getting shipped off by myself to someplace two towns away, to stay with people I’d never even met.

“Did you remember to bring your glove?” my mom asked.

I rolled my eyes. As if I would go anywhere without it. I lifted the glove off my lap to show her, then let it slap back against the thighs of my jeans.

After a few more turns, we pulled into the driveway of a house that looked just like all the other houses in this new development near the marsh. I felt like I was in a foreign country. The only familiar thing was the smell of the ocean a few miles away.

My mom and Mrs. DeRosa were old retreat friends, and they hugged and smiled when they met at the door. I lagged behind, dragging myself slowly up the front steps.

“And this,” my mother said as I arrived, “is Chris.” She pushed me gently out in front of her, keeping her hands on my shoulders, squeezing ever so slightly. It wasn’t a warning to stand up straight or anything like that—I could tell she was just trying to send me the message that everything was going to be all right. Part of me wanted to shake her off, but the rest of me really hoped she was right, that it would all be okay.

Mrs. DeRosa said hello, taking in my hat and glove, then she called up to the second floor. “Joey!” She turned back to us, smiling. “He’ll be right down, I’m sure.”

A tall dark-haired boy came partway down the carpeted stairs and stopped. I could tell immediately he was a lot older than me, fifteen at least. He wouldn’t want to hang out with me. He was probably in his last year of Senior League, or maybe even already up in American Legion ball.

“Why don’t you take Chris out back and play catch until dinner’s ready,” Mrs. DeRosa said.

Joey nodded and ran back upstairs. In two shakes he was back with his glove. My mom took advantage of my momentary shock to kiss me on the cheek. “Have a good time—we’ll pick you up Sunday afternoon.”

I dropped my gym bag in the hall and followed Joey through the house and out the kitchen door to the backyard, where he and I started in, loosening up our arms. Right off the bat, he asked me if I played on a team. “Yup,” I answered, silently thanking the baseball gods for that judge in New Jersey who told the Little League they had to let girls try out. Then Joey asked how old I was, and I told him.

“Wow. You throw pretty hard for eleven,” he said, backing up a little to increase the distance between us. “D’ya pitch?” he asked.

I shook my head no. “But I’ve always wanted to.” Rocker step, wind up, kick, stride, release.

I went through my motion again, and fired it at him as hard as I could. I wish it was that easy. I’d tried to bring it up with my coach, multiple times, but there always seemed to be something else that needed his attention. Just let me try, I pleaded with him. Maybe another time, my coach said.

“Yeah, you should give it a try,” Joey said. “How about now?” He squatted down and giving me a target.

I hesitated, ball in my hand.

“Just throw to the glove,” he said.

After a half-dozen pitches, Joey began calling balls and strikes, based on how much he had to move his glove to catch the ball. Then he started changing where he held his glove. Back then, I didn’t throw anything with movement, just straight fastballs. I had decent velocity, nothing special, just enough zip to get by. But location was my strength, and I knew it. That autumn afternoon, as the air slowly grew cooler and the afternoon light faded, I dialed it in and let it fly, the ball speeding toward Joey DeRosa’s glove over and over, wherever he held it, right up the middle, high and inside, low and away.

“If you can throw to the glove like this with a batter in the box, a coach’d be crazy not to let you pitch,” Joey said, standing up to stretch his legs after I’d struck out the side for six straight imaginary innings.

When his mother’s voice called us in from the gathering darkness, Joey squatted back down and called for one last pitch, another high fastball, more than a little inside. He grinned when the ball slapped into his glove. “With that kind of control, you could throw some serious chin music.” I grinned back, imagining little ol’ me, striking fear into the tough twelve-year-olds in the league.

He slapped me five on our way in. “Nice job, Chris,” he said. “Maybe we’ll do it again tomorrow.”

At that moment, there was nowhere else I’d rather be than in this suburban backyard, with the smell of woodsmoke and fallen leaves, walking with my new buddy toward a bright-windowed kitchen and the promise of dinner.

The rest of the family was already seated when we came in. Besides Mrs. DeRosa, there was Mr. DeRosa, and a little sister younger than me. Joey and I dropped our gloves in the hall, washed our hands at the kitchen sink, wiped them on our jeans, and slid into open chairs on opposite sides of the table.

“Joe, Hannah… this is Christa,” Mrs. DeRosa said, smiling. “She’s staying with us this weekend, while her parents are on retreat.”

Oh, shit. I stared down at my plate.

“She?” Joey looked at his mother, then turned to me.

I didn’t want to look up, but I forced myself. He had dark brown eyes, like his hair. I hadn’t noticed that before.

“I thought your name was Chris,” he said, and I just sat there, staring back at him, saying nothing.

I watched as Joey’s face slowly closed down, like city storefronts at the end of the day, when the shopkeepers pull the metal grates down from the inside.

I suddenly wished I was anywhere else in the world. It was quiet for a little bit, and then Mr. DeRosa, who seemed like a friendly Dad, asked me what school I went to, and what grade I was in. From there the dinner table conversation stumbled forward, and slowly gained momentum, but for the rest of the meal, Joey stayed focused on his plate. When he was done eating, he asked to be excused to do homework, and went upstairs. 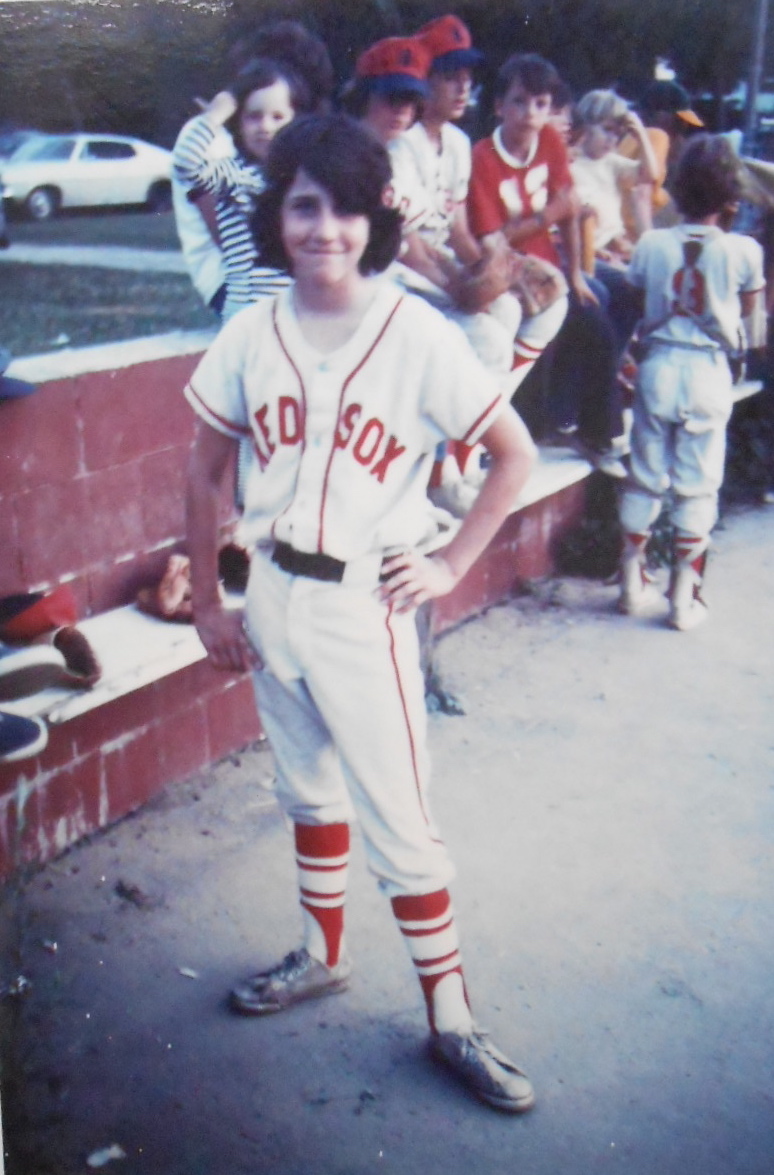 The next morning, Joey slept late and left the house in a rush, shouting that he was off to meet friends at the football game. I watched the Saturday cartoons with his little sister, and at lunch I asked Mrs. DeRosa when she thought Joey might get home.

I carried my glove around the house with me all afternoon, hopelessly hoping for another game of catch.

Christa Champion once dreamed of taking over right field at Fenway when Dwight Evans retired. Instead she grew six inches in two years and started spending time shooting hoops down at the schoolyard. After twenty years of coaching collegiate basketball, Champion decided to switch careers and become an unemployed writer. She is currently at work on a series of river-inspired essays about family, gender, identity, belonging, and place.