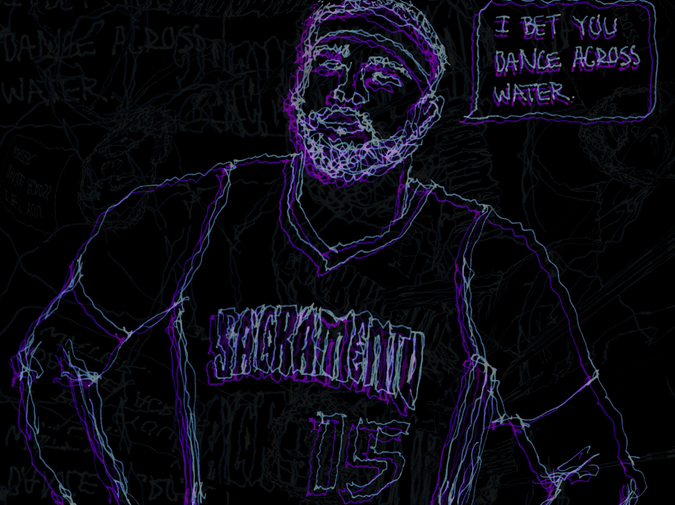 Big Boogie, Big Boogie, after watching the way you move through the years
I bet you could dance across water and sometimes I hold my breath
when I see you twirling in the post, all 280 of you, with the grace
of a nun or one of the ballerinas glued to Dwight’s shoulders,
or when I see you swatting the shit out of CP3’s floater
sometimes when you jump I think you can’t even get over a Big Mac
and sometimes I think you’ll blow through Arco’s lid
all these motherfuckers talking about the Unibrow’s athleticism
and Blake’s dunks and Dwight’s D from four years ago
but baby there’s no substitute for a bull in the post
with hands soft enough to build a birdhouse of wishbones
and I know you’re the future like Sir Charles is the past
and we need you here in the valley, yeah we need you
I grew up with C-Webb slamming White Chocolate lobs through the hoop
and spotting Bibby at Blockbuster pulling out a wad of hunnids to rent
The English Patient and Peja just swishing and swishing 3s till’ I fall out
my seat and Big Brad Miller’s flossy cornrows and Samurai Scot hacking Shaq
and Hedo and He-Do and the heartbreak of 2002
I still watch highlights sometimes and think what could have been for them
that hardware in Sacramento and when I see you I have hope
that the days will be easier to move through come November
and the drought will end and that there are no more ping pong balls
in the future cause we’re moving up in the world
Cuzistan is a country on every map now after this summer
and maybe they should rename the bald eagle after you
picture it now, the Boogie Eagle throwing smiles down across America
like Boogie Claus putting smiles on all the Sacramento kid’s faces
and Jerry, Boogie, even Jerry fucking Reynolds likes you enough to
not give you a different nickname, and Boogie, you’re the only King since
Ron Ron to set Arco on fire so often, and shit man, the sprinkler system shut down
tonight so I guess we’re all just gonna dance and burn, dance and burn
cause Boogie Time is coming up and it ain’t just one night long
it’s gonna be a while, yeah it’s lasting so long the rain will finally start falling
once you lead us to the promised land, when you part the sea
for Vivek Ranadive, Stauskas and his dad, and everyone else
in Sacramento to cross over the mountain to the moon
so we no longer have to howl so loudly to be heard
what I’m trying to say is there’s fire beneath your fingernails
let it roar when you dive into the water and make a splash no brother could beat
a splash big enough to reach Slovenia, wherever that is
and we don’t want to put too much pressure on you, but we believe in you
and we believe you have a heart of gold, shinier than Christie’s dome.
Boogie, it’s gonna be all chicken dances and jersey ripping for you this season.

Dominic Gualco is from Sacramento, California. His writing has appeared at Big Lucks, Word Riot and elsewhere. He wrote the poetry chapbook THE APOCALYPSE IS NEAR AND I AM GOING TO LOVE THIS WORLD.