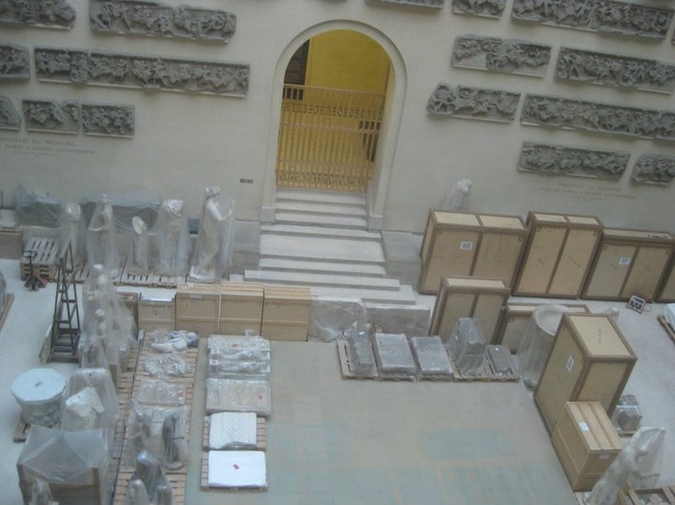 I like to believe it started with her grandfather’s blessing and a bottle of spray paint—even though it might not have. The blessing always happened before dinner. The family gathered on whitewashed wooden chairs that creaked under the weight of regrets, and Grandfather raised his scarred palms to the hole in the ceiling. The hole had grown larger through the years, though the family hadn’t noticed. When Grandfather had first started the blessing, the hole had been the size of a coffee bean. Barely one star shone through. But the years had elongated the hole, and it now looked like Heba’s index finger with a callus near the knuckle.

The blessing, too, had become gradually larger. It had started with a simple phrase. “Return us to our land.” But when nothing happened, it was thought that maybe the blessing had been too vague. Over time the blessing became more specific, and by Heba’s thirteenth birthday, her family said:

Grandfather: (Face tilted to ceiling hole) Praised one, we would like to thank you for all you have done. You gave us food and strengthened our souls. (P) We only ask you return to us to our home. It is the house with the purple ivy, large stones, and my (p) vegetable garden. I still have the keys and am ready to return with my family.

Family: (In agreement) Return us, praised one.*

Grandfather: You have given us (p) so much. We are thankful. (P) This is all we ask.

Heba had never seen her grandfather’s house or the garden, but she imagined it. She pictured it with stained glass windows that splintered the light, and hidden passageways that only she knew about. The mauve ivy that crept around the stones and inside his passageways was the same color as the carpeting in the den. It had been her grandfather’s choice to plant that ivy decades ago when he was but a boy, and the decision had been the right one. It contrasted beautifully with the date palms and the cucumbers that reached an arm’s length before summer.

Nobody had ever told Heba that now the ivy only existed in memories and daydreams. But both her grandfather and she knew. She had searched for the house’s existence in newspaper clippings, and what she had found she hid with her spray paint bottle underneath her bed. The stone house had been bulldozed, and a fifteen-story building stood in its place. The plot that once held her grandfather’s vegetable garden had been converted into a parking lot and the time capsule they had once buried under the persimmon tree had (most probably) been dug up and thrown out.

To return to the house, the family would have to go back in time and shield the house with bullets. But Heba knew that her grandfather would rather do that than watch it be destroyed. His father had quarried and hauled the stones with his own hands, and his mother had given birth to him on the vinyl couch that smelled like herring. She would squeeze Grandfather’s hand as he fired the bullets one by one, and they would go through the shatterproof bulldozer’s windshield as all dream bullets do.

One evening during the blessing, Heba saw three of her grandfather’s eyebrow strands fall out,** and when she glanced down at the frail strands she realized that it was time. He was old and would die within the week. She excused herself from the table, crawled under her shared bed, grabbed the spray paint bottle, and sneaked out the window. Sweat glued her primrose hijab to her forehead, but she did not curse the heat. She thanked it. She passed by a man selling carob juice to a tourist, a child begging with a broken mug for money, and a boy who was selling paperbacks on the street. None noticed her or the small bottle she carried in her hand.

It took her two hours to reach the concrete wall that divided her land from the others. By that time the desert dust had caked her skirt and lower arms, and her arm holding the bottle had begun to droop. The bottle’s red spout now faced the ground. The cap had fallen off in her journey, and its red neck reminded her of the ostrich she had seen at a zoo.

She glanced up at the checkpoint that guarded the wall. A man, roughly twenty with a trimmed beard and blue eyes, paced behind a single-paned window. He had a fan made of folded computer paper, and he was fluttering it next to his M6-47. Heba glanced at her watch. Only two more hours until his shift was over. Heba’s lips, pulled tight, prickled when his gaze turned toward the barrier.*** She did not want to be watched. She wished he would search for more computer paper to make a stiffer fan. But she did not spit at him, as her grandfather would have. Instead she attempted to slip by unnoticed while the soldier fluttered his limp fan and searched for a breeze.

The concrete slabs loomed over her and stung her eyes. She was almost there. Six more feet. Then five. But the bottle in her hand had become slippery and salty, and it stung the paper cut on her palm. She rubbed her hand, and then praying the soldier wouldn’t notice, bent down to scratch her legs. By the time she stood upright again, the world turned a rustic pink, and the soldier was watching.

“Get away from the wall,” he yelled down from his post. The M6-47 was now in his hands. The computer paper fan must have dropped to the floor.

She put her callused finger to her lips.

“Back away. Back away from the wall.”

“Do not radio me in,” she said. “Do not shoot me.” The wind ripped her words and threw them against the concrete barrier. They landed on the soft sand next to her sandals.****

She took a step closer. Four and then three. Her primrose hijab fluttered, and her heart ached. The bottle was only inches away from the concrete. She had been waiting years for this. She pressed her thumb onto its spout and black paint sprang. She curved the paint up and around. The motion reminded her of the hot air balloon she had seen in a magazine, and she smiled.

She didn’t respond. Instead she used her paint to shadow the circle, so it was round and firm. It was a knob. A doorknob like her grandfather used to describe to her

Grandfather: The doorknob was brass and (p) large. Most doorknobs fit my palm, but this one—this one was double the size. (P) It had lettering on the side, (p) and sometimes when I squint my eyes, I remember what it says.

Heba: What happened to the doorknob, Grandfather?

Grandfather: I didn’t save it. I thought about ripping it out and putting it in my pocket (p) with the key. We were packing the suitcases and afraid the soldiers would come. (P) I asked myself, ‘What’s a doorknob without a door?’ I couldn’t fit a door on my back, and so I left it. I left it.

Around the knob, she sprayed three large lines that were exactly her height. She had never seen the door nor heard her grandfather’s description****** of it, so she made it her own. It had two mid-flutter swallows painted in the center and a square lock above the knob. In the corner right beside it, she sprayed the stone house’s key. It was only two inches long and half an inch wide with five ridges on the bottom—almost impossible to do with a single bottle of spray paint and no duct tape. She gnawed her lower lip and threaded the key through a black cord.

“Put down the bottle,” the soldier yelled. His voice had become progressively louder. Heba glanced at him. His gun was pointed at her head, and his face had turned a deep red. Heba wondered whether he was having a heat stroke. But her grandfather’s eyebrow strands were falling and who knew what tomorrow would bring?

“Step away from the wall,” the soldier commanded.

Heba stepped in closer and stuck her hand into the concrete wall.

Heba twisted the black spray-painted key in her hands. It moved two inches to the right. Maybe twisting wasn’t the right move. Heba spread her legs and planted them firmly against the base of the wall. Then she pulled.

“What was that?” The soldier trembled.

Heba fell backward with the release of the key. She crashed into the sand, and her legs sprawled out. She stood up, shook herself off, and inserted the key in the square lock she had painted. It took a few seconds of jiggling as all good locks do, and then it clicked, and the wall rumbled.

Heba twisted the knob and pulled open the door. A partial slab of the concrete moved into the sand, opening up a mauve carpeted den that had a single vinyl couch. Heba bent forward, her head inside the concrete shelter. It smelled like herring. “Grandfather, I found it. I’m here.”

Heba heard the bullet whistling in the thick heat and turned to see it. She had never seen a real bullet before, only the ones of her dreams that broke through shatterproof glass, and this one was smaller than she had imagined. It looked silver and frail, almost like her grandfather’s eyebrow strands that littered the floor. She took one more look and then shut the door.

*During the construction of the concrete wall that separated them from the ‘others,’ the following addition was inserted between the family and grandfather’s responses: Praised one, they are building a barrier so we may never return. (P) Break it down with your force and take us home (p) to the garden with cucumbers and the stone house.

**Heba always listened to her Grandfather’s blessing with salty eyes. While he looked up to the hole in the ceiling, she always looked at his wrinkled brow that was more silver than white.

***The checkpoint soldier was supposed to watch for climbers and explosives. If Heba had been carrying an explosive, this could have been his undoing. But she was not, and his superiors never questioned him about this day.

****Her words had not been loud to begin with, and it is doubtful the soldier would have heard them even if there had been no wind.

*****It was obviously illegal as there was no graffiti or art on the wall, and a soldier was paid to guard it. The soldier, perhaps, felt the need to state the obvious for lack of words. We can assume that he did not want to shoot her.

*******He needed some water. Normally he remembered to bring his canteen with him, but he had forgotten it this morning because his reading glasses had fallen off the stool, been stepped on, and needed to be taped back together. In fact, the canteen was still dangling from the corner post of his bed, filled from the day before.

Aleah Sterman Goldin’s essays and short stories have been published in The Doctor T.J. Eckleburg Review, Gone Lawn, Zeek, and South Loop Review. She is currently on a Fulbright in Mongolia, where she is researching indigenousbonesetting practices.