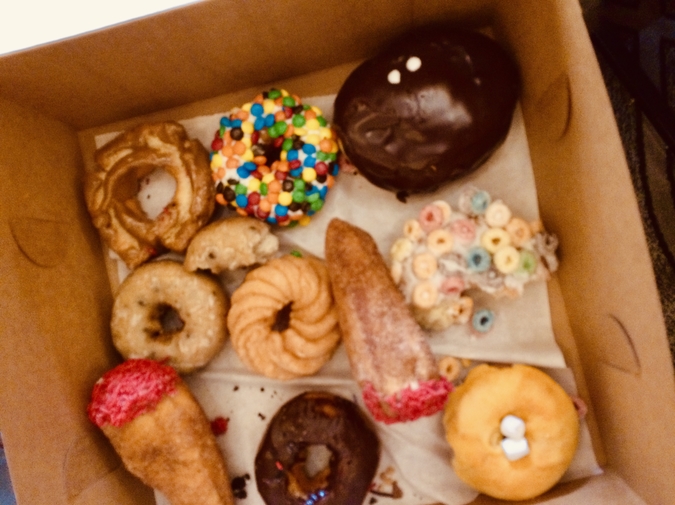 Billy James Henry told me this island was made of fallen angels. “I could show you right now,” he said. Nodded toward the mountain.

He could show me everything. Latin in the shells. Giants in the trees. “Fallen angels in the very spot you’re standing, yessir.” He’d seen it all.

Half his head was shaved. Greased wisps of hair ponied up, a tight sheen. He peered over his shades, eyebrows raised, like a presiding judge.

Billy James went into his truck and brought over a bag of jumbo cottage cheese.

Showed me a moonstone he found.

Told me the trees were rotting from the inside.

Showed me a pipe he made.

Told me all the shells were cracked. “See,” he pointed.

Billy James did not speak, he whispered. Made you lean in. He talked fast, too, like a cattle auctioneer, and he never stopped. When he turned to walk away, he only made it a step, maybe two, before whirling around to say something else. “I’m telling you, man.”

“Everybody says they know where the king is buried, but I actually, really do,” said Billy James and pointed at his inked wrist. King of Spades.

He said Latin was everywhere: in spiraling shells, in eyelids, in nutritional facts. “Do you read Latin?” I asked. He shook his head no. “But I’m learning Hebrew.”

Next day I was grilling some dogs, when I heard a voice. “Hope I didn’t scare you last night.” And there was Billy James.

He hiked up his shorts which sagged below his knife bone hips and bent down to plug something in. Maybe he was shaving, I thought to myself. But no, it was a power tool. He revved it and smiled and then really revved it. “Never know round here.” I didn’t, but Billy James knew.

Billy James knew everything under the sun, but acted otherwise when I told him about Nebraska: how it used to be an ancient ocean, how today’s farmers harvested clicks more than corn, how a century-long drought marooned the last king on a faraway island, how every August, angels dusted the crops.

Billy James listened to my story, the first I’d ever told, and then we were quiet. The silence between us felt long and sharp, neither of us courageous enough to shed it. Then Billy James stood up, dusted off his bum and invited me to dinner. I was touched.

It was a wonderful dinner party. To my left was a Dead King with kelp for hair. To my right was a Fallen Angel on crutches. Across from me, a robed Latin Scholar debated Billy James’ interpretation of a shelled prescription. I looked out into the ocean, saw monster waves batter the coastline, and realized where I was.

The plan was to go to the river and drink all the beers.

“But first,” said Peach. “I gotta fix my brake pads.” Peach jacked up the van and shimmied un-der. I worried about his white jeans. Well, once-white. I went into the discount grocery store and bought us a case of beer, a bottle of tequila, and a pound of strawberries. I cracked one, two beers and stooped around while Peach jiggered the pads into alignment or whatever.

Peach lived out of his van, drank Coors light, and worked on pot farms. It was dry season so there was no work to be had. But Peach wasn’t bothered none.

Before I could finish my first beer, Peach said, “Fuck it” and skated off to wash his hands. His mask, once mountain dew green, was as dirty as his white jeans. Both were immaculate and cool as shit.

I first met Peach Christmas day. Each winter, Peach sojourned from buckets of sunshine out West to his family farm, a dozen or so miles outside of town.

Anyway, there was a house show in a basement not far my friend’s and that’s where I met Peach. His getup was unforgettable. He wore a grimy all-white track suit crusted with lord knows and a white KC Royals hat with a mangled brim. He wore his hair long and his nails long-er. A strong look.

4am and I was still dancing with Peach and I may or may not have been in love.

I saw him again, to my delight, at karaoke a few nights later. He was wearing the exact same thing. He didn’t remember me.

We hopped in the van, river bound. Peach fished out a screwdriver from the glove compartment and jammed it in the side of the driver’s wheel and shifted out of park. “Let’s take a quick stop by American Cancer,” Peach said and humped out of the lot. American Cancer was a thrift shop, but I wished it was American Healthcare: mangy and cheap. I bought an oversized button-up, perfect for barbecues. I was ready for the river. I was ready for all the beers. I was ready for something to end.

En route, Peach told me about a town called Samoa he once called home. Samoa was where someone famously captured Big Foot on camera: mid-stride, head cocked to meet the photogra-pher’s protruding eye.

Peach told me his Samoa neighbor was a bounty hunter and Big Foot was on the top of his list. Asked if he believed in Big Foot, Peach said, “Oh yeah, he’s out there. He’s probably every-where.”

“But the best part about Samoa, is it’s too small to have a cop.” And to that we cheers’d and downed another road soda.

Down by the river, a fat, squinting chihuahua sauntered by. “Hello, Gordo,” said Peach. “Gordi-to, mi amor.” Gordo’s tongue was way too big for his mouth and hung out the side, like a loose cigarette. Gordo was an old pup. His tushy was nearly bare of hair and his tail was feathered with slight wisps—a beige peacock in winter.

Connor Goodwin is a writer and critic from Lincoln, Nebraska. His writing has appeared in The Atlantic, Washington Post, High Country News, and elsewhere. Validate him on twitter at @condorgoodwing.