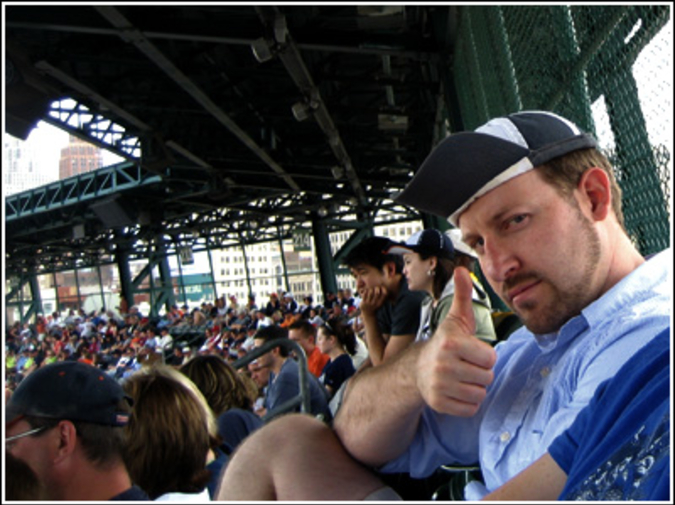 Swing Through
In sheer disbelief
Having swung through the fastball
He lowers his gaze.
- Jon Sindell

Greg Beatty lives with his wife in Bellingham, Washington, where he tries, unsuccessfully to stay dry. He writes everything from children's books to essays about his cooking debacles. Greg recently published his first poetry chapbook Phrases of the Moon. It is available from Spec House. For more information on Greg's writing, visit www.gregbeatty.net.

Brad Epperson helped put this issue together, and edited a web issue, "stories that Brad likes," a few years ago. He really has no business contributing to Hobart, or anything else for that matter, and the mere fact that we let him guest edit once is a testament to our bad judgement. However, he can hit a baseball really far and that has to count for something. Seriously, he and Aaron played "home run derby" a lot when they were kids and if you've ever seen both of them, you'd know it really wasn't much of a competition.
Scott Garson has stuff in current issues of Avery Anthology, New York Tyrant, SmokeLong, No Colony and others.
Susan Olson Lawson earned her MFA from Queens University and taught at the University of North Carolina at Charlotte. She is an advocate for young adult writers, a fan of the fiction of Elissa Schappell and Naeem Murr and has never been any good at chopping wood or pitching.
Kenneth Nichols studies fiction in the Creative Writing MFA Program at Ohio State, where he also teaches.
Jenny Poore is a Red Sox fan living in Virginia. When not chasing her children she watches the Red Sox on TV and writes short stories about chasing her children.
Jon Sindell is a San Francisco-based writer whose work has recently appeared in New South, Many Mountains Moving, Word Catalyst, and Word Riot. His proudest baseball possession is a Vin Scully autograph on a lit mag bearing Jon's baseball story laced with allusions to Vinnie. Communications regarding baseball and writing gladly received at jsind@sbcglobal.net