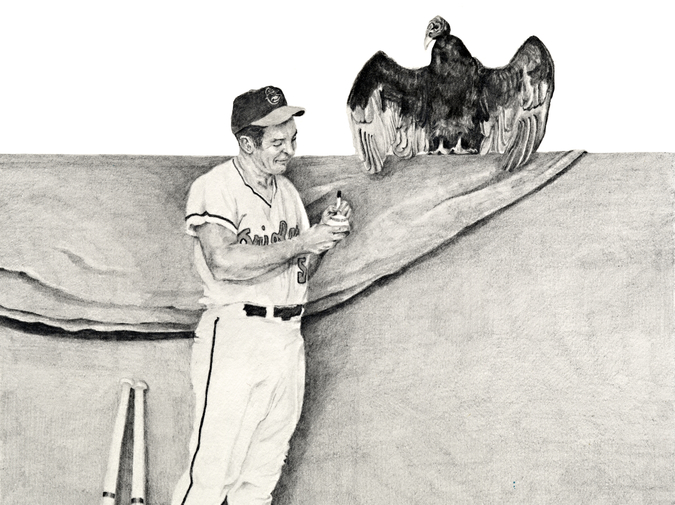 I have torn up the boy whose baseball
You are signing again.
He was beautiful,
As you are, Brooks Robinson,
As you lean your name back, a lefty’s autograph,
Your glove hand, the one that flops
To the dirt behind the bag,
The greatest feeling a human body could know,
The heft of ball in web.

I circled him for years and grew to love the game,
As the boy caromed a tennis ball off brick steps,
So for a moment, he could fly, too,
Snatch it before it rolled into the rhododendrons-
His Orioles cap bent in the dirt-
And sling it back against his small house,
As the full summer trees gasped like a rising crowd.

But when I found him dead
And beaked at the bones,
His glove was holding this baseball,
Bloodied, deeper than the orange of his brim.
So beautiful, Brooks.
I wanted you to know. 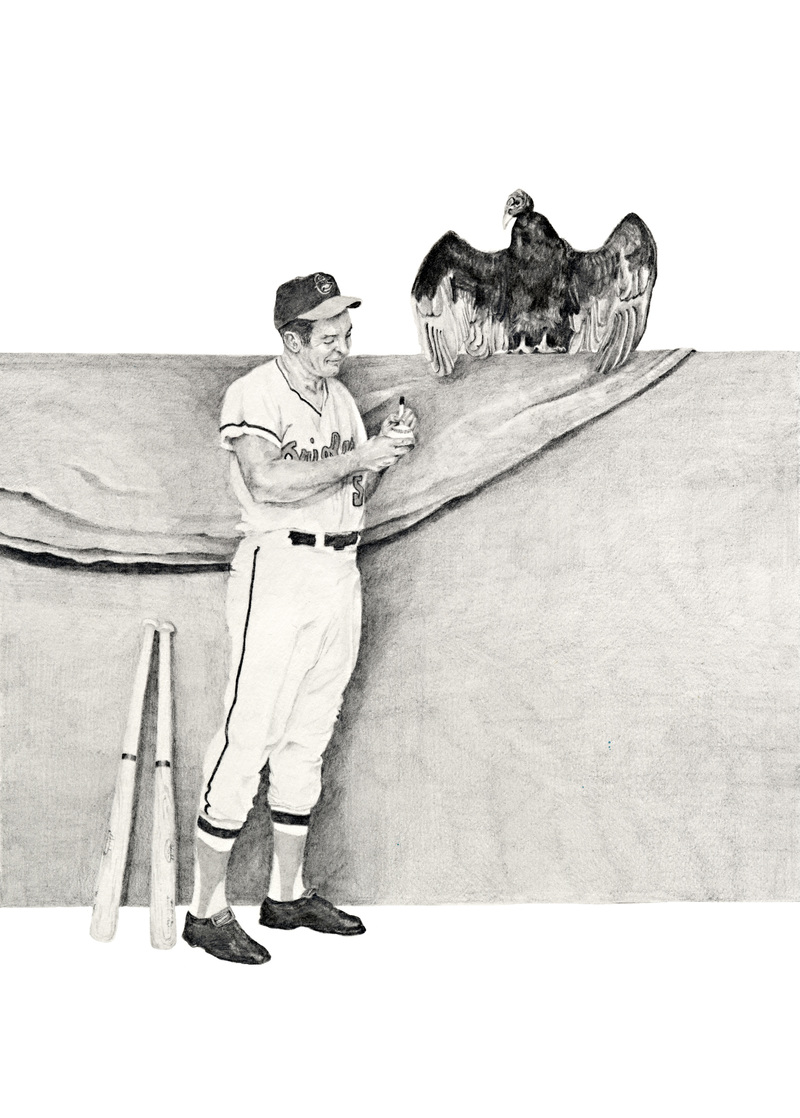 Scott Palmieri is a professor of English at Johnson & Wales University in Providence, Rhode Island. His writing has been published in Sport Literate, Aethlon, The Leaflet, and The Alembic. He played baseball at Providence College and continues his love of the sport through writing, coaching Little League, and playing, as long as his legs will allow, in a senior men’s league. He lives in Wakefield, Rhode Island, with his wife and three children, his biggest fans.

Aaron Collier is a visual artist living in New Orleans. He teaches drawing and painting at Tulane University as an Assistant Professor. Solo exhibitions of his work have occurred at Octavia Gallery, Cole Pratt Gallery, and Staple Goods, an artist-run gallery in the St. Claude Avenue Arts District. He has participated in recent group exhibitions at The Clemente in New York and the Ogden Museum of Southern Art in New Orleans. Additionally, his work has been featured in New American Paintings and is represented in such collections as the New Orleans Museum of Art, Iberia Bank, and the Boston Medical Center. He has been awarded artist residencies by the Ragdale Foundation, the Virginia Center for the Creative Arts, the Joan Mitchell Center in New Orleans, ISCP in Brooklyn and Open Ateliers Zuidoost in Amsterdam.